It's been a year, and Mary over at Chasing Mailboxes is running the Errandonnee challenge again. Yippee! I just found out about it on Monday, which means I almost missed it! The challenge runs for 12 days, from March 7th to the 19th this year. I lucked out big time in that she has given us a snow day. Lucky me, right?!

I found out about the challenge Monday after my morning route, which pretty much means that day was sort of shot in regards to errand-running. I spent my between-route time printing out the control card and re-reading the rules. I may have cheered aloud when I read the revised darkness rule. 2 errands had to be run in the dark last year- no problem when it was still daylight savings. And it wouldn't have been a problem if I'd have known about the Errandonnee on the 7th, and had time to plan.

You see, I haven't been riding my bike all school year. I ended last year driving a bus (I think?), but it was a small bus. Small buses don't require a class B commercial driver's license to operate, and so the district doesn't pay drivers of small buses as much as they pay drivers of regular buses. I was also under the impression that this small-bus route was at risk of being dissolved. So, now the proud owner of a New Beetle, I jumped at the chance to drive a big bus. The route I won was at the far terminal, 12.5 miles away without a reasonable (to me) way to bike there safely.

Eventually, I finally won the bid for a west route, but it was only recently. I got the route at the end of January, and I thought my first few commutes to work might kill me. I was right back to struggling in the easiest gear I had to cover ground. Not that much ground either- the new rental house is just over 2 miles from work, almost 3 for the return trip. It should be easy. But there is a monstrous hill in the middle of that, and its all on streets. No more greenway for me- it was mostly destroyed in the flood even if I did have the energy to cover a bit more distance to get to it.

The reason I mention all this is because my friend, who I now live just a few blocks from, has been giving me rides to work. This lets me sleep an extra half hour at least, as well as rest my poor legs. I think at this point- a full 2 months later, I can safely say that I would not die making the commute 4 times a day instead of 3. But I still can't bring myself to give up those precious extra minutes in bed, plus unless I want to hang around at the office, I don't really get to see my friend for the rest of the day. So anyway- I'm very glad the darkness rule was only  suggestion this year.

Day 1 for me was only the afternoon trip to work. Not exciting, not really even fun. The wind likes to make life difficult. 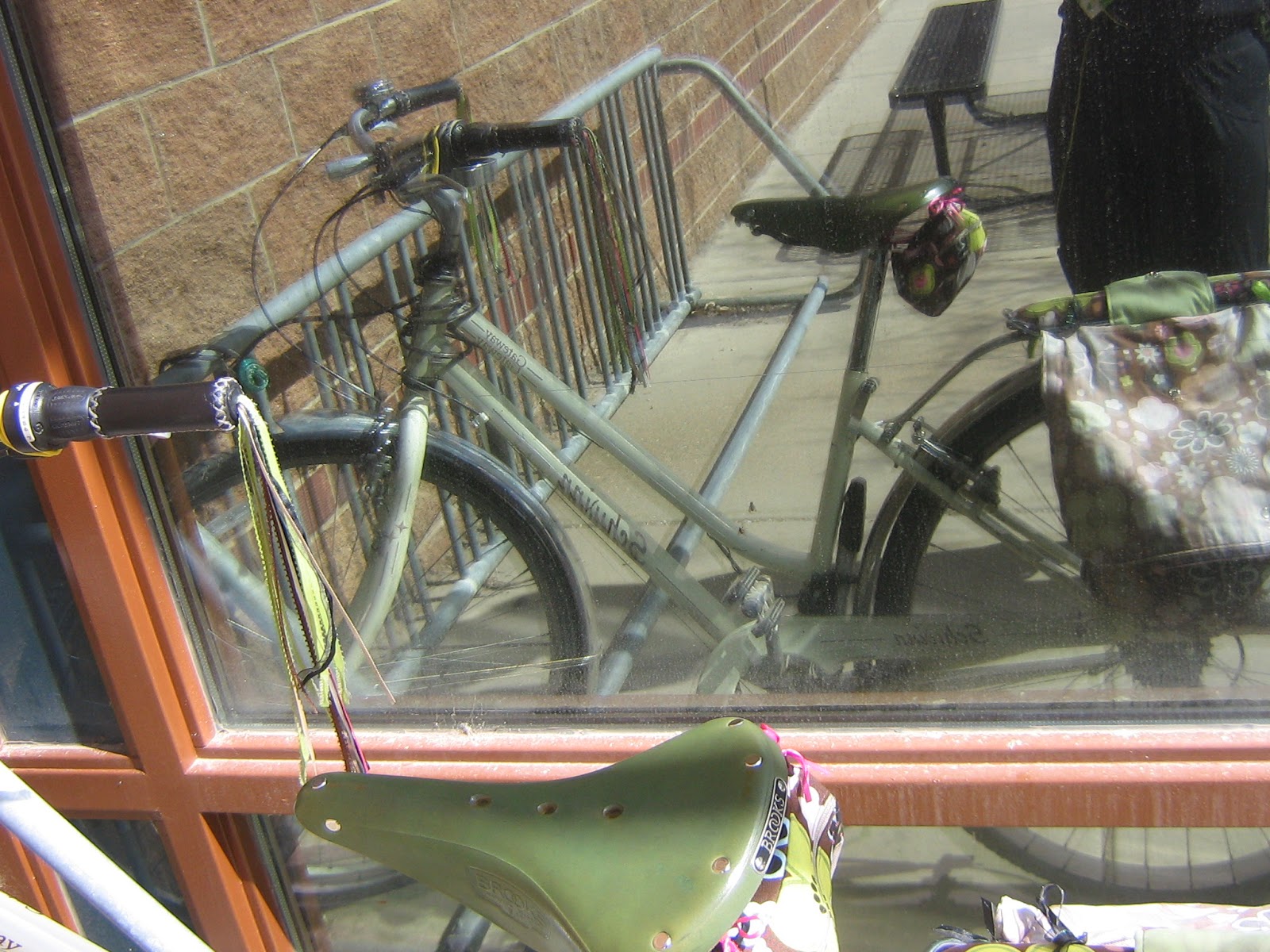 This is a reflection in the office window of Zoomie parked at work.

My observation: one of the students on my bus wrote his name for the new assigned seats. On the bus wall. In Sharpie. /sigh.