This week started off a little rocky with the kids from the high/middle schools. They are used to being picked up at a certain corner, if I haven't mentioned this previously, and their stop has been moved a small distance to a corner opposite. They also have another stop on the same side of the road as the old one, also only a block or less away, in case they don't feel like crossing the 25mph road (coming down from 40mph).

I told them the last couple of day last week that I would not be able to pick them up there because that was not an authorized stop, it's been moved, yadda yadda. Well they were there Monday again. I asked over the radio if I could pass them by, dispatch of course had me grab them. I told them again. (Meanwhile the afternoons are totally under my control, they have only been let off in the right spots, mind you.) Tuesday, I didn't ask over the radio, but I had permission to get the point across another way without abandoning them. I passed them by, after stopping at their authorized spot and calling out the window that they should come over if they wanted to go to school. No one moved. So, I turned the corner, and promptly proceeded straight past them without slowly, to the next stop. A truck immediately pulled out to follow me and a dad or someone got out and felt like arguing with me. I was very polite, I think. He was going on about why did I pass that stop, and its the right stop of course because it was there last year, and how could we want these kids to cross a highway... I advised him that the stop was changed the end of last year, this was not a new change, there was this stop I'm sitting at if he would like his students to not have to cross the road, although a 25mph speed limit did not constitute a highway. Anyway, he looked like he'd argue all day long, so I then interrupted him as he was about to start again and asked him if he would like to number to my supervisor to discuss the matter further. With a smile. Of course he immediately jumped at that chance, and I wrote the number (rather badly, as my fingers were stiff from the slight chill and I hadn't worn gloves) for him. Then I closed the door and pulled over with my hazards on and the group of kids who had been walking while I was talking boarded the bus. They were quite upset.

So Wednesday comes, and again I've warned them that their stop was not this particular corner. Again they are waiting there. I do the same thing, and they walk very leisurely up to the bus while I wait pulled over. I tell them tomorrow I will not pause. I say it again that afternoon.

They decided not to call my bluff (which it wasn't, I was gonna leave em!). Yesterday that corner was deserted, and I had a few at the catty-corner, and then the rest must have been at the stop a block away. I was slightly disappointed in that evil way that wanted to be mean. Oh well.

Now I'll be writing a referral on Monday for the punk who thinks its funny to stand up when I'm halfway down the road to his stop in the afternoon. He stays standing until I stop, even though I asked him to sit down. I also warned him first that I'd write a referral today if he didn't quit. Well, I asked his name and he did a "pfft" and promptly got off the bus. Really? His referral just got the maximum I can put on it.

Overall, things are settling down. I hope I don't lose this route with the next bid. It's 3.5 hours and that's pretty decent. Plus I'm just starting to recognize faces and try to remember names.

Almost every day I'm learning something new. Today I took my bus to get washed. There's a bus wash here! I think I'll go every week. It's like an automated car wash, only 30 seats more awesome. It's not near as long as being in a car, either, which surprised me. The man, who directed me into the right position, also squeegeed my windshield afterward and dried my mirrors. Shiny bus! Drat, now the inside looks that much worse. The dust here is everywhere, I feel like I need to mop the floors, they look only marginally better from sweeping. Also, the dash is awful. I wiped some of it off with tissues, but it needs a good wipe down.
I've been told how to pull over to let other buses by for the combination school. Of course, I did that but pulled up too far I guess. So the lady in front of me was chatting with me about that today. Also, I've been told how to drain the air system, and that I don't have to pre-trip AM and PM, just once per day. I can also turn right on red here. Slowly but surely I will stop being a total newbie.

As for me, I'm doing great. I ride my bike back and forth to work twice a day, and to various stores when I want to. I went to Walmart, Fred Meyer (Walmart competitor) and to downtown to see the bike shop. They gave me a map, which is great, because I didn't want to print one out. I've marked places on it to find easier. It's better than a regular map because the multi-use path is on there. I also went to Jo-Ann today. I got lots of coupons and have also needed a beading needle, and was itching to make some streamers for the bike. After a fun bit of back-and-forth sending of pictures to narrow down four fabric to just two, I got a cute fabric that I want to make a basket liner and handlebar bag from. 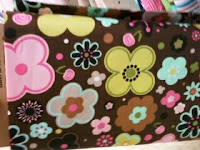 I picked out a bunch of ribbons to match to make my streamers. They came out awesome! 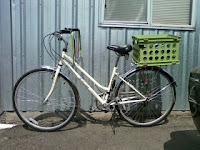 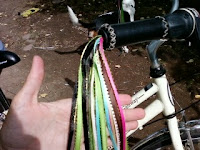 I ended up using a flat precision screwdriver to pry the handlebar endcaps off after asking youtube how to attach streamers. I used a philips head screwdriver to sort of twist-bore a hole into the ends. Then I got my ribbons and cut them, and sealed them with a lighter. Tied a knot, threaded them in, and Ta Dah! Happiness in ribbon form. They flutter in the breeze somewhat randomly, usually one side better than the other for a while. The ribbon is shiny in the sun and the black half-sheer one has a metallic green center that flashes. I tried the record them, but my phone takes yucky video and I didn't think to dig out my camera.
This morning was cold! Cold is apparently below 50F. At 50, I can wear a short sleeve shirt and my windbreaker, which ends up all the way unzipped and I consider the worth of stopping long enough to take it off sometimes. My upper arms get warm and confined-feeling about halfway through the ride. By the time I get there I'm glad to get it off. I have done my white knee-length shorts at this temperature fine also, it just takes a second for me to warm for the wind to stop chilling my legs. My jean skirt is cute, but slightly too tight to bike in. I had my bike shorts underneath anyway, but it rides up as my legs go up and down and the nose of the seat also helps make it ride shorter than I want.
However, my boots are totally fine on the bike. Since learning how to have the seat adjusted I've gradually gone from putting my foot centered on the pedal to having the ball of my foot there like I'm supposed to. (I remember trying it when I read about seat height and thinking it was weird.) This means that having a higher heel doesn't matter to me at all. Actually, stepping down at intersections was kind of nice, not so far to step. The boots made me feel kind of girly and pretty riding down the road. I need to make sure to wear my tall socks with them though, because calves do sweat a little.
Now I need to do something with my awful blue helmet! It doesn't match anything, and I feel awesome when things match nicely. I've considered paint, and also maybe trying to cover the shell with fabric, or weaving my ribbons like plaid over it.... Not sure yet.
Oh and.....
I need a hanky. A two-toned one, so I know which side is the snotty one. I've been carrying a viva paper towel in my windbreaker pocket, but it's kind of a pain to unfold one-handed to use. I knew I'd need more than just a flimsy paper towel today (and that brand isn't one to scoff at either). I grabbed a white wash cloth to be a hanky. After a couple uses, I was glad I had my gloves, and I had to look careful because I wasn't sure which side was which! I got it wrong once, but not catastrophically.
And most of the reason I have such a horrible nose today is because: guess what?! My wonderful immune system shows its patheticness yet again with an astounding record-breaker of the EIGHTH day of school to catch the cold. Yes the, because it's virtually guaranteed that throwing all these kids together to share germs will spawn something that your system hasn't seen before. Yay me. I hope it gets better over the weekend, because I've been tired-feeling all day and it's been hard to concentrate. It might be showing in my writing today....
Tonight Jamie is already at a friend's house fixing the brakes on the black car. We took it over there last week. Our friend is making us dinner so we have sort of a hang-out night planned. Also this weekend we'll be going to Medford to look around. Oh, the Target is there! I need to spend my gift card. I need bike lights before it starts getting too dark, that sounds perfect. The rest can be candy or something.
I know I said we were going to the fair last weekend, but really it isn't worth mentioning, it was ridiculously tiny. After we found out, we figured it's not that much of a surprise that Deland's fair was huge, since it was populated with so many rednecks. Next time we'll try for the Oregon state fair. I thought being in California this one would have been big, but it was a small county fair instead. Klamath's was bigger, but still small. I'm looking forward to Medford and a mall. Really it's not very far away, only an hour and a half.
So goodbye for now, and I'll let you all know how things went! Happy Friday!
Posted by Red-Eyed Tree Froggy at 6:26 PM 2 comments: