On the way to work this morning I fell off my bicycle again. The roads were wet at my house. The temperature was hovering above freezing there, according to the thermometer. Somewhere along the way the simple wet turned into slippery frost or ice, and I was unaware. I was worried at the time because my headlight batteries were failing.

Anyway, I was going too fast and tried to turn, and ended up on my butt skidding backwards down the road. I suppose I might have panicked since I wasn't looking in the direction I was headed. I remember being worried that I was on my butt, and that maybe I was ripping jeans away little by little and soon it would be skin. I also had my right hand dragging the ground trying to stop my slide. I knew my glove was getting ripped, but I remember deciding to push down further to try to stop sooner. It worked, but my glove is ruined. Turns out my jeans are fine. I lightly banged that knee I hurt earlier, and the heel of my hand stung a bit from very minor rubbing that my glove saved me from. 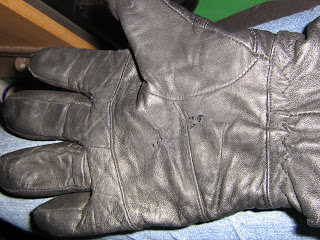 So, I immediately cursed Mother Nature and Zoomie as well, and when I got home I looked up studded tires. Originally I asked my parents to get me those for my birthday, but it's supposed to snow tomorrow and well, they are stupid expensive. I've seen how to make some on forums, so I figured we could try that. Jamie said if we messed up he'd get studded tires for me and new regular tires in spring. So... 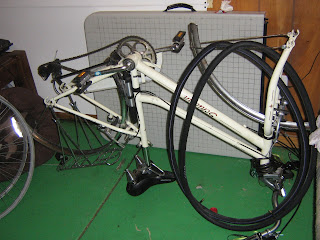 Zoomie in for surgery. 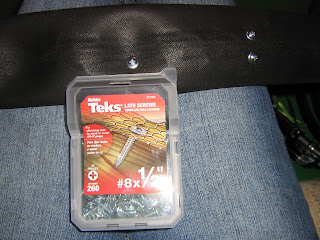 The surgical instruments. Also a Philips screwdriver, duct tape, and bolt cutters.
Step 1: Dismount tire and turn tube inside out. Commence adding screws from inside pointing out. I had marked the locations with a silver sharpie on the outside of the tire, but that turned out to be a futile gesture. I got better at aiming with the second tire, though. You just want the screws pretty evenly spaced. 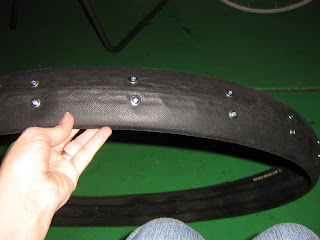 Inside out tire with screws being installed.
Step 2: Cover screws with duct tape. 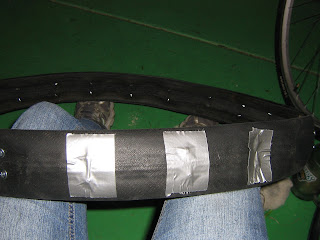 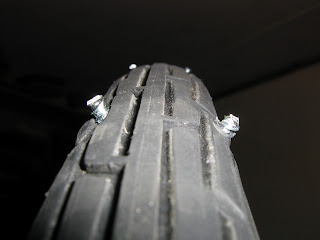 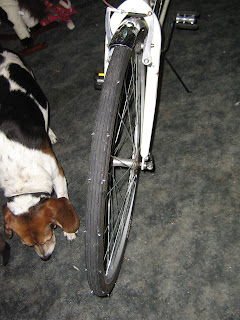 I haven't ridden the improved Zoomie yet. We're giving it the night to recover (and see if the tubes go flat). However, just rolling it along didn't seem too bumpy, but the screws were very obviously touching- so they should theoretically provide better traction for me out there.
We shall see!
Posted by Red-Eyed Tree Froggy at 9:29 PM No comments: