My twin sister's boyfriend posted a photo of pretty scenery taken from the inside of their vehicle this morning- he's a paramedic (is that the official term? I get confused) so it wasn't during a commute, I think, but part of their job.

Not to be outdone, I simply HAD to share pictures I took this morning as well. I was going to share them anyway, I just think it's funny that my morning was SO GORGEOUS also. I may be biased, but I think mine are prettier. 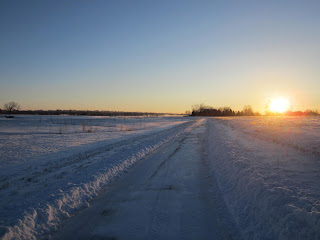 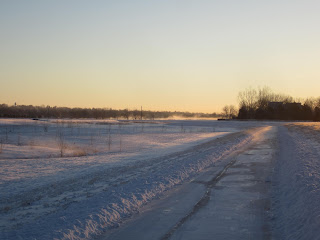 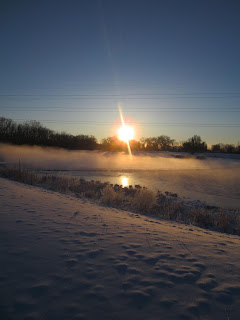 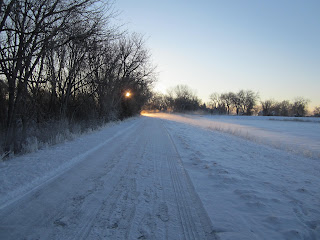 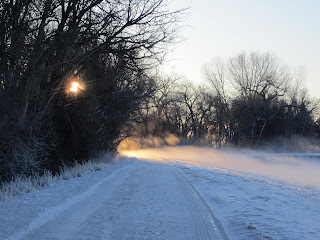 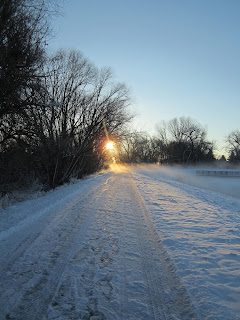 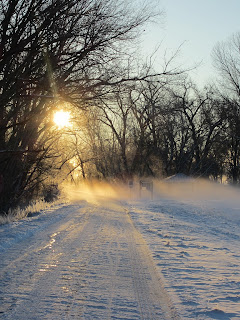 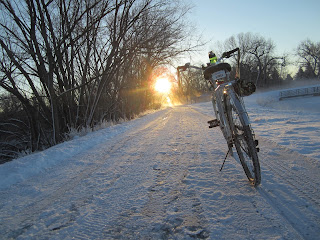 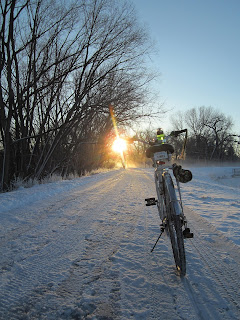 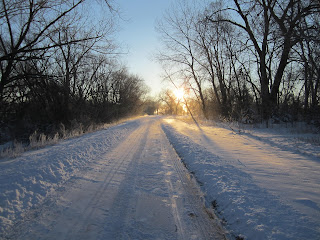 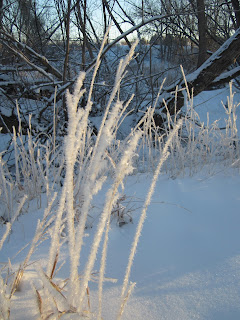 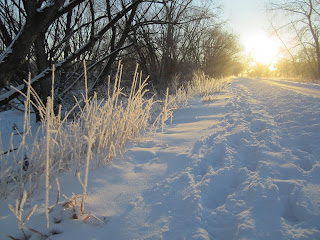 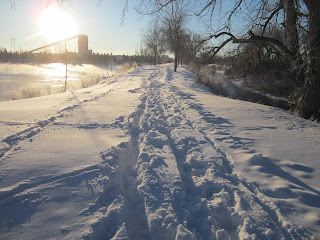 I thought my plan to survey the roads and use them in the case that the greenway was unplowed to be a smart one. In EVERY previous instance of snow, the no-man's-land between the last park and Airport Rd, I think that section is called Lykin's Gulch, is the very last part to receive attention. People just don't use it much, compared to the other parts near parks and closer to town. You're either out there commuting purely to get somewhere, such as myself, or you are out there for fitness reasons. It. Gets. Plowed. Last.

I got all the way to Hover Rd on the icy, bumpy, perilously plowed pathway. At the park there (I've looked it up, it's called Roger's Grove- fitting since that one has the orchard in it), the plowman gave up. He abandoned us. Got tired? Something. Ha ha, trudge through the snow now. It's only halfway up your bicycle wheels. Drifts touched the axles.

It's the deepest snow I've cycled in to date, and I REALLY wished that my tires had some tread in them. It didn't take me long to realize that uphill was impossible, even slight inclines. I also learned that making my own new trail was better than trying to follow the one already there (I think someone rode a dirt bike through there- those tracks were HUGE! The track was icy at the bottom, and it's impossible to stay on it while keeping your own balance. Meanwhile the untouched snow was actually fluffy and pretty loose, so as long as the wheel kept turning with traction under it, I was fine. Without traction, it spun wildly and soon I had to get a foot down or fall over. Trudge, trudge, remount. Try riding again. Repeat a little distance further along when a deeper drift would slow me too much and cause another spin-out, or the path dipped upwards again.

It was highly amusing to look back at the tracks I was making- sometimes a crazily-crooked rut with footprints slogging along beside it, sometimes just a nearly-straight rut in shallower or flatter places, but mostly a rut surrounded on either side by random holes where my feet turning on the pedals were at the lowest points in the rotation.

I realized that if I wasn't hurrying, I'd be late, even as early as I'd left the house. It took me an entire hour to cover my usual 30-minute route. Also, if I hadn't been worried about being late, I would have been having SO MUCH FUN! It was kind of fun anyway, even as I was cursing the city folks for my assumption of a fully-plowed greenway system.

My camera died before I could get a proper shot of wheel and snow-depth. Oh well.

Good morning!
Posted by Red-Eyed Tree Froggy at 9:47 AM 1 comment: