I received yet another bicycle, from a nice gentleman who helped me the day Foreman's axle nut came loose. Every time I tried to pedal, the loose axle would swivel due to the pressure from the chain, and instead of going anywhere, I only succeeded in pulling the rear wheel crooked into the frame. I needed a wrench to fix it, and he had one. After a bit of long-winded conversation, I left with a re-tightened nut and an invitation to check back and see if his wife said yes to give me a green bicycle I had noticed sitting in the driveway. The poor thing had two flat tires and a rusted chain.

Well, I saw the man waving from the window on the way home one morning, and to make another long conversation short, I was of course allowed to take the bike.

I'm beginning to see how a cyclist can easily amass a whole herd of bicycles!

I have removed the studs from Zoomie, and in the process I aired the green bike's tires. One had a puncture from a tiny thorn. A bit of prodding with tweezers caused it to back out without too much fuss, and my new patch kit did not come with Fail included. So both tires were just fine. The rusty chain only has a few stuck links, which I think will work out with just a little bit of regular riding. I had to get Jamie to muscle the bolt for the handlebars loose so I could have room on the stem to put on my headlight. I also adjusted the brake levers to a normal angle and raised the seat too. I like having a nut on only one side to worry about tightening or loosening.

Throughout all of this, I was enjoying a delicious banana daiquiri that Jamie had made for me. It didn't actually have chocolate in it, I think, but he made it delicious anyway. We had just finished watching a chili and chocolate Iron Chef battle.

So, now my new bicycle is ready to take me through the promised snow tomorrow morning. Hopefully those big huge tall treads will not let me fall down easily. If they do, we will stud these tires (the method for knobby tires doesn't endanger the inner tube at all).

Here are some pictures, as requested. Foreman will become Jamie's bicycle, he says he likes the index shifters better than twisty ones. 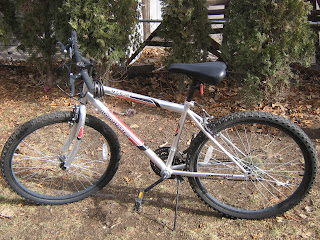 Foreman in the sunshine. He is named for Red Foreman in That 70's Show for the red bits on him. We got a blue Next bike also when we got Foreman. Both were free from a coworker. 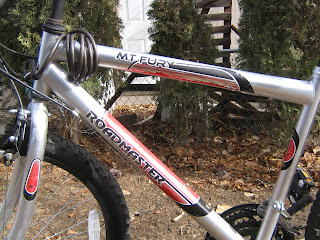 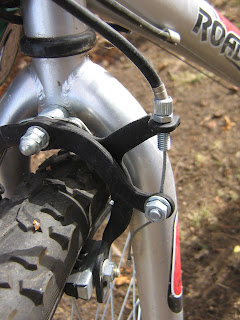 Really annoying brakes. How are you supposed to easily release them to change a flat tire? Also decent knobby tread. 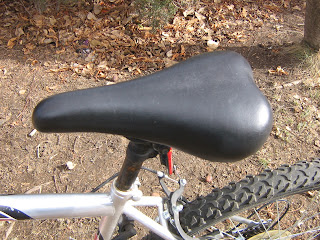 The seat is not as uncomfortable as all Roadmaster seats I've sat on. Perhaps riding Zoomie helps you adjust. After several days I did have some bruising though. I know from experience that would go away after a while. 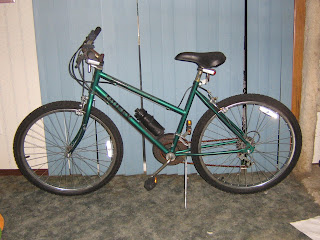 And the green bike (unnamed so far) from Richard P. Thank you! See the rusty chain? 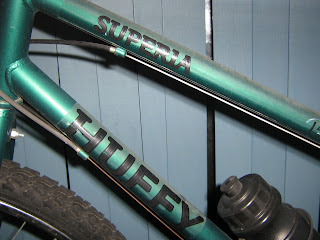 Apparently she is a Huffy Superia. 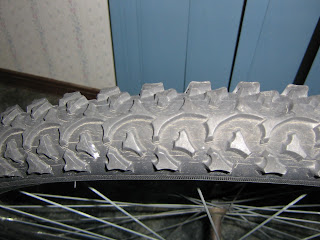 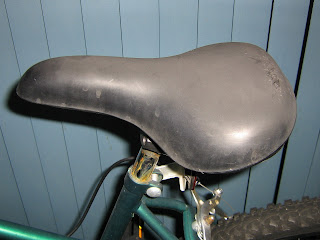 Another hard seat. I'm sure it will be fine. It looks dusty here for some reason. 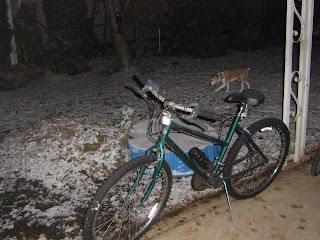 The beginning of the snow that this bike is supposed to conquer. Jackjack says it's not so bad.
We'll see how she does tomorrow! I invite everyone to submit their ideas for her name just like we did with Zoomie Noodles. Nothing is too ridiculous, I promise.

Now it's time to finish my drink.
How did you finish out your weekend?
Posted by Red-Eyed Tree Froggy at 9:11 PM No comments: