Yesterday was a great Sunday.

My friend and roommate wanted to go bike riding, but I'm the only other person with a bike right now. I've wanted other people to ride with for a while now. Jamie has a bike borrowed from a friend also, the bike that makes me paranoid of thieves. My roommate wanted the bike ride to be a family deal, so that meant going to the store to get him a bicycle, and them all some helmets.

We had a great time picking out helmets for their little daughter and feeding her a cheeseburger and chasing her around the aisles while a great employee named Eric searched for the specific bicycle we were asking about- the Next Parowan which had gone on super-sale for Black Friday. As I might have mentioned earlier, we were in Wal-Mart to try and get a Kinnect on that busy shopping day (they got a better deal later on anyway, so ha!) and I knew those bikes had been available, but were never even assembled at all. Eric went and found keys to an out-of-the-way shed and located the bike we wanted. He brought us a girl version. Bright pink. We sent the poor guy back to relocate keys and dig through the stuff to find the nice white male version for us.

Bike box, helmets, and child in tow, we found a price scanner on the way to checkout. The price was still the $50 discounted Black Friday price! (We were requesting this particular bike because it was still listed as the cheapest one available at $60, our next option was $100.) We debated only very shortly, and then sent another great employee, Craig, to track down poor Eric before he left for lunch to get us one last bicycle for Jamie. We figure we'll pay our roommate back in small installments as we have extra each month from bill-paying.

Craig, who had been headed way on over to pet food when we interrupted, found us again later then hauling two bike boxes awkwardly through the store with armloads of baby and stuff. He grabbed a spare merchandise cart for us and helped get the boxes in there, then followed us to checkout where the lady had a gun to laser beam the bar codes for us.

Bike rack nearly useless, the boxes got perched into the trunk and tied in with the lower rack straps. Homeward!

We got home just find and unloaded everything, then started assembly. These bikes were packed better than my Schwinn, so had no scratches or anything at all, but they weren't nearly as far along in the assembly process. Brakes needed adjusting, derailleurs didn't cooperate, generally frustrating things. Poor Grunt saw us all with bikes being fiddled with and the trailer coming out and even though he disliked it very much when I tried to get him in the trailer once, he knew we would be leaving and he wanted to go very much.

Finally we had things pretty well together, I had my water bottle and extra bike cable lock plus some washrags if anyone needed hankies (not sharing, thankyouverymuch). The boys had match brand new bikes, I had mine and our roommate had hers minus the gel cushion which she graciously gave to her husband. Little Marty was NOT happy in her trailer chariot. She had tried to take a nap on the way to Wal-Mart and woke up when we arrived, so crankiness was expected, but still not pleasant. Finally she fell asleep in the trailer as we pedaled. We should get her a neck pillow, I think. 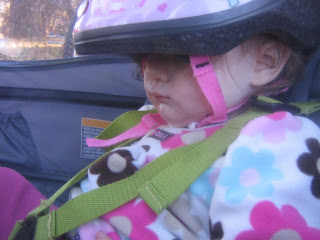 We had to stop several times, but I didn't expect a flawless first try. One of the new bikes gave our roommate's husband a hard time. The tire had inflated not fully seated on the rim so after a while, it bulged out. We noticed this during the first stop which had actually been to allow him a rest. So I got my nifty little frame pump (thanks dad!) which lives attached to my seat post between it and the rear fender on my awesome bike (thanks mom!) and passably fixed the tire with Jamie's help. The front wheel also had become untrue very slightly due to the weight of a rider and probably the fact that really cheap bikes usually don't have great wheels with even spoke tension anyway.

A little after that, we stopped because that bike was not shifting properly on the front cassette. It turns out the derailleur is bent and gets stuck on the little plastic ring that sort of serves as a chain guard outside the biggest cog. We talked about various things I learned about pedaling cadence (pedal easy and faster, not slowly trying to muscle the bike forward) that might be why he was tiring out quicker. That the front cog should sort of stay put while the rear one went up and down to make pedaling easier. He had sort of lost patience at that point, or maybe pain tolerance, and he walked the rest of the way to our destination- Black Bear restaurant. 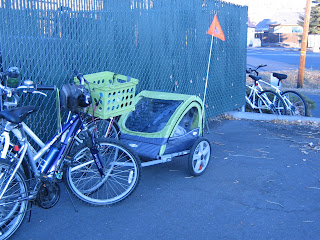 We got all locked up against the fence behind the restaurant because I hadn't seen that there was a nice whole parking spot corralled off with railings for the paper dispensers. We know for next time that we get preferred parking, whoo. I'm proud of my cable lock for being able to stretch through TWO bicycles wheel-to-wheel.

Black Bear might be my favorite restaurant here. They have monstrous portions for very reasonable prices, and a great variety of food, though breakfast is still my favorite meal. Plus, how can you not smile at such a lovely themed place? They love bears and there are statues and pictures and paw marks everywhere.

We ate and then sent Mr. roommate across the street with his bike and a lock to pick up some things at the grocery store while the rest of us rode home. We unpacked everyone and then drove to get him and the few groceries on the way to a yummy dinner at their parent's house and some card-playing.

All in all, I'm very happy with our first big bike ride. It wasn't the greatest, and we had some troubles, but we did make it, and I had a great time. A bike exchange at Wal-Mart and a different bike seat should solve things nicely. Soon we'll go on bike rides so often that it will be routine and I'll have other topics to get excited and write about!
Posted by Red-Eyed Tree Froggy at 11:55 AM 2 comments: