Fun at work and at home!

This week can be described in several ways: gloomy, rainy, chilly, fun, unusual.

The weather turned both cold and rainy, and today was the first day I've seen the sun nearly all week. Tuesday promised 70% chance of rain, and was also the date of the Warcraft expansion. Since the game would not be playable until after midnight, I decided to spend the waiting time by sewing the cloak which I had already mostly cut out. 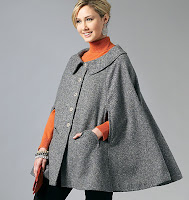 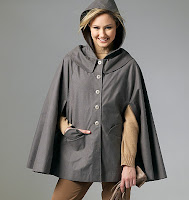 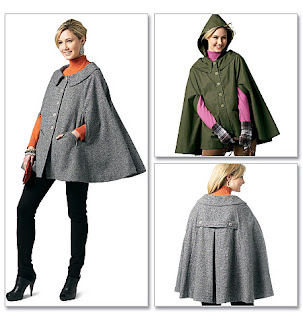 It turned out that I had JUST enough fabric to make the cloak- I wanted to make my cape from the green Babyville Boutique PUL (polyurethane laminate) waterproof breathable stuff that I had gotten originally to make my bicycle panniers from. This way I'd have not only a green cape (like a froggy version of Little Red Riding Hood), but a useful weatherproof article of clothing to protect from the coming snow, not to mention the storms predicted the next day!

My cape turned out lovely! Some photos, sorry for the blurry ones. 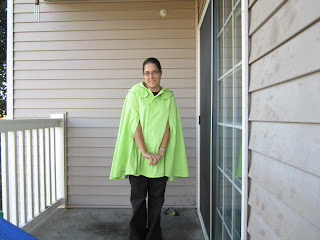 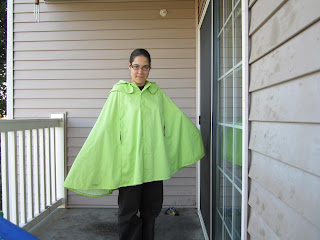 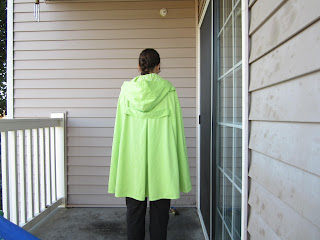 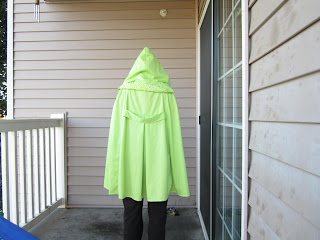 Silly collar.
You can see the lining though- it's what I made my green jumper from! 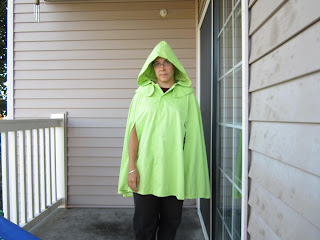 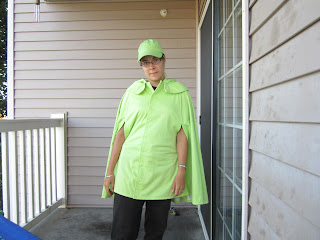 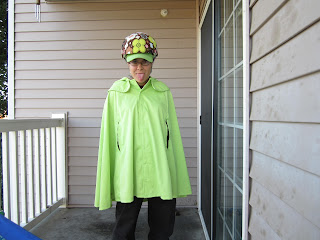 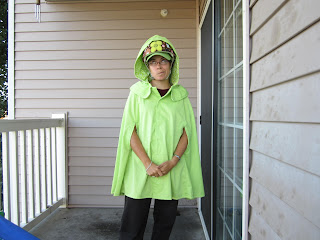 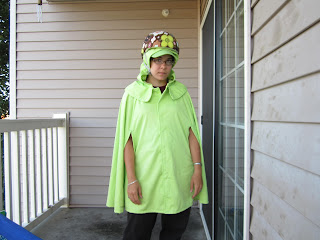 I'm not really done with it yet. There are no buttons, I simply put a few stitches where buttons should go. Five buttons is not enough- they will need to go all the way down to the hem. I may even need to add a flapped zipper for further frontal weather-proofing. With only five buttons, the front gaped open and the bottom flapped and did not cover my legs. I think a zipper will be needed to make sure that the holes between buttons don't let in rain, since it is the leading surface. There should be a button holding the collar closed also, but since I sewed the front shut, I wanted to leave enough room to pull the cape over my head. I will most likely add invisible zippers to the arm slits. They are handy if you need to do things, but on the bicycle I will likely be riding with my arms inside so that the cape is held over me protecting my legs, and also to keep my arms dry from the elbow down. I'm not entirely certain how to wear the hood. Yes, it kind of fits over the helmet... I'd have to secure it up there somehow to keep wind from blowing the hood back off. The last photo is how I wore it Tuesday morning. I need the hat to protect my glasses from excessive rain so that I can still see through them!

This week was also CPI training. It stands for Crisis Prevention Intervention. We were taught non-violent ways to deal with acting-out individuals. Basically, we learned how to react to anxious, defensive, and finally acting out people. I do most of the stuff they mentioned already just by being nice. If someone is having a bad day, you offer support and such, if they are misbehaving, such as not sitting in their seat, you offer ultimatums with positive options first. You'd say "Suzie, as soon as you sit down we can go home" and then the "if you can't sit properly I'll have to write you up". That kind of thing. Nice people sort of do this already.

What I thought was the best part of this class, though, was the section on physical contact. They aren't teaching us how to deal with violent behavior or how to properly restrain such individuals- that's another class- but we DID get to learn how to get out of grabs. Theoretically, I now know how to snatch myself out of someone's hands if they were to grab my arm with one or both hands. I should be able to break a simple choke hold on my neck. I should be able to not let someone snatch my hair. If someone bites me, I can perhaps get them to let go. Oh and we blocked kicks.

I say "should" and "perhaps" for all this because in a real situation there are a lot of factors affecting the scene such as size, space to work in, and frankly if I can remember all that in the instant I need it. If a kid bites me am I really going to remember to push my arm further into their mouth to create that odd pressure that is supposed to make them loosen their grip so I can then snatch my arm out- or am I just going to react and snatch loose and tear my skin off?

In any case, it was something new and different in what has become sort of a monotonous job.

We had yummy lunch before I was dropped off at work,a dn on the way home, we went to Home Depot. I haven't found any really good spots to get dirt from on my commute (ok, and I admit that most of the time I forgot to even look), so I wanted to buy potting soil for the poor adopted plant. My mom also gave me a really neat froggy container to move my plant into. When she visited, she informed me that I have a daisy-like flowery plant, she said "mum". Well, she showed me at the grocery store last Sunday during our Chopped shopping, and the leaves certainly did look like that. So I bought a small bag of dirt, and then a clay pot. I have been trying to preserve the hydroponic Basil we got from the store also, and it deserved a better home than the plastic Mum pail.

I painted my new clay pot. Green glazed ones were much more expensive (compared to regular pots), that I decided to paint it myself. I happen to have a whole box of Crayola paint and brushes too. It's washable kid's paint, but I have no idea if it will wash off the pot. I figure at least I had fun doing the painting.

So here you go, Stephie- the baby pictures! 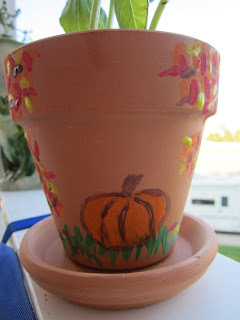 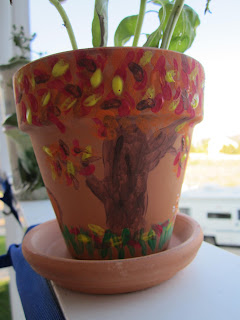 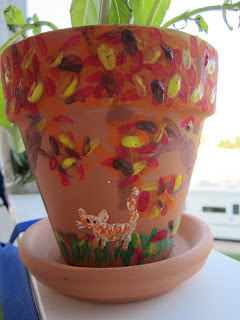 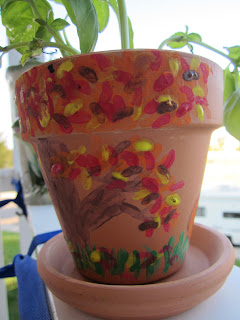 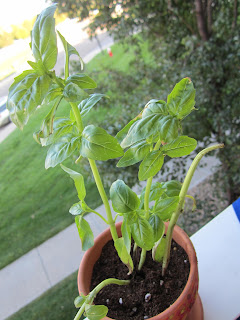 Poor wilted Basil.
Honestly I can't believe it survived this long on nothing but tap water. 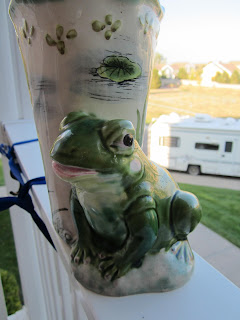 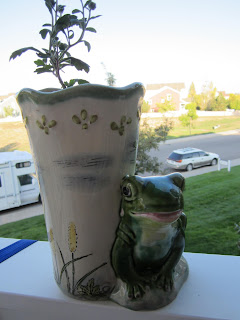 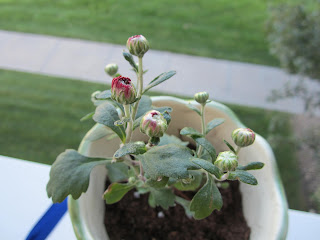 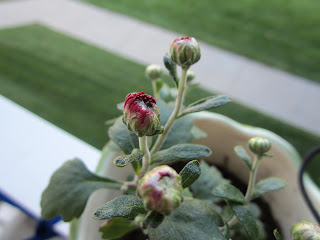 So, I must have done something right by these little guys, because one has survived with no dirt at all, and the other with barely any. With their pretty new pots I hope they will continue to do well. I'm hoping the Mum doesn't mind not having a drain hole, but it is a very tall vase-thing so I don't think it will.

I think that's everything. My panda bear in Warcraft is still a baby, but I'm enjoying it when I do play. Someone at work gave me the great idea when we were discussing crafts and beaded jewelry that I could likely sell beaded ornament covers very well, so I might try that soon. I'll have to get a small collection of beads. One of the kids on my bus really likes Disney princesses, and has several pictures of Snow White and a few dwarves. I may very well end up being Doc for Halloween. It sounds like a fun costume that should be fairly simple to create and not costly. The beard may be the hardest thing, and I can make that from yarn, perhaps without even cutting it, so it may be still usable. My mom got me striped tights! I can't wait to wear them in October, they are bright and fun. My new black shoes will look great with them.