I would be happier, except I'm an idiot, and bid on a double-run field trip for tomorrow. It has a 5:45 AM start time- oh joy. I can honestly say I won't be making that mistake again EVER. Being a double run means that I get up that early to take them to their destination, but then I don't get to sit around knitting and making money while I wait on them- I get to go back home unpaid. But, I'm not sure when they'll need to be picked up because there is a tournament- so if they lose, they'll go home early. I'll have to make sure they understand that there will be a 30-minute commute involved, not to mention driving time from base to their location.

My route itself is rather easy, and I'm very glad to have it, but I hope they figure out just exactly what I need to be doing every day soon. In the 5 days I've run it, I think we've done something different (or tried to) 4 days. The start time changes with the addition or subtraction of students, so my sleep hasn't been the greatest in the world, and it makes me grumpy. Our one boy that has been a constant, though, seems very nice. I love his teachers, who introduced themselves the first day and always look happy to see the boy and us. They gave us chocolate! Little silver Hershey nuggets wrapped in yellow printed slips to make them look just like little buses. They were in a little package that declared "We wheelie appreciate you!". With a greeting like that, what's not to love about my job- seriously? Any gripes above are strictly the sleep deprivation talking.

Taking winter break off (plus some, since I was a substitute with nothing to do) was a REALLY bad idea. I should have made a point to go pedal somewhere just to stay in shape. I'm exhausted, and not really looking forward to tomorrow morning's trip, even though somehow against my own estimation, I do eventually pedal those last few feet to the bike rack at work or the mailboxes outside the apartment. I'm not quite sure how it happens, because the whole way it feels like I'm never gonna make it. IN the dark morning hours, there is the added drag from my light system, and it the daylight there is the added drag from having studded tires. I don't grumble too much about the studs though- they save my bacon on the road by our apartment. That sucker is STILL covered in ice two weeks after the Christmas snowfall and one of those had all above-freezing temperatures with several days in the 50s. The tall houses keep that road in near-constant shadow. I'm grateful for my studs.

This afternoon, we had snow! It successfully distracted me from my aching legs. There will likely be snow tomorrow too. I got pictures. 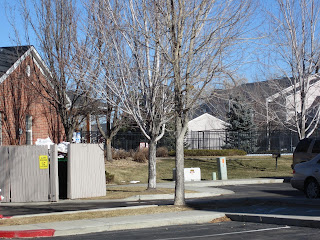 But first, I forgot about these pictures of a squirrel. He was foraging at this tree while I kept Jamie company at the garage as he worked on our roommate's car. 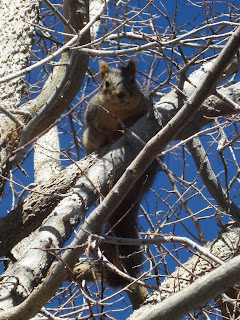 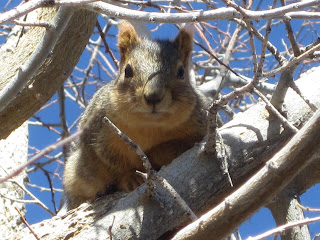 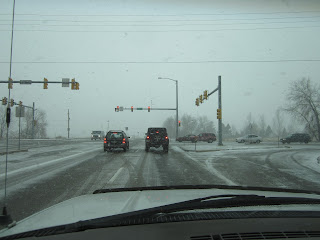 It got very slippery out there. I admit, I could feel the wheels slide a few times. So, I would be sure I could stop very early, and then just creep forward to close the distance. Obviously this hasty picture was snapped as we were creeping. I'm surprised it's straight! 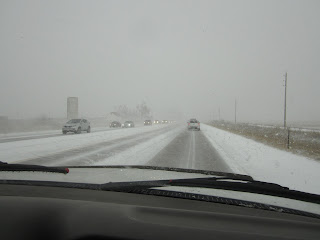 I just had to ask my assistant to snap this one. With visibility like this, I was not surprised as we passed a van on it's side across the ditch with several other vehicles of the flashing-light variety gathered around. Luckily, they weren't on our side causing onlooker delays, just cautious slowing. 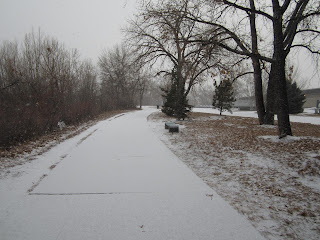 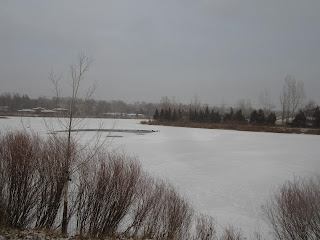 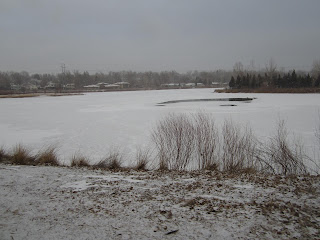 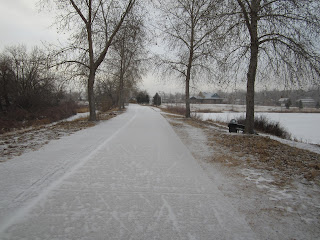 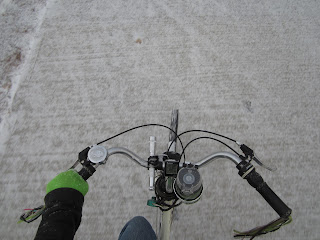 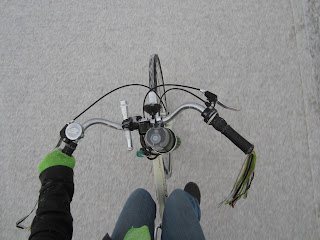 You know, it's very hard to take a picture with the camera above your head? I like the first one better, I think. 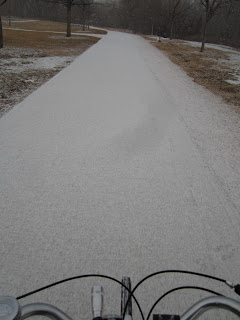 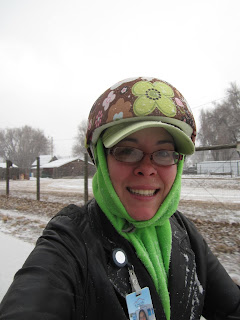 And this is me, hoping that my face is in a smile, because I can't really feel it.
Hey, look- it worked! 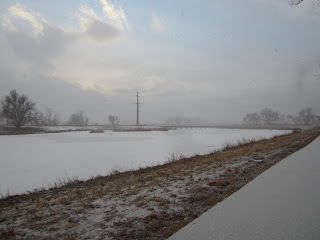 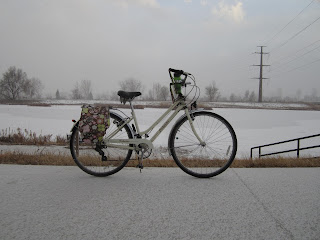 And of course, Zoomie in the snow. Over by the apartment it got deeper- about an inch at least.

You may have noticed that my cushion is gone, and the tool bag. While I'm not complaining too loudly about the drag of studded tires and occasionally lights and my stupid weak legs, I DID take off the extra weight of the cushion and a few unneeded heavy tools from the bag. It turns out the rest can roll up in the saddlebag perfectly.

I brought my cape to work, but decided against wearing it home. The snow didn't seem to stick very much, so my fleece was fine and my leather jacket wouldn't get soaked. There was also a slight wind. I had fought strong winds both home and then back to work in the middle of the day, and did I mention I was out of shape? I honestly didn't think I could handle any extra resistance at this point. I had seriously considered taking a bus home (I found out where the stop was and that it takes just as long as my winter bike ride does- 32 minutes according to Google. I just didn't figure out when the bus gets there. I even had the $2.25 fare in my pocket! Just in case.)

My scarf was originally just over my ears like I always wear it, but I quickly remembered that snow floats and hits your face, is cold, and kinda hurts. So, I pulled the scarf forward so my neck and chin were more protected. If the day was colder (30-28F on the way home), I might have redone the wrap completely to cover my face, but I wasn't that uncomfortable, my nose is very runny, and I'd rather not fight fogging glasses on top of that.

Rides usually are nice, especially after the fact. During, it can be difficult while you're forcing your legs to keep moving somehow and cursing the wind for blowing RIGHT AT YOU WTF! and wondering if taking the studs of the tires out would really be that bad and how much it might hurt if you fell because maybe that would be worth it... You think all that during the ride, but somewhere along the way you also notice that the weather really isn't all that bad, and that the pedals aren't exactly as hard to move around in circles as they seemed. Those studs make a sort of pleasant buzzing sound and you AREN'T slipping and sliding all over the place in this snow that's falling so prettily.

And then, against the wind that sprang up again (argh!) during the last stretch to home and uphill, you pass a Honda that had come by you earlier just to beat you to the stop sign, and with your heavy studded tires you BEAT IT up the hill and not only that, but you pull in to the mailboxes at home way ahead of it because it has no traction in the pretty snow. That's when you really love your bike, you love the weather, and you love your decision not to be lazy and ride a silly bus home.