I don't really expect anyone to exchange gifts for Christmas this year due to so many of us moving. Also, the family has gone more and more to the realistic notion of giving gifts to the children (which keep multiplying!) and the adults just enjoying each other's company. Still, a general wishlist is a good thing to have, I think. I didn't like Google's shopping wishlist because you have to actually find a specific item online, and the search function is very limiting. It couldn't find Schwan's Bagel Dogs, and that is a very easy product to find in general, but the shopping thing just showed me dog beds. Um, no. So I've created a Google document that I could link to. This is better since I can edit it.

I still feel foolish and selfish for posting this, but I was keeping this list in my phone, and since switching phones I'd have to retype the memo note. The list is for me too, to remember what things I'd like to have someday (or now, in the case of those food items. What can I say, I'm goofy).

If someone felt like peeking at my list, you can find the Wishlist link in my profile, listed at the top above the About Me section.
Or click here.
Posted by Red-Eyed Tree Froggy at 6:41 PM No comments:

I ate too much, of course. We had our turkey day feast with our friends and their relatives: 12 people in all, I think. We did most of the preparations ahead of time- Jamie baked sweet potatoes and had green bean casserole ready to bake. Tig made bread dough, there was a pecan pie made and ready to eat.

We ended up not going to Tig's parent's house because they came down with something, and I really missed them there. Instead, an uncle loaned his house while he went to visit others over in Medford. Everyone brought things they needed.

Tig made cinnamon rolls first. The bottoms of most burned, but they were demolished anyway, before the icing was even created. I think 4 actually got iced, but by then the vegetable tray was ready with ranch dip and crackers. Val made a baked turkey, which took forever. It is difficult for several people to cook and prepare things at once in one kitchen with one oven. Our 2pm planned dinner wasn't ready until 5pm. The sweet potatoes were staying warm on the stove burners while waiting for oven time, but half of them burned(the half with tons of walnuts, oh poo). Badly burned, so that the lady who owned the borrowed glass pan told us to throw it away. I think Jamie overruled that foolishness and chipped out the black for her. The turkey fryer also decided to act up by not working. Something must have been stuck in the valve, but eventually it was unplugged and allowed the fire to go full-blast so the turkey could hop in the oil jacuzzi. We finished most of the rest of the meal, and then people hurt themselves by adding the fried turkey on top. Then we hurt ourselves again with pie. One lady made a pumpkin pie completely from scratch. As in- she grew the pumpkin too. She told me how she made it and now I want to make one next year, the thing was absolutely delicious.


Why won't the fryer work? 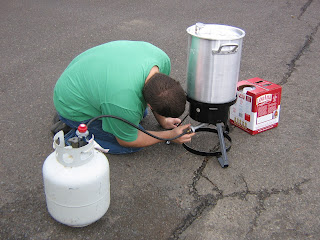 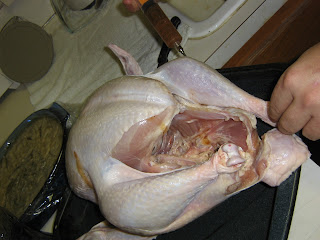 It won't hurt, 'cause you're dead, and you're certainly lucky you are,
'cause it's gonna be hot in my big silver pot...! Gosh I love deep-fried turkeys, don't you? (doo, doo, doo) 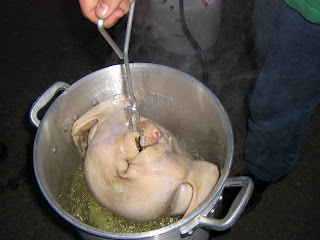 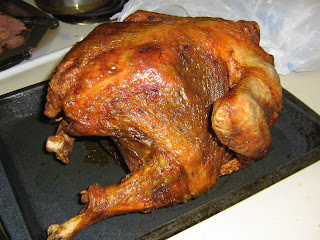 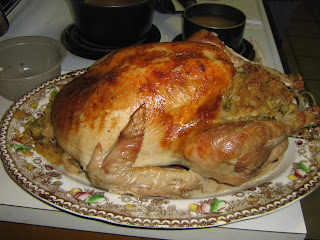 My beloved sweet potatoes! Those marshmallows are just like s'mores on top. This has to be my favorite part of Thanksgiving. 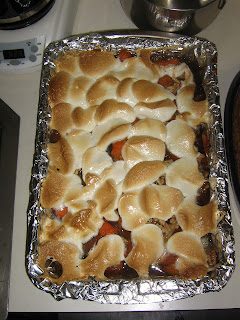 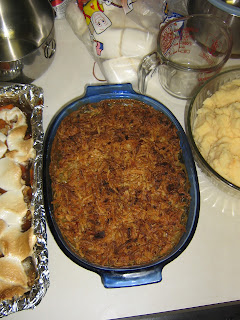 Our friends discovered a great deal on a Kinect at Walmart, so we braved pre-Black-Friday crowds to see if we could get one. The sales were supposed to happen at 10PM. We got there at 9:05 and they were sold out. Explain that one to me?
In any case, I will be taking advantage of the crazy sales also, to get zippers. I have a coupon for 25% off a total purchase at Jo-Ann's. This includes sale prices, and is the reason why I shop there. I can go and get something already discounted, and pay even less for it. So I should be able to get all the various zippers I need for Jamie's Scottejacket for a song. Yay.
I have the layout of all those pockets complete, and almost have all of them cut out into usable pattern pieces. I can't wait to start construction. This thing should be the most complicated garment I've ever made so far. If you can believe it, I've altered the design slightly to add EVEN MORE pockets. You'll see when I'm done. You know I won't be able to keep from bragging if the jacket is even half as cool as I hope it will be.
And now it's time to break out the jingle bells! Every year since becoming a school bus driver, I've worn big jingle bells on my shoes from Thanksgiving break to winter break. They called me Tinkerbell in Jacksonville for it. Jingle bells make me very happy, so now I get to finally wear them. I also have all those holiday earrings which were super-cheap after the holidays were over. Santas and penguins and more jingle bells!
I'll be back soon to tell you all about the bike ride that Jamie and I went on, and of course to share anything else interesting that happens.
My family is also moving from Florida to Colorado to be with my other sister. Drive safe you guys! <3
Posted by Red-Eyed Tree Froggy at 5:02 PM No comments: