Well, today is the first day I had to admit defeat and drive the car. Oh I probably could have suffered the commute by bike this morning, but that's just what it would have been: suffering.

I used The Weather Channel for my zip code, like I do all the time, and it called for rain most of the day today. Not surprising at all, but I did ride to work with a few stray sprinkles yesterday, and I know I'm not prepared for cold rain. Actually, Jamie was incredibly sweet and understanding yesterday. Instead of just reminding me that I have a car available to use or offering to drive me, he offered to strap the bike rack to the car and drive me and my (still nameless, people!) bike to work, so I could still ride home. My husband is really awesome. I remember thinking it a little odd that B would choose to tackle the bridge and ride his bike to work when we offered him rides. Now I get it. It's just plain fun. Maybe not always in a "whee, yahoo" sort of way, but riding my bike always makes me feel better, even if I had to fight up the bunny hill with a headwind.

So, the promise of rain sort of freaked me out. I have my nylon windbreaker, but was it waterproof? Where on earth is my big fluffy jacket that declares itself "all-weather?" I think it is currently under the camper mattress acting as padding, but oh well. T promptly solved my windbreaker worries in typical simple fashion- she happens to have waterproofing spray. Brilliant! Simply wash your garment, spray this stuff on and throw it in the dryer to set the spray (and of course dry). The spray is Granger's G-Line Waterproofing, and T had it for when she tried snowboarding once. My windbreaker this morning doesn't feel any different, but I felt better about the me vs. rain match-up.

I got up this morning, changed, put on a baseball hat (to keep glasses mostly free from falling water), stuffed my pink gloves down inside the rubber ones I've acquired from cleaning my bus, put an extra pair of pants, socks, and my water shoes into a garbage bag with my other stuff, and set off.

And promptly turned around.

I should have had a long sleeve layer under my windbreaker. I should have another layer of pants, or at least something to keep them dry. I should probably have shoe protection against the water, and definitely more/better socks. My hands were already cold and starting to hurt a little. Cold sprinkles hit my face. I was already later than I'd like to have been. So I decided this was stupid. Just because I had the spirit and wish to commute in the cold rain, and eventually snow, didn't mean I was actually ready and prepared to do so yet.

I drove, feeling very much too close to the ground because both my bicycle and a school bus sit higher, and resenting the heater which of course was barely warm in the 3 miles it took to get to work. Then I had to figure out where to park! If I wasn't generally unhappy about the whole thing, I'd have laughed. The temperature was only 37 F (only, as in- I know it will get much colder, and I've already ridden in this temperature, why is a little water such a drastic variation?).

...Winter is going to kick my butt.
Posted by Red-Eyed Tree Froggy at 8:53 AM No comments:

Currently the internet here is broken, so I’m writing this with the intent to transfer it to blogger at some later point. Oh well. If I hadn’t told you, you’d never know. Obviously, if you're reading this: fixed!
Today the weather seems to have gotten me. We’ve had gray skies all weekend, and today was no different. It is gray, and windy, and cold. I came home and Jamie was awake, so we took a blazing hot shower. Hot water and cuddles didn’t really help, though they were nice. I asked Jamie to make me breakfast. We had yummy egg sandwiches. I was still bleh, so I reheated my chai tea latte (latte means with milk, I guess). I’ll tell anyone who will listen that it’s my favorite drink- it smells and tastes like Christmas in a cup. But it didn’t help either. So I went out to the chilly trailer and finally put all the clean clothes away. I had been meaning to reorganize so I could reach things better instead of having to crawl over the bench seats to get dressed.
The wind on the way to work was strong and gusty. I felt like I fought the whole way. I was trying to hurry too, because it was after 2:30, when I normally like to leave the house. I passed all the kids getting out of school and waved at crossing guards, who delayed a crossing a few seconds so I could pedal past. One young boy on a little yellow BMX bike was going down the sidewalk and we were next to each other for a minute. He asked if I wanted to race. I laughed and said I’d love to, but I’d spent the last 3 miles fighting this wind and I was tired. That’s not quite true. Home to work is 2.9 miles according to Google and I wasn’t quite there. But I kept up with him a bit until he slowed for a friend. I arrived at work a teeny bit worried that I’d step off the bike and fall, my legs were so tired. (But I didn’t walk up the hill!) But by the time I reached the door to dismount, I was fine. My mood had been forcibly worked off, I think.
I’m happy to say I also now have an inside parking spot. I wheel my bike into the hallway and then through the door immediately left leading to the garage/shop. Then I sort of manhandle my bike behind that door with its front wheel skewed. It’s a tight fit, but completely out of the way, in a space were dripping won’t matter if it rains. No more sitting outside collecting lot dust, yay!
For the first time on my bike, my hands got cold (with my gloves, I mean). I was wearing my pink kid gloves. I wonder if, being solid color, they are somehow thinner than my multi-color striped gloves? The stripes did fine both to and from work this afternoon, which I don’t think was any warmer than the trip home this morning. I didn’t wear a hat, but the first trip in the dark this morning had my ears unhappy about it. I’ve also noticed my sneakers starting to show their age. My right shoe now has a small hole where the fabric is separating on the outside of the crease where the toe bends. My gorgeous white shoes from Uncle Jimmy are still pristine- I’m afraid to wear them and make them dirty…
Jamie just received his birthday presents today from his dad. My father in-law has an awesome sense of humor. Jamie’s gift arrived in this bag: 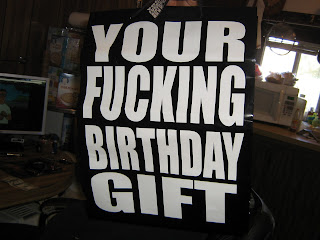 He got a T-shirt that said he loves animals, but he’d pound the hell out of a beaver. It’s hilarious, but I honestly don’t know if Jamie will ever wear it, hehe. However, I’m definitely inclined to wear mine on particularly bad days: People say I have a bad attitude…
Should have removed the sticker. Oh well. It’s one step worse than the black shirt I have with green letters that says “People say I have a bad attitude. Those people are stupid.” I love it.
And since I’m feeling better, I’ll share a picture from the end of last week. The clouds actually were gorgeous before they expanded to blot out the warm light with their gloomy grayness. The weatherguesser says we may see the sun on Friday. It seems so far away…! 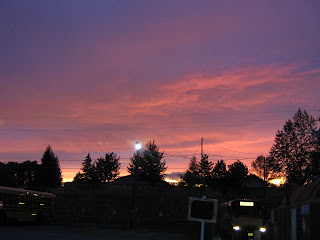 Also, Questionable Content  is awesome! Jamie made sure I saw this one, of course.

Posted by Red-Eyed Tree Froggy at 8:24 AM No comments: