Yesterday marks the first day all week that I've felt better since waking up with a fever Monday and calling out of work for both the morning and afternoon bus routes. It felt so much better that I actually got out the table and set everything up for some sewing. I would have taken pictures, but honestly I am fairly certain that even if I labeled things, you would not really make sense of things. I know this because I can barely make sense of things! I am beginning to need to piece together pieces because I am running out of fabric, but if I can pull it off, the Jamiejacket will be up there with my couch cover in complicated and great projects.

I have ridden my bike only a little bit this week too, which is mainly due to me not being able to breathe or move without feeling weak and achy. I rode in one morning, then ended up getting car rides home and back to work, then getting a car ride home again with the bike on the rack. Then another day I rode in, then the bike rode home in the bed of my coworker's truck. The one-way bike trips felt worse than not riding at all, like I failed something. I think I could have ridden some of those days, but then again I could easily have worn myself out and perhaps not have gone from very-ill to nearly fine. Now I still have a runny nose and cough, but I haven't needed medicine for it, only tissues and the occassional cough drop for a tickling throat. Yay.
Yesterday's ride was the first full day of biking, but it turned out oddly. I took the green bike to work, figuring that I should make sure it was up to a trip in normal safe weather before I try it out in the snow it is meant for. It is a good thing I did. The bike lights aren't ideal for it, and I'll borrow lights from my roommate's bike rather than swap mine around all the time. I'm worried the screws will strip the set nut out again- they've already been super-glued back in once. I also had to adjust handlebars and seat height more. But the thing really requiring attention now is the chain. It wasn't nearly as rusty as I've seen chains in Florida get, but it failed in spectacular fashion on the way home yesterday morning. 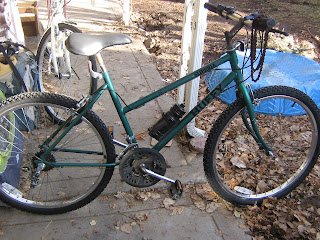 What's wrong with this picture?
Ironically, it occurred at the exact same stop sign that I tried to launch from when Foreman's axle came loose. I might need to decurse the area or something.
I tried to take off from the stop and right about in the middle of the road my pedals suddenly spun freely. ZING! I quickly got off (easier than getting off foreman!) and hobbled to the opposite sidewalk to not be in traffic, which was far off anyway. I had to pick up the dragging chain to do so because it tried to roll up and wedge itself in the bike and keep me from moving, so I knew exactly what had happened. I started walking. On downhill parts I would straddle the bike and sort of scooter along, but that is harder than it looks to keep doing. Not having resistance on the pedals is a bit unnerving, but was very handy for when I'd accidentally bump my leg with one- it didn't hurt! 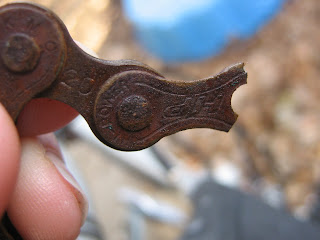 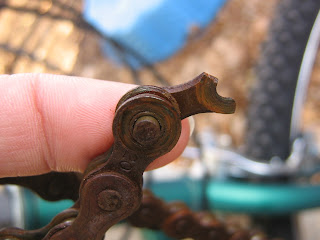 It broke.
So Zoomie was very happy to resume duty as my valiant and trusty steed. Her chain mysteriously stopped squeaking entirely and the shifting has been awesome. Even the brakes don't drag as much as they used to, though repeated wrecking has the cable a bit looser than I'd like. Both adjusting barrels into the brake levers are now wedged at odd angles from being whacked on pavement. Today's ride was uneventful, and highly enjoyable as even the weather was better than usual at near 50F.
Jamie has been busy all week first taking care of me, and second with his new video game. On Monday he dragged me out of the house and to Fred Meyers (a store like Walmart). I leaned on a cart like a little old lady the entire time as we looked at things leisurely. We got me Theraflu in a fantastically horrible sickly-sweetened orange flavor that I will be happy never to have to choke down again. I grudgingly admit that it probably is what helped my fever break at the end of that day instead of several days later, but very grudgingly. It was truly horrific. Jamie bought me a chai tea which I sipped as we walked very slowly at my invalid pace though the store. He also ended up buying me a lovely bright red shirt which I wore for Valentine's Day, a purple shirt that I wore for my birthday, and a black and red-checker dress which seems like it would wonderful for hot summer days. I imagined picnics while trying it on.
I felt well enough to put my hair half-up with a heart and red ribbon on Tuesday, but that feeling didn't even last all morning. It's a good thing the heart fit under my helmet, because I couldn't have done it twice due to feeling awful (which is beside the point anyway since that is the day the bike got carted home on the trunk rack). We ended up watching movies and going to bed early with cuddles, which suited me fine. Jamie spent the first movie playing his new game Twisted Metal. It is really fun to watch because it is a bumper car destruction derby with rockets and all sorts of weaponized mayhem going on. It's like a first-person-shooting game with super-fast vehicles.
On my birthday I received a House T-shirt from Jamie and a giftcard to JoAnn Fabrics from our roommates. Jamie made cupcakes for me- chocolate ones with a raspberry jam-flavored whipped cream topping. He also made a small cake with the leftover batter, but I literally only wanted one cupcake, so there are a few of them left over and the cake sits in the fridge with them waiting for someone else to eat them.
That brings us to yesterday and the sewing. Jamie beat the game's story line at 4am I think. He's gotten used to the controls enough now that it isn't quite so confusing for me to keep track of the action because he can control his vehicle better (and therefore the camera) so it's more fun to watch. He can usually win the death matches in first place, and I like hearing the other players' reactions in voice chat- they get downright mad and I find it hilarious.
So, things seem to be smoothing out back to normal. I plan to try and work on sewing a lot to get the jacket finished while I feel so grateful to be feeling healthy and able to. The green bike needs a chain, which might mean that I end up adding a bike chain tool to my tiny tool arsenal. I believe both items are inexpensive, just a little more than an inner tube. At some point I'll make a recycling run. I figured out how to make the seat-back lay flat and now the trailer is almost full! 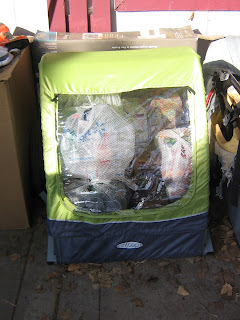 Neatly bagged cans fit better with no angled seat back splitting the cargo space :)
For now though, I plan to enjoy the three-day weekend. I'll begin with going to bed early as soon as this post publishes, and sleeping in to some obscenely late hour tomorrow. At some point I'll be a mechanic-helper as Jamie fixes the black car. It needs front-end work before it can get an alignment, and of course the brakes will get the attention they badly need. My mom has promised some sort of package that I'm really curious about. It makes me happy to know I have mail coming!
How will you spend the holiday?
Posted by Red-Eyed Tree Froggy at 10:21 PM No comments: