(as indicated by the title, there's a lot in this post)

This week is supposed to be my winter break, but as I mentioned before, I was asked to continue working to bring three boys back and forth to their school for other services. One of my new best friends is also driving for that school, but she has enough kids to need an actual baby bus and drives a longer route to drop them all off.

For some reason, I feel like I've been really busy. I get up at the same time in the morning, but then the kids need to be picked up at one o'clock, instead of the usual three o'clock for my high school. Then I get home earlier, but I think my body is programmed to be sleepy a certain amount of time after I get there. I've been ready to drop at an obscenely early six o'clock or so. Weird, and not really a good thing.


I've also been occupied with a few artsy endeavors. Over the weekend I decided that I was sick of not doing anything with my lovely bright green yarn. I bought the yarn for $5.60 from this really neat little yarn shop at the end of Summers Lane where both the bus shop and the high school I service are located. It's called Come Yarn Over (personally I think they could use some webpage help). I've met two wonderful ladies there, one who actually makes yarn, and the other I think is the owner. Oh gosh, for the life of me I cannot remember either of their names! I thought I had them memorized by now... bad me.

Anyway, the owner lady offered to teach me to knit if I wanted to buy some yarn. She normally charges only a little bit more for a formal class, so I thought it was a great deal. I chose green yarn (of course!). She sat down with me and taught me to cast on, knit, purl, and identify twisted stitches. She seemed very impressed that I caught on quickly, and the spinning lady told me she was jealous because I knit continental style. In any case, I left very happy with a bundle of yarn and two needles sticking out from the center.

My ears were starting to get cold at that point from the chilly fall weather, so for my first practice project I knit half of some helmet earwarmers. 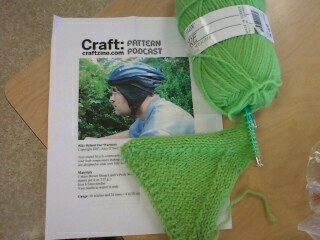 As you can see on this one, I accidentally figured out how to do twisted knitting, which is why the part on the left looks funky. Actually, I like the effect. However, I quickly got bored with that project for a few reasons. I have to sew the two halves together and then would still have to knit two more triangles to make a strap sandwich for my other ear. Also, I wasn't sure these would solve my cold ear issue, as my new Kryptonics helmet seems like the straps are held further away from my face- there would still be a gap for wind to get in. So I abandoned knitting for a while...
I have another project in the sewing department which has been a few months in the making. Or planning, rather- I haven't even begun actual construction yet! The project is an adaptation of a special vest that one of our friends owns, a Scottevest. The thing has maybe a billion pockets (slight exaggeration) and Jamie would like a jacket version with sleeves. Not having a pattern to use, I needed to make my own. I borrowed his vest and sort of drew a diagram with most of the important aspects of it noted. Our friend is also considerably smaller, so I've had to take those sketches and draw them on this pattern in order to enlarge it. Considering the complexity of this garment, it's not easy! This has to be the most complicated project I've attempted. Even the couch slipcover was easy compared to the mind-boggle of how everything needs to fit together on this jacket. Sometimes I get in a groove and things just click, and then others it's like I'm trying to do math homework with fatigue clouding my mind, making everything into a gigantic impossible puzzle. However, slowly I'm figuring things out. Now I am at the point where I am taping computer paper together to form a layered paper version- to make sure everything seems right as well as to give me pattern pieces. Oi...

It's no wonder with that colossal task that I wanted something else easy to do for a while, and that green yarn kept catching my eye. I found a few videos on Youtube that made averything seem so simple, I decided to jump in to make my first sock, which is the entire reason I wanted to learn to knit in the first place. This playlist is what I followed. 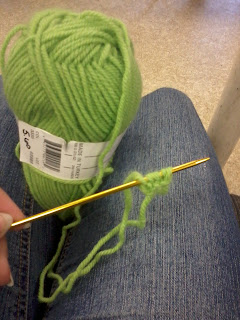 Gone circular with some round of ribbing done. 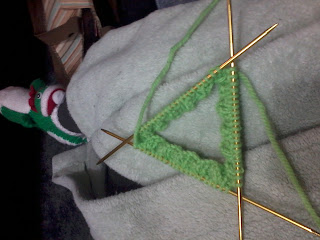 Yes, I know it's actually a triangle. They call it circular, or knitting in the round because I just knit around and around, instead of making flat fabric with edges that have to then be sewn together. 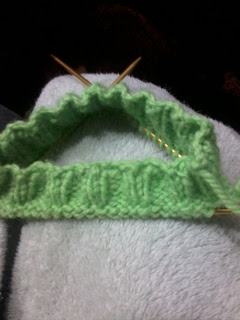 Ribbed cuff done, and working on the leg of the sock. 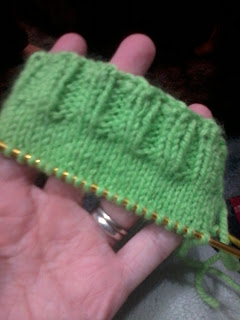 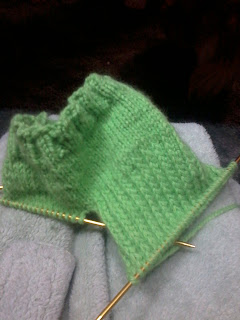 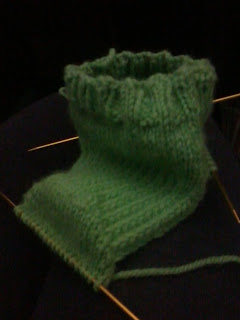 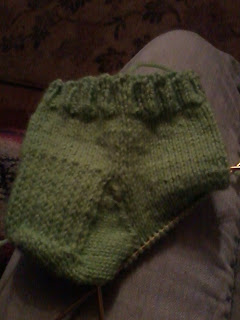 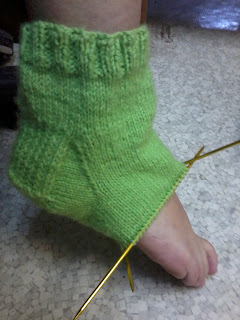 My sock is too large, obviously. The lady in the video was using worsted weight yarn (I think of it as regular yarn, it's like mine) and cast on 32 stitches. I thought that was just to knit a small sock for teaching purposes, and she had mentioned that most people would have 64 stitches. I also knitted a pseudo gauge swatch (usually a 4inch by 4 inch square used to see how many stitches you can expect to get per inch and how many rows on the size needles you use- I only knit a two inch section and several rows) and came up with 6 stitches per inch. Somewhere along the way I measured my leg and thought 10 inches around would be good, so 64 stitches seemed perfectly reasonable to me at the time.
So I'm making a cozy slipper sock. Whatever. It's just for practice anyway, and I may or may not get more yarn to do a second matching one. I played around with enough of my yarn before this sock that I doubt I have enough here to make a pair. Now, I have gotten down to where I can start toe decreases, but I lost a stitch and have no idea how to fix it. I unraveled a bunch of rows, thinking I would just pick everything up and keep going, but then I lost one of those stitches and decided to give up for the time being and go to bed before I stabbed something in frustration.
Lastly, I have finally had my first casualty from riding my bike through the winter. There was a thin coating of little pellet-looking snow, a dusting really. I had no trouble going to work, but on the way home maybe I was going too fast, or the cars had gotten that area more melted by going over it.
I tried to turn a corner to the right and quickly realized that my bike was slipping sideways to the left out from under me. I clearly heard myself let out a comical-sounding "oooh!". I put out my right leg to try and catch myself, which was a useless gesture because I was also still moving forward. I can't remember if I tried to brake or not. I ended up sort of sprawling out beside the curb as Zoomie and I both continued falling anyway. I hit my right knee and the bike sort of tangled with me on my left ( I think it sort of ran me over). I scurried up while making sure my knee was only merely banged (I didn't even rip my favorite jeans, yay!), picked up my water bottle, hanky, and purse, straightened my handlebars, and got back on to continue pedaling home.
I wasn't embarrassed at all, only sort of kicking myself mentally for not being more careful, and glad that I hadn't hurt my bike more than a crooked handlebar. I could have smashed the derailleur or something. I did have to put the bungee back in it's proper place holding up my tail light. I guess the crate shifting messed it up, the bungee keeps my light in the right spot under the crate. 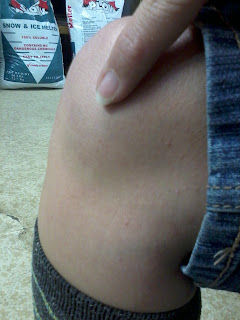 You had hardly even see the discoloration that I'm not even going to call a "bruise".
Thank goodness today is Thursday and tomorrow is considered a holiday. I'm going to sleep in.
If you have been super busy lately with work, shopping or other activities, feel free to leave a comment and share!
Posted by Red-Eyed Tree Froggy at 4:18 PM 1 comment: