As promised, last weekend I got to play mechanic with Jamie. Our car needed some tender loving care and a few good whacks with a hammer.

First: some backstory. We moved out to Oregon from Florida back in June with our two dogs and two cars plus whatever would fit inside them.
We started out by towing the Camaro (1980) on a trailer behind the black car (1995 Caprice 9C1 decommissioned highway patrol car). We made it only as far as Jacksonville before the trailer threw off a wheel. Yes, the entire wheel. They were these strange circular deals with a wedge system instead of normal lug studs. At the time we got the trailer I thought they were really cool. At 4 am searching for the wheel in the dark on the side of a highway, I was not so enthusiastic. To make matters worse, the powerful aluminum jack we had did not have the superpowers required to lift a fully-loaded Camaro and trailer with other stuff loaded in various places in order to get the wheel back onto the trailer once we found it. That meant we had to get the Camaro off of the trailer. The Camaro's battery decided to become junk. We pushed the Camaro off the trailer and detached the trailer so that I could then drive the black car to Walmart (we had lived in this area only a short time ago) to get a new battery. The reason we couldn't just jump off the Camaro was because it didn't have anything at all to clamp cables onto, so I got some cheap posts and things too. We managed to get everything fixed, but we'd had it with the trailer at this point- it was clear that we needed another set-up.
So, my parents came to Jacksonville, which isn't really that far of a drive. Jamie gave the trailer to my dad, and my parents took some other things which we decided really weren't necessary. Jamie and I drove both cars to my twin in South Carolina. We spent a wonderful day with her and installed a tow bar under the Camaro, and the black car towed the Camaro the rest of the way. Even down a super-scary twisty road with mountain on one side and the Cliff of Doom on the other. The black car pretty much burned out its brakes keeping us from dying, and for that, I am of course eternally grateful as well as incredibly impressed. I love the black car like never before. 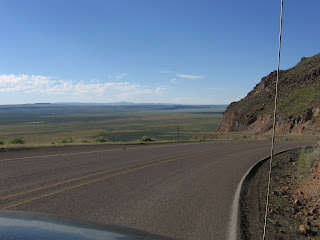 That brings us to the recent past. The brakes on the black car failed enough so that I was no longer able to drive it. The brake pedal would go down towards the floor quite a bit before you'd actually have any braking action and my legs are not long enough. We replaced a rear brake rotor (is it still called a rotor if you are using the FINS to stop the car with?) and pads on the left side, the right side needed a new caliper before the same could be done on that side because we discovered a leak. Car parts are expensive even if you aren't paying someone for labor, so the black car was driven very sparingly by Jamie for a few months.
Jamie received extra financial aid from school, and we were finally able to finish all that needed doing to get the black car back in proper shape. It needed new tires and an alignment. Jamie likes to tell people we needed new tires because the air was hanging out of ours.
Basin Tire Service wasn't willing to do an alignment. They were really nice and knowledgeable, the guy showed Jamie exactly which parts of the steering were broken, and even the paint line which proved that the alignment we paid for in Florida before we left had never been done. So, we replaced inner and outer tie rods and their adjusting sleeves on both sides of the car, the center linkage, and one idler arm. This is in addition to the leaking rear brake cylinder and brake pads, both front rotors (they were already too skinny to be machined) and pads that we had planned on. We have discovered a new auto parts store which is now our favorite- O'Reilley Auto Parts. They helped us more than words can convey. We spent Saturday on the front of the car, Sunday on the rear, and finally Monday the alignment was completed. We celebrated with a car wash and a movie.
Without further ado, pictures! 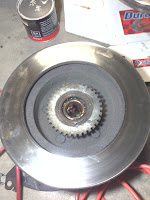 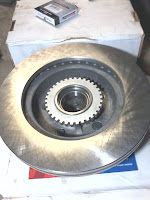 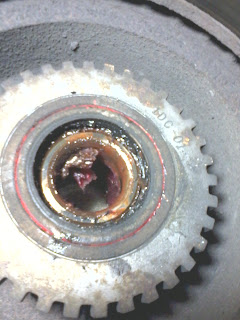 You might notice the new one doesn't have a center bearing... 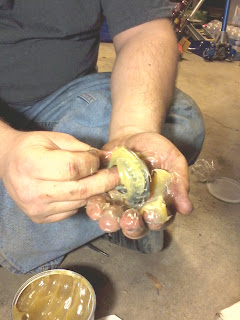 Hand-packing grease into a bearing. Ewwwwww.
Grandad, yes it is better to hand-pack them. The one that had been greased with the gun rattled when we pulled it out. 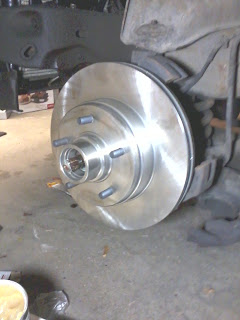 Yay shiny!
((For those who are not mechanically inclined at all and have had no idea what I was talking about- cars can have drum brakes where pushing your brake pedal makes pieces squeeze outward into the walls of the drum to slow you down, or disc brakes that are like on a bicycle (major simplification). With disc brakes you press on the brake pedal and two brake pads sometimes called shoes squeeze both sides of the disc, or rotor. In the last picture above, the pads would go between those two brackets on the top right of the circle sandwiching the flat part of the rotor. Of course the wheel goes on over all that and the lug nuts hold it to the studs poking out.
The pieces of steering I mentioned before are all the bars that connect one wheel to the other so that both of them go the same direction and you can steer the car. An alignment is sort of a fine-tuning of how those pieces all fit together. You don't want your tires angled funny or leaning because then your tires will become worn very early in one spot instead of nice and evenly over a long time. Also, not having tires evenly on the ground means that you aren't fully on the road, affecting acceleration, turning, braking, everything. It's pretty important.)) 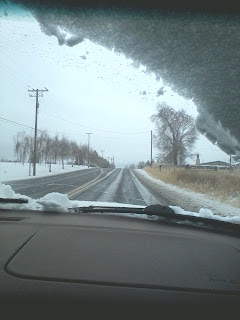 Some snow just in time to test the new tires. 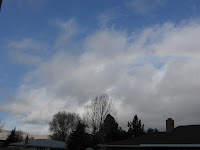 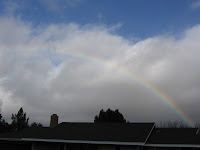