It's been a while!

Let's see, oh wow it's been an entire month. Since the last post my cold sore has healed up, and we've moved! We had to be out of our old apartment by the end of the day on July 8th, which was a Monday, and that meant Jamie and I were loading almost everything up by ourselves.

Oh god, I was sore. Not only was I an idiot by packing up my good (read cushy!) white sneakers, but all the standing, bending over, and carrying heavy things meant my sciatic nerve was acting up big time. It was difficult to comfortably stand, much less sit or relax during break time.

P90X is easy compared to moving!!

The stairs meant that my legs were getting a LOT of sudden heavy-duty exercise. Up, down, up, down, and all with way more than my normal body weight. After the first day I was sore. The second day, I had to get help to stand up from bed in the morning- my calves were so tight that it hurt to put weight on my feet with them flat on the floor. Luckily, they loosen up pretty quickly- it's kind of an important function to be able to walk!

I also found out the second day that it takes a lot of muscle to simply hold things without dropping them- my forearms filed their complaints too. And my right hip went completely on strike- I guess I was using it to brace things, and that very quickly had to stop- it hurt like a bad bruise but never turned colors. I got regular bruises in odd places- the biggest being two matching ones at slightly different heights on the front of my thighs. I told Jamie it looks like I was in a domestic dispute- which I was, but with my furniture!

My feet hurt most of all, though (next to that stupid nerve, which I can't do anything about). I was wearing my canvas flats without socks. The socks would have made things worse- that toe seam is always in the wrong place. As it was, achy feet wasn't so bad- when you take weight off them they stop complaining, but while you're standing all you want to do is make it stop. When we got to the new apartment I actually went barefoot- which was a big improvement, oddly. Maybe because my toes could spread out more?

The few steps leading upstairs to our landing are a rough pebbly texture, which can be shocking, but going barefoot is my new favorite thing to do. The carpet here is soft and wonderful, the sidewalks and pavement don't seem to heat up too much because there are lots of trees, and they also have the best thin-bladed soft grass ever. I walk barefoot as much as possible right now, because it feels awesome.

I had intentions of taking pictures of things during the moving process, and I completely and utterly failed, due to above mentioned physical issues. It doesn't sound like much, but I was SO happy to have Jon home to help with unloading, so not only did I have to make less trips, but I could carry mostly lighter things, and the boys could team up for heavy stuff to make it easier for them, too.

Here is what I did manage to get. 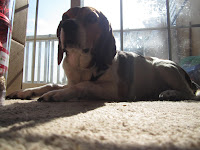 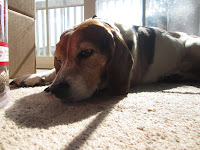 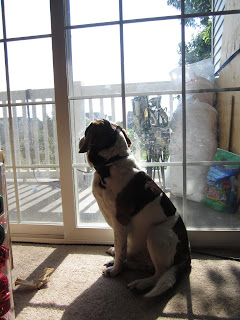 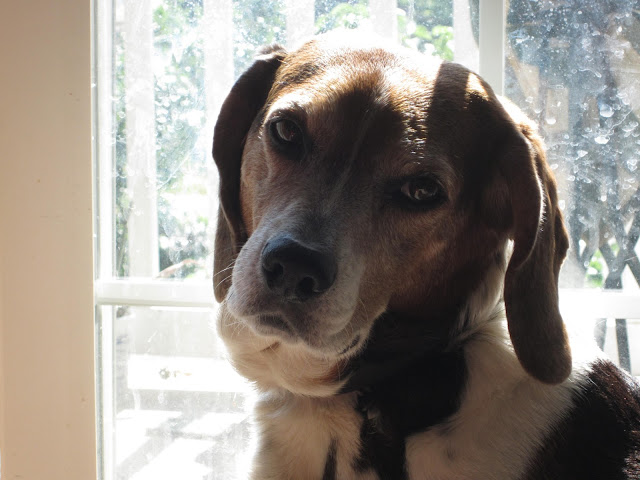 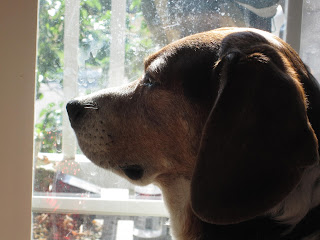 Grunt was ok with packing, and even with the first half of carrying things out. After that he started freaking. He was extremely happy every time we came back upstairs, greeting us with frog toy in mouth, and he REALLY wanted to follow us out the door. He listened extremely well, though, and never once tried to bolt out after us.

Once at the new apartment, he was completely happy. Probably because he could plainly see that stuff was coming in this time, not going out. He was so good at staying in the house even with the door wide open, that we allowed him onto the hallway landing. It's kind of like our very own private front porch area- ours is the only door there. So he liked being able to step out and see us clearly. 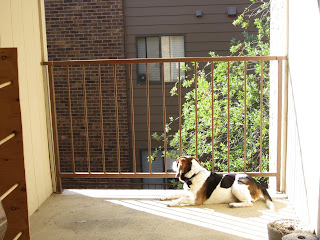 I'm probably standing right outside our door. The stairs are behind me against the left wall. 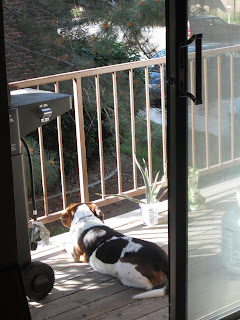 Tiny little porch that Grunt loves. An air conditioner unit takes up a lot of space.

So, we unloaded the truck first, then the boys went back to get the disabled Caprice and the Camaro. Along the way, the key must not have been turned all the way in the Caprice, so the steering locked as it was being towed. I hopped in Sagra, picked up Jamie where he had stopped at the airport, and took him to the moving truck. He fixed the Caprice, and we went back to the Camaro. It's been sitting undriven for a long time and had a dead battery.

A quick search using his phone, and Jamie found out how to access Sagra's battery from newbeetle.org, the forums that I'm a member of! I was very happy he could find what he needed so quickly- Beetle owners seem to be some of the nicest people out there- like Schwinn people. 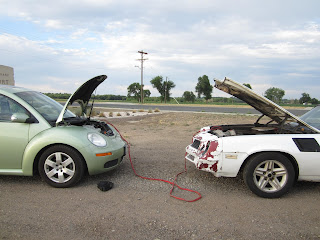 Does this mean we're best friends for life?
<3

The next day, it was time to get Zoomie. It might have been neat to just ride from one place to the other, but there was just no way that was physically possible at that point. So, Grunt and I took Jamie to work, and then we spent time leisurely loading up some bikes and taking them home. No rush, no fuss. 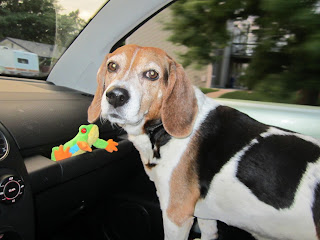 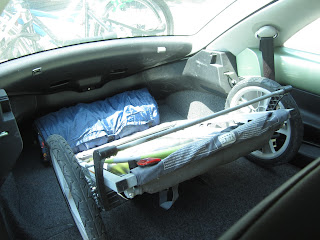 That folding seat sure is super handy. Behold the bike trailer. 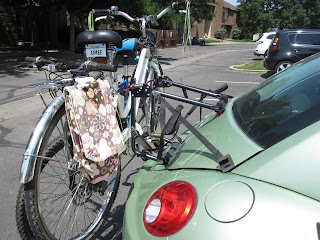 I do NOT recommend hooking the straps up this way. Those top strap brackets were not originally wedged in the corner like that- they sort of migrated there. Also, there is a LOT of weight squashing the foam on the lower brace- I think I'll add more squishies for next time. Overall, though, this rack works fine on Sagra- the bikes weren't too low, no tires were near exhaust. Bumps were interesting (I took them VERY slowly), but again, different strap placement would prevent bouncing. 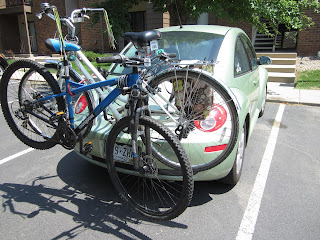 Now that we're actually moved in, I've got a project to do, which has taken up almost all of my time- I'm consolidating card collections and putting them in proper order. Jamie and Jon both play Magic: The Gathering. Jamie has decided to give all of his cards (some of which used to be my cards :D) to Jon, since Jon is the person he plays with anyway.

Did I mention that Jon's collection is MASSIVE?? He has also ended up with his dad's and brother's collection, and most of those haven't really been touched in a long while. There are bins full of binders full of cards, and then more cards in boxes after all that. 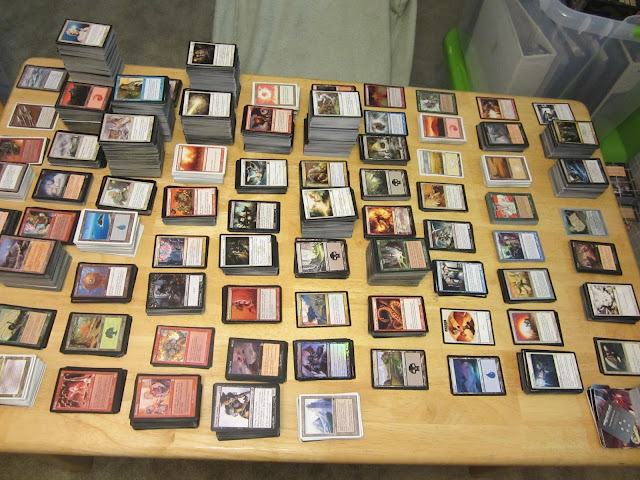 There is no dining room table. There is only Magic.

Those above are in the process of being sorted by edition, or set. Each stack is a different edition symbol. Some editions have so many extra cards that there are several extra stacks carefully rubber-banded (to prevent, /gasp, toppling) and sitting off to one side in a chair.

As of right this second, I have finally finished going through all the random boxes, nooks, and crannies, and each edition if now fully separated. Now, I get to further sort each edition. They get sorted into colors (colorless, then white blue black red and green) then multicolor with dual mana cost first and either/or mana cost second, then artifacts, then non-basic lands, then basic lands( plains islands swamps mountains forests), and finally any tokens or odd cards, and special printings like pre-release versions of cards. This part is slower going, but very methodical. I've cheated and written out the alphabet on a large newsprint paper from a sketch pad Jamie brought home from work. After millions of repetitions, it gets tedious for a brain to remember the proper order of letters! LMNO,  HIJK  RSTUV... Much easier this way.

Without work, it's suddenly very hard for me to consistently recall the day of the week. I've been meaning to go back to bike night, as well as finish earning a tandem bicycle by volunteering at the bike valet for the farmer's market, but so far I have failed. I need to set an alarm. I definitely need to get out of the house, though. Especially now that I'm doing nothing but sorting cards (which I AM getting paid for, but still)- I'm starting to go stir-crazy! Next week, it's happening. I mean it. There's bike night, plus the Dairy Queen "tour" has been rescheduled for Thursday, and then Saturday morning- bike valet. Must set an alarm...


And lastly, so that you're all up to date as of right this minute-

there is a giant moth outside our door! 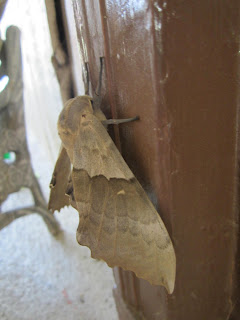 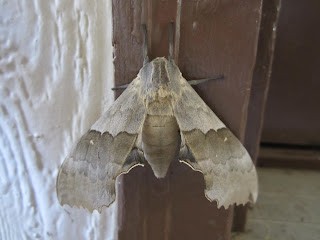 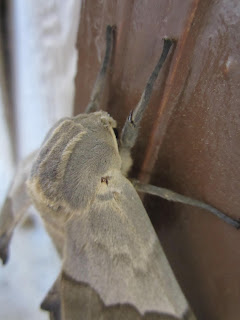 It's so fluffy I'm gonna die!
(quote from Despicable Me) 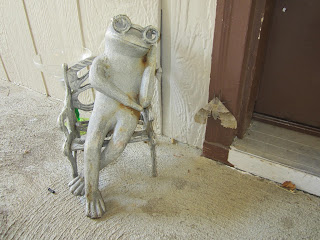 A not-so-quick google search seems to think this is a female Modest Sphinx, or Poplar Sphinx. Boy moths have butts that curve at the end, instead of smooth like a candle-shaped light bulb. It's so fuzzy, I really want to pet it, but I have not. Oh well.

There you go! That's all- one whole month, and not a whole lot has been happening.
Until next time!
Posted by Red-Eyed Tree Froggy at 10:02 PM No comments: