We've been up to Fun!

This summer has been off to a great start! First, our vacation, and now, Grunt and I are up to bikey fun. Bike Night is the main event, of course. Last week the theme was Reggae. A Google search with that word shows a lot of images with red yellow and green. So I wore a green shirt and a yellow sweater over it, and a red bandanna. All i really knew about Reggae is that it's got something to do with Jamaica, so i also braided my hair all crazy, since you will never see me in dreadlocks. 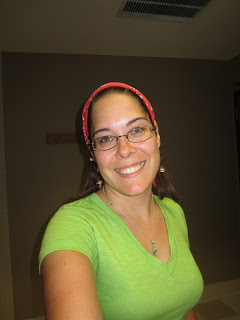 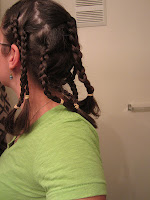 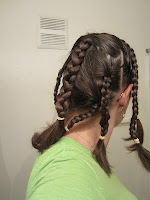 I found out on that ride that I really don't care for Reggae music. I didn't realize it was so... slow. Kind of boring to me. Jamie tells me I like it in a modified version called inventively enough: alternative Reggae. Oh well. 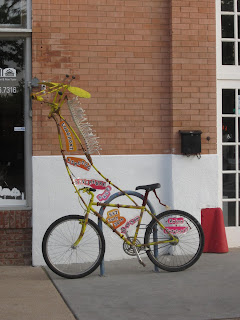 Look we passed on the bike ride! 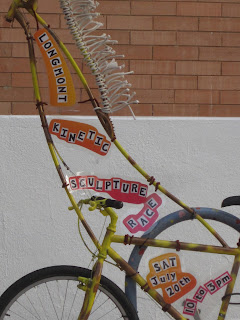 I definitely want to go to a race, especially if there are more crazy awesome bikes like this one! 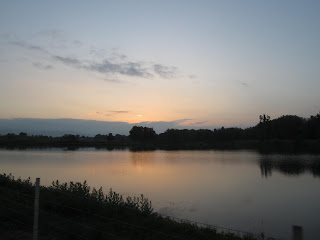 Then, I had a field trip! I took a summer camp class to Hover Park. They went crawdad fishing in the creek. I had brought a book, and I spent the entire day happily reading in the sunshine, stretched out in the grass with my new sunglasses on. After I warmed up, I took advantage of their great big gallon of sunscreen. I've never seen it in an amount that large! The pump nozzle on top was very convenient.

At one point, I sat there untangling three of their fishing poles. They were made of dowel rods with yarn tied to the end, and a paper clip for a hook. Their bait was chunks of hot dog. I heard the kids name one of the crawdads King Craw, because it was enormous. I don't know if they ever did catch that one, but they sure tried.

The best part was a snack planned for the end of the day. The teachers declared the area around the grill off limits, and they baked bananas in tin foil, after slicing them down the middle and shoving some chocolate chips and mini marshmallows into them. They gave me one too!
She called them Banana Boats. 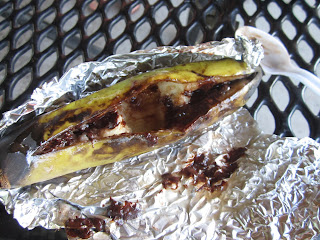 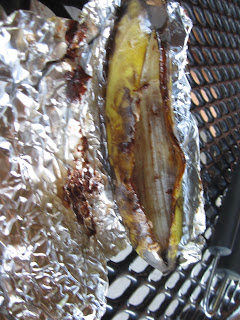 And this is what they look like after you've scooped out the soft yummy insides. Little banana canoes! The only thing that would have made that day more perfect is if I'd had a blanket to lay on.

I still wanted to bring Grunt to Bike Night, but he wasn't really ready yet. He showed that he was willing to run next to the bike, and I wanted to test him out on a real ride. I decided we should go to a park really close to home- only 1.3 miles away. It would be a nice short trip to start out with, and there was a creek that Grunt could drink from and stand in.

He did great! After a bit, he howled less, but he did that for quite a while. My favorite part was when we went through the underpass tunnel- he broke out howling again and it was incredibly loud and echoed awesomely. 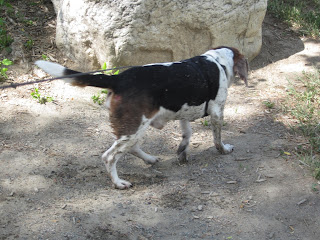 At the park. Yay for a wet butt to stay cool. I found out Grunt isn't a fan of swimming. He avoided deeper water even though he could see me standing in it. There really wasn't a great place to go in and out of the creek- it was rather steep. Next time, we'll go to the waterfall, where there is a nice big shallow part before the falls.

He was tired on the way back.
Grunt ran a full mile back home. When I stopped to offer him water, he sat down. I had him jump in the trailer. When we took off, he howled objections like always, but then he got quiet and seemed to enjoy the rest of the way home. Success! I thought.

I substituted last-minute for another field trip. We went to a mini carnival in one of the fairgrounds buildings. I decided to take myself out of the rotation for tip assignments. I highly enjoy them, but as soon as I've been assigned a trip, it hangs over me in an odd way. I worry about what day it is because I don't want to miss it.

Tonight, Grunt and I went to Bike Night!
With that first ride having gone so awesomely, I sort of had expectations of similar behavior for this trip. Grunt ran so happily to get there. He ran constantly for 3 whole miles. Then we got to a road that had the tiniest of sidewalks- not enough room for the trailer, much less enough room for him to run beside me too. I had him get in, and I successfully pedaled us BOTH up the hill. Hooray!

Grunt spent most of the ride howling. We tried to start out with him trotting alongside, but it was pretty clear that he was tired. Turns, out, he wasn't tired enough to stay quiet. I was embarrassed, but it was also fun. I mean, he didn't sound like he hated life, he's just a Beagle, and Beagles howl. It's what they do. We stayed at the back of the bike parade, and everyone kept saying it was "awesome". I gave up trying to tell him to be quiet. It felt stupid when the moment later, someone might be "talking" to him anyway. As far as I can tell, no one minded his near-constant happy howly noises.

Grunt rolled in the grass during the park pause, and then again quite joyously at the end. He was ready to run some more on the way home. He made it a mile before Jamie called, off of work. He was on his way home and wondered if we'd beat him there. The answer was no, but Grunt had been slowing down noticeably. I had him hop in the trailer again and we zoomed down the hill. He'd run another mile. He howled some more, but then sort of lapsed into silence with periodic outbursts of one or two howls.  One of those outbursts actually startled me, and I had to laugh at him.

I think Grunt's favorite part of tonight's trip, other than getting to roll in the grass, was the sausage at the end.

I can't wait to see what other kinds of fun things happen this summer!

Posted by Red-Eyed Tree Froggy at 9:38 PM No comments: