This week our normal potluck dinner plans were altered to become a pancake breakfast up in the mountains. We had been waiting for a Saturday that Jamie didn't have to work, and luckily I didn't have to wait too long. We ended up driving over to our roommate's grandfather's house, and then riding in his truck to the campground at Brainard lake. The rest of their family was in a second truck. There were lots of cyclists out because of a race. I have to admit that even I got irked at some of them for riding several-abreast and over the white line when a perfectly good shoulder was available. But, we finally made it up there. I think the view- as well as the food- was worth it. 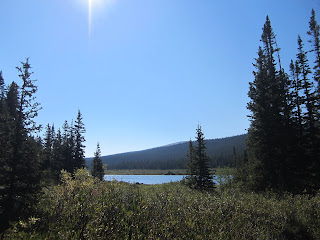 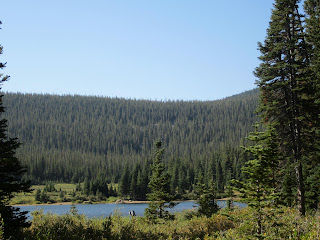 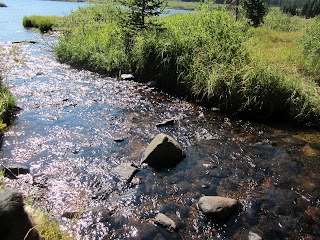 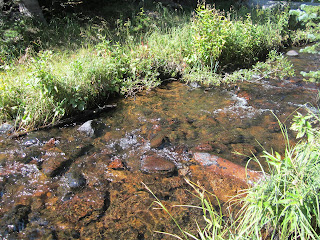 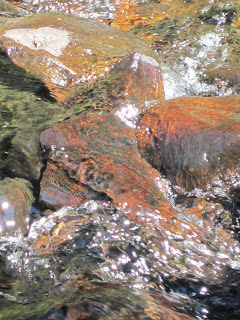 Doesn't that water just look delicious? I didn't drink any, but that's not to say I wouldn't have. 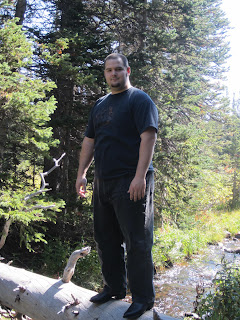 Look at those boots! We discovered they suck for hiking, but oh well. 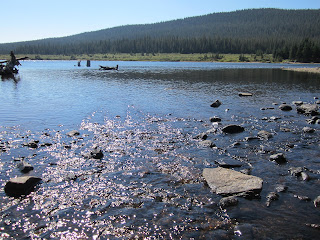 I unfortunately didn't get any good rock-skipping photos. 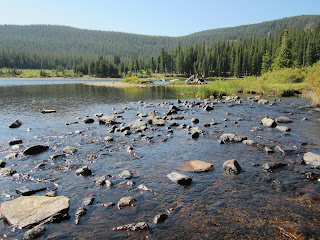 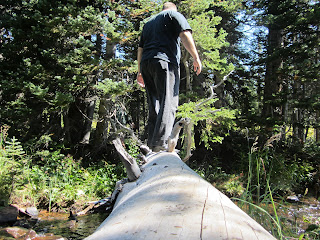 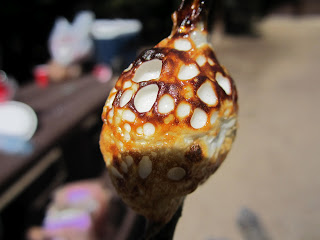 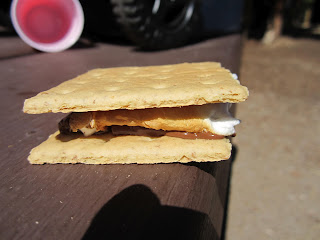 I ate lots of these. As in- before the pancakes were even done I'd had two. 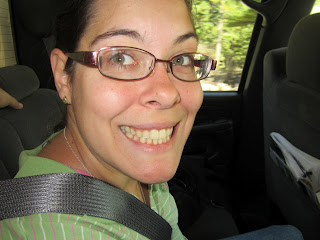 I don't LOOK motion sick here do I? Actually, I did not get sick, but the Dramamine sort of made me loopy for most of the rest of our day. Riding in the backseat of a crew-cab pickup truck through winding curvy roads is not very fun. 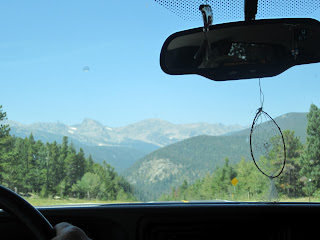 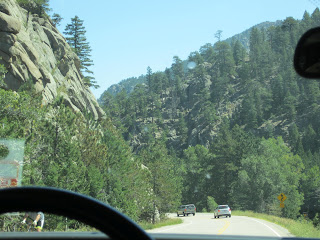 Next time, I will bring Grunt and Jackjack with us. I think they would love to come along, and explore the woods, lakefront and stream. I also want to have my rubber boots along- it would be fun to walk up the stream I think, and wade in the lake, but that water is COLD.

Last night (I know, it's not technically part of the weekend, but it's my blog, so there) we had some truly wonderful food. Jamie got the idea to recreate a Thai soup that we've had a grand total of one time before in our lives. I'm not sure exactly what is in it to make it so darned tasty, but I had it again this morning straight from the refrigerator. It is just as yummy cold as it was hot last night. I do know that there is coconut milk in it, and pork, zucchini, asparagus, and potato. A little bit of Sriracha in the broth makes it a spicy soup, but not too much for me. The boys both added a bunch more to their bowls. 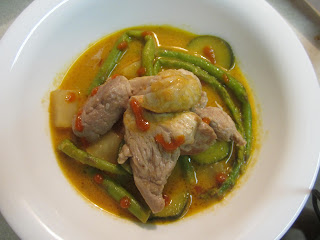 Then, after that wonderful dinner, we were standing around in the kitchen and I noticed that over the busy weekend our last few peaches were nearly non-edible. Jamie said they'd have to be cooked since they were too mushy to hold and eat regularly. Thus, we issued a Chopped Challenge* for dessert. Ingredients? Peaches, Jameson's Irish Whiskey, coffee, and oats. 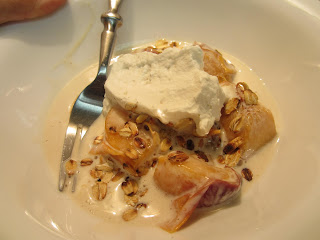 I can't remember what he called it, but I call it Peachly Heaven.
I am so spoiled.

In other food-related news: I cannot eat peanut M&Ms! I've tried one more time since we got the giant bag of them, thinking maybe the first time was a fluke. Nope- M&Ms with peanuts in them completely upset my stomach. As in, the first time I was thoroughly convinced that it would be handy to know how bulimics throw up at will. I didn't have the guts to try it, but I was sure that it would have been a quick fix. Instead I laid in bed gingerly on my left side hugging a pillow with warm Jackjack against my back. Any other position made it worse. I thought maybe the combination of spaghetti sauce with too much sugar might have done it. I wondered if it was simply too much sugar. But did you SEE the photo of that S'more up there? I ate bunches of those plus pancakes and orange juice- it can't be sugar-related. The second try was with a very small handful of them (and I have pretty mall hands to begin with). I wonder if regular M&Ms would cause such a discomfort also.

To be honest, I've been really happy with cantaloupe for sweet-tooth needs, and now we have another one of those plus a honeydew and grapes. I wonder if maybe I'm just not a manufactured-sweet-type person anymore. The pancakes were awesome, and the S'mores too, but those are both things that I don't think I'll want again any time soon. That bacon, however, is another story!

Anyway, other than the M&Ms, I had a wonderful weekend. I hope yours was great also!

*Chopped is a television show on the Food Network where four contestants receive the same basket of 4 mystery ingredients that must be combined to create either an appetizer, entree, or dessert dish in each round. The worst dish gets that chef "chopped" until one remains who wins $10,000 for the best dessert dish and all-around meal.
Posted by Red-Eyed Tree Froggy at 11:17 AM 4 comments: