Over the weekend our doggies ran out of food. They had enough for dinner Sunday night, but nothing for breakfast. We humans were also dangerously low on toilet paper. These things weren't something that could be put off, so I decided that I needed to go grocery shopping on the way home from my morning bus route.

Jamie's old bike Vandal has been given to a coworker, but it still has the trailer hitch on it. Luckily, I had ordered a second hitch so that we could easily swap towing duties between us without having to break out the multitool every time. That gets tedious after a couple swaps. I had forgotten that I'd need to install the hitch, though, so I was almost late to work. It's not the best way to start the school week, but it could have been worse. Off I went hauling a bouncy empty trailer.

I wonder if passing drivers thought I was abusing a child in there. For some reason the chance that they might think so was hilarious to me. Maybe because I've chosen to drive dozens of children around safely for a living?

After work, I pedaled off to the store. The wind wasn't directly against me, but it was blowing steadily about as fast as I pedal on a bad day- so maybe 7-8 miles per hour. I went to King Soopers first- it was directly on the way home, so it was closer, while Sprouts was nearer Jamie's commute route home. I only really wanted milk from Sprouts, so most everything else would be purchased first.

Eggs are only a dollar! For 18 of them. I think that's a great deal, right? I got two. Jamie had also requested Diet Coke. Those were 3 for $12, so i went ahead and got three, why not? I also got the 46lb bag of dog food we always get. Making trips to get dog food is somehow abhorred by Jamie, I'm not sure why, hehe. So we get the jumbo package.

Dogfood on bottom, soda on top, eggs carefully AWAY from crushing danger in the perfect dimensions of my saddlebag (YES!). Off to Sprouts. Our last gallon of milk disappeared extremely quickly, so I bought two this time. Jamie also requested nuts from the bulk bins (the candy section of Sprouts, even you don't consider the chocolate-covered offerings). I wasn't craving anything, and the only free samples were the tiny oranges we had at home, so that's all I got there.

The trailer was very heavy. It's been quite a while since I hauled anything with that much weight. Grunt and Jackjack probably only weight 60lbs between them- 40 for Grunt and 20 for Jack. I wonder how close that load was in weight to the one Jamie hauled a little while ago? The wind fought me only a little bit, but I definitely felt any little uphill. It was funny, because slight downhills were equal and opposite- the trailer pushed me along very eagerly and it was a nice change of pace from the usual effort of pedaling. Flats were a piece of cake... once I got rolling. Getting started was interesting.

But, I made it home just fine, spinning along fairly easily in the first and easiest gear. I even brought the groceries up the stairs all myself after I took the puppies out. They were very happy for breakfast. As they both contentedly munched up kibbles, I checked email. A list of nearby Meetups had one for road bikers. Sitting there, I had the crazy urge to go right that second and hop on a road bike and go. Somewhere, anywhere, but far and FAST. It was very strange. I don't own a road bike. Plus, I had thought only moments ago that my legs would be paying dearly for that weighty trip. In fact, the commute to work was just fine, as was the ride home. I guess spinning along was an ok thing for them to do.

I didn't think to get pictures, sorry. Here are some icicles instead. The weekend's snow is clingy stubbornly, but the melt is happening regardless. Come on, Spring! 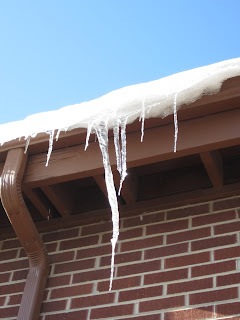 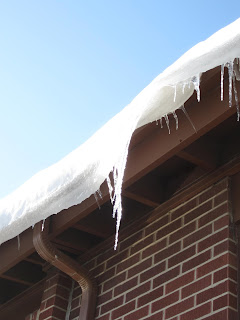 The sunlight made these glow so prettily. 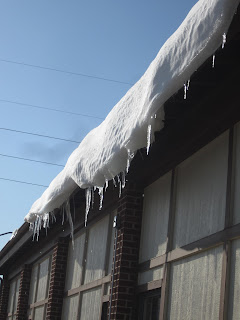 Now. Despite the success and relative ease of my morning shopping trip, I missed one crucial item on the list. Can you guess what it was? 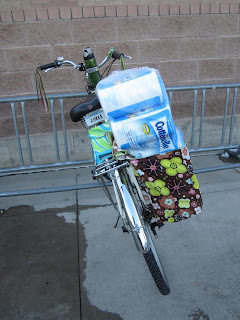 I don't like that bike rack. The lower bar is so high off the ground that it makes Zoomie lean rather precariously, don't you think?

Speaking of bike racks, I'm tired of getting ice pellets dropped on my head and down my neck from those stupid metal things on the tops of glass walls around here. I see those thing in the new schools all over the place. Are they sun shades? Well, they freaking collect snow and then hold it menacingly above you to rain icy frustrations in the form of ice pellets and drips of extremely cold water and did I mention ice? Enough!

I moved the bike rack at work.

And that was my Monday, how was yours?
Posted by Red-Eyed Tree Froggy at 7:37 PM No comments: