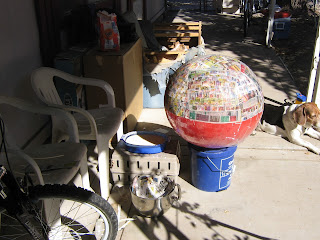 Tuesday ended up being taken by extra bus runs, for which I am not complaining, and tomorrow is a field trip. I'm supposed to have a paper mache globe finished by this weekend, I figured today I better get moving! I started it ages ago and we have had half a sphere laying upside down on a coffee table. I just hadn't really ever felt like re-inflating the sphere to the right size to do the other half. What can I say, I'm lazy.

But now we're starting a new Pathfinder campaign, and instead of this being a globe for Jamie's world, we decided it would be much cooler to make the Pathfinder world. We also don't plan on letting it take up space here at home. A Pathfinder globe would look really cool strung up in the game store. 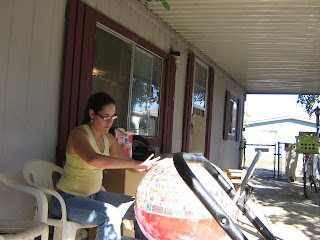 I am totally working hard in this picture.
(It isn't staged at all with a self-timer and clean hands.) 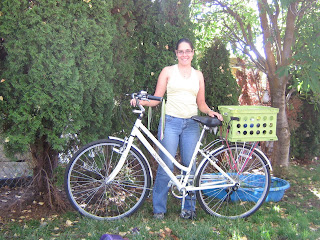 Also, I've taken a look at my kickstand. I got mad at it and sort of stomped it to bent it back. Then it wobbled when I got home and I felt bad. I looked and there is a monstrous allen head bolt that I can tighten to fix the wobble. Perhaps that is the issue causing all the trouble in the first place. I'm sorry bike, I should not have been angry at you.
My Bike needs a name...

It doesn't have a neat model name like Betty Foy or Oma, but I think it would be neat to refer to it by name rather than "my bike." Do you have any suggestions on names for my bicycle?

I have lots of projects I should work on. Some sound more fun than others: globe, beading, wrench roll, vest, handlebar bag and crate liner, jacket... I have to hurry up and get going or the list will get too long!
Posted by Red-Eyed Tree Froggy at 12:17 PM 2 comments: