I realize that it has been some time since my last post. I realize it, make a note to write a post, and then never get around to it.

I passed my CDL test. There was some drama at the DMV (why can't they use the license I got 10 days ago as proof of address when i haven't moved? Here, have the EXACT SAME lease I showed you 10 days ago, yes it is still for an entire year of living there.) Then there was a whole lot of... nothing. I didn't have to get up early, I didn't have to do anything.

I felt, and still feel, a little bit lost. I could go ride my bike, but where shall I go all by myself? I could try to teach the dogs to ride with me, but I haven't gotten up the drive to drag the trailer downstairs and stand with Grunt in the hot sun trying to get him in it while he howls at me and Jackjack wonders quietly why we aren't GOING. I could sew, but so far I have not had any motivation to touch that stupid vest again to try and make it work, and somehow screwing up the vest has killed my urge to make the cute skirt wheich was supposed to go with it. I could find the scraps necessary to "fix" my tank top, or the pants that go with it, but again, I haven't yet. Maybe I need a new quick project to get me jump-started back into the swing of things?

I hate our dryer.

The dryer has tried twice to murder my clothes, once was successful, the other only attempted murder. I have lost one of my better bras because the dryer somehow ripped off the back of it. Usually it's not uncommon to find a hook bent straight or wildly crooked, or even mashed flat somehow, but this was brutal. The dryer completely ripped off the back of the bra! There weren't any straightened hooks, because there were no hooks at all. The article of clothing that survived is one reason why there has not been dryer homicide in our apartment.
My favorite shirt has a wonderful colorful pattern that I love, and it is a 3/4 sleeve knit shirt with drawstring ruching on the sides. The two drawstrings dangle. The dryer likes to bite anything with strings like an alligator and just like the reptile it will mercilessly death-roll it. I found my shirt twisted in horrible knots with a few other bystander clothes thrown into the works, and the drawstrings nearly ripped off. Really, it's a wonder that they survived. The second attempt on my shirt's life was completely unintentional- I think Jamie was helping me with laundry, or perhaps the shirt hid in a pair of pants or something. It barely survived that drying too.

So, I'm boycotting the dryer! Nothing of mine shall be dried in it again for the remainder of our lease. I'll still put Jamie's clothes in there (he has no fancy ties strings, or elastic to worry about). Mine will be air-dried on hangers in the closet. Hmmph.

We got sheets for our bed. Finally I was able to unpack the glory that is the quilt made by my grandmother just for us. She said it was her wedding present since she was sick and unable to attend. As you look on this photo, please remember that the proper amount of awe is simply unachievable for you, as you aren't able to hear the "ahhhhhh" sound of the angels singing as you behold it. Sorry. 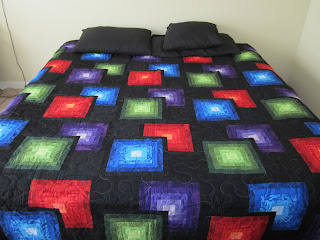 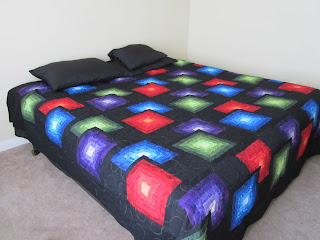 I also rotated the bed. The hallway is the the right in this photo, I'm standing nearly in the closet. 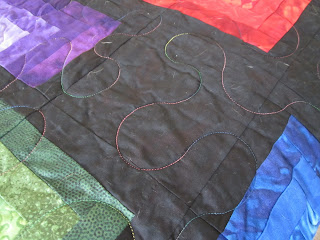 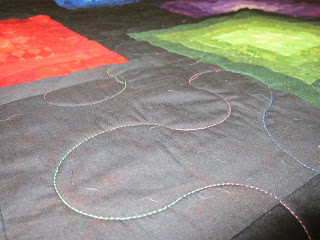 The name of this quilt pattern is "Cosmos". The original colors for the glowing color block was red, orange,green and blue, but we swapped orange for purple. I think it is less Crayola this way, ad more balanced, more cosmicky. The effect of this awesome quilt is marred only very slightly with the addition of dog hair, which is a good thing because my little Jack Russel is losing so much hair I wonder how he isn't bald.

Speaking of dogs! Good grief, they are weird.

Jackjack is old, I understand his excuse for not really having a clue of what is going on and how to communicate urges which have sort of become sudden for him. The general rule now is- if you left the house, even for half an hour, take him outside, he has to go. If he gets up and begins to wander, you must get up and be sure all the basics are met- food in both bowls (uneven bowls confuses him greatly), water to a relatively high level, something soft to lay on, and has he been out recently? If he doesn't go for the food or water, he has to go outside, because likely he was laying on the soft thing already, and he doesn't leave those very often. You have to notice him moving around, too. He may occasionally make a noise, but because he is deaf himself, this is not guaranteed. If he stares at you for more than 3 seconds, he then assumes that you don't particularly care whether he pees indoors or out, and so he will proceed to relieve himself where the urge strikes next. That could even be right in front of you if you misinterpreted his catch-all stare-signal.

It only took him a week or so to figure out the new way to go outside (leashes are required and a short walk, you have to tell me before you're leaking!). We have a baby gate and just like at the Oregon house, he gets shut into a room (our bathroom) with linoleum flooring with his water dish and comfy bed, sometimes food if we'll be gone a while or he hasn't had breakfast yet. He is content to lay in there and snooze until we return- whether that span of time is half an hour, or most of a day. The first few times he was not a good dog in there- he wet the bed and then dumped the water out and traipsed it all over the floor and looked pathetic when we got back from even the shortest grocery run. I decided that maybe he hated peeing on linoleum if he had to go because it splashed him, and so the newly washed bed was put down with a hand towel. I have no idea of my theory is correct, because he stopped having accidents in there at all.

Grunt, on the other hand, is being a complete dummy. I'm not sure what his issue is. On those same short trips, he absolutely has to pee on a wall. Usually it is really easy to find because there is yellow on the baseboard, and it isn't like he is having accidents- this is marking, not Lake Erie bladder overflow. I tried putting him behind a short table in the kitchen. He did NOT respect the boundary like I expected at all, and tore the slightly padded covering off the folded table, escaped the kitchen area where he had a set-up like Jackjack, and then also peed on the wall. Huh? We had put chairs with backs in front of the table to keep him honest and not jumping over it where he could hurt himself, and that little Houdini had none of that. We had to out that very same day and so we tried swapping places- Grunt went into the bathrooma nd Jack in the kitchen. Grunt chewed on the bottom of the door and locked himself in. It took no effort to get him out, but he certainly was not thrilled when we did!

I have tried everything I can think of to make him behave, and short of stuffing him into a crate when we leave, or maybe having his testicles removed, I don't know what's gotten into him. It makes me sad to have to yell at my dog, but its pets acting just like he is acting that are the reason why people have to pay huge stupid deposits and fees to own pets. He wasn't suppose to earn that fee for us!