Pause to Catch a Breath. No? Never Mind Then

Since my post last Monday, it seems like I've been very busy. My mom's birthday was on May first (Happy Birthday again!). I'm not entirely certain what happened to the rest of the week. Let's see...

I had a field trip on Thursday, and then Friday there was no school due to the end of the grading period. I believe I was extremely happy to have that field trip, because I needed a substitute to cover my elementary run due to time overlap. This meant that I did not have to deal with those younger kids. With the end of school nearing, it seems like all I'm doing is talking to the microphone telling kids to sit properly and not play so rough. One student in particular has been really aggravating. He is a sullen boy with an attitude. I don't think he is ever happy, and despite my efforts to cheer him up or make conversation as he enters and exits the bus, he hasn't changed.
Recently we flip-flopped the seating chart. Originally I had seats assigned based on bus stop, with the kids getting off the bus in the afternoon from back to front. Now they get on the bus in the morning and take the first available seat, and in the afternoon I have a bus emptying out front to back. This new arrangement puts most of the older kids towards the rear of the bus, where they very much feel they have the right to be. Well, this older Sullen picks on a younger student whose stop is right before his. So, the chart was fudged slightly to give them a seat-worth of separation. When I flopped the seats, I fudged it slightly more to give FOUR seats of separation. This younger student is incredibly outgoing. So, the Sullen chose a new target to bully. I received a report of this, and had him sit in the first seat up front to my right. He threatened to cause trouble the entire ride home that day, and we nearly stopped before leaving the school to talk to the principal. My threat worked, and he promised not to cause mischief. He was true to that until Target2 went to get off, where I saw Sullen subtly stick out a foot in an attempt to trip the other boy. This made me incredibly livid, but I said absolutely nothing at all.
Monday morning I arranged to have the principal meet my bus shortly after we arrived and everyone else was dismissed. Sullen had no warning whatsoever, and I explained the situation to the principal. Earlier that year I had written a referral on one of my other students, and had been requested to allow the principal to talk to students personally before bus referrals were used. The arrangement actually worked pretty well- the threat of the principal was enough to keep everyone mostly in line. Sullen had been acting inappropriately for quite some time now, but nothing in itself was consistent or disruptive enough cause for me to justify disciplinary action. This time it was, and I've had it.

Still, I was glad not to have to deal with Sullen on Thursday.

Saturday was our normal game day, and also Tig's birthday (Yay!). I made special strawberry-poppyseed cupcakes for her. I was told that was her favorite cake, and I just happened to have received a cupcake recipe book from a coworker. Perfect!

Jamie made delicious cream cheese and strawberry frosting, because the store-bought icing tasted funny. His mom cut the strawberries into little heart shapes for the top, just like I wanted! 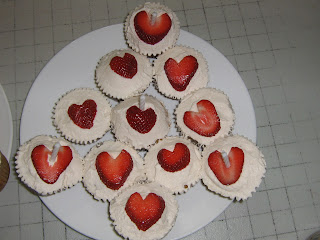 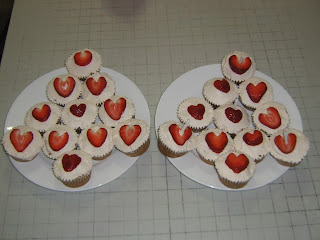 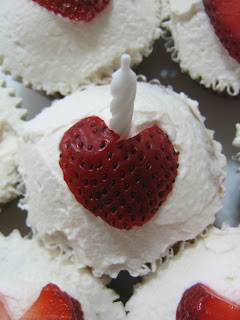 The boys, not to be outdone, decided to make a cake too. They didn't use a recipe. Both have worked in kitchens pretty extensively, so they know the basic ingredients for a cake.
"We need flour."
"How much?"
"'Bout that much."

They made a yellow cake with pineapple, like an upside-down cake. The cream cheese frosting for this creation had green apple soda in it. They drizzled honey on top and sprinkled it with brown sugar. 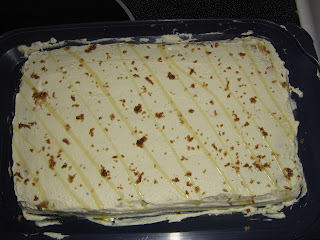 They named it the Bro-Cake.
It too, was delicious.

Jamie's mom fulfilled his special request and made quiche as well. We had a busy kitchen, that's for sure. Quiche is apparently a scrambled egg pie. One had mushrooms and vidalia onions, and the other, which looked much tastier to me, had spinach and bacon. 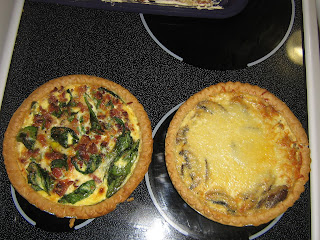 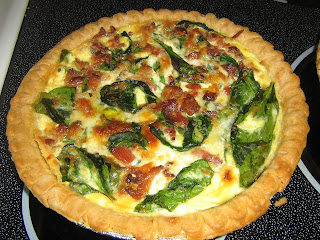 I found out that I don't care for quiche, but everyone else agrees that they were fantastic.

Mike created our special birthday dinner. He remade a dish that we had tried out just the night before, I think. He took meat, cream cheese, and spinach and stuffed them into a delicious browned puffy pastry- the whole thing is called a roulade. I ate too much and forgot to take picture of this one, sorry!

Then, Sunday was Tig's birthday, round two. We visited her parents for their chance to celebrate with her. They grilled meat and vegetables, baked potatoes, and Val made a cobbler-type desert from crumbled M&M cookies, strawberries and mixed berries, and whipped topping. It was surprisingly good, and my tummy was very full after all that potato and french bread. While waiting for dinner, we played Frisbee golf in the horse pasture. Jamie almost bounced his Frisbee into the bag, which was our ending goalpost. He also spent the day cleaning a grill which we have now been loaned. Hooray for future delicious dinners!

Yesterday started out as a normal day, except that I had sloshed around and then didn't have time to cook eggs for breakfast. I ran out with a glass of milk in my stomach, and a small container of carrots to use as a snack until after my route, when I would go home and eat properly.
Instead, I was called over the radio and asked if I could substitute for a field trip. Of course I can! Field trips  pay a much higher rate, for a guaranteed minimum of 2 hours. So, I took students from the elementary school I service to a community swimming pool. This pool is heated geothermally, so it is available to use even in winter, I hear. I nibbled my carrots, then after 2 hours (I practiced French braiding), took them back. I promptly cycled to Subway and ordered a BLT with spinach instead of lettuce. I ate the entire foot-long sandwich, sitting leisurely in the sunshine and enjoying life. Then I went straight back to work, it was time for the afternoon run.

Today, I loaded up all our dirty laundry and pushed my bike trailer/stroller to the laundromat. It took a while, but I brought my book this time. Then I got back and patched the hole in the air mattress that we had spent an hour searching for before Jamie had left for class. I am out one more bicycle patch, but now our bed doesn't sag after a couple hours and put us on the floor.

When I got home from work, Jamie and I went with Tig and his mom to the locally-owned Home Depot equivalent to purchase supplies to make the separation between our backyard and our neighbors (another section of the same property) truly private. We added large flat fence slats to the metal gate, and rebuilt the side gate while we were at it.

Once we were done with the gate, it got left open while we were distracted closing up the last small hole in the puppy-containment perimeter of our back yard. Jackjack decided to take himself for a walk, since I never take him to work with me like he wants me to. We searched frantically for what was probably only a few minutes, but seemed like eternity. I hopped on Zoomie with Jackjack's harness and pedaled down our street. Several people were outside, and they reported not seeing him. I turned down the dirt road behind our row of houses when I got the call to let me know he had been found.

Jackjack had headed straight for the busy road, walked the wrong way down the bike lane next to traffic to the next block over, and sat at someone else's house and whined at their screen door. They let him in, took a picture of him, and a boy of about twelve had been wandering about asking if people lost a dog that looked like this? Jackjack is very unique- he has a cauliflower ear, stinky dragon breath, and nearly no hearing (makes finding him rather difficult "Jackjack, come here Jackjack!" oh yeah...). Jamie carried him home, where he got lots of hugs.

And, to top all this off, my term for jury duty started this week, and I just found out that I need to be at the courthouse tomorrow at 8am. I had been hoping for a regular slow day to catch my breath, so to speak. At least I get to sleep in.

Zoomie has a never-ending squeaky coming from her drive-train somewhere. I've wasted half a bottle of chain lube on every part I can think of to no use- something still relentlessly makes noise. Also, there is a very ominous clunking from her bottom bracket. Forum replies to my inquiry lead me to believe it could be a symptom of something catastrophic. I hope its just a loose pedal or the chain shifting in the chainwheel teeth?

And finally, my french braiding seems to be getting better. 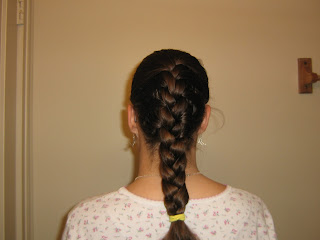 My first try. I was bored, and this is with damp hair. 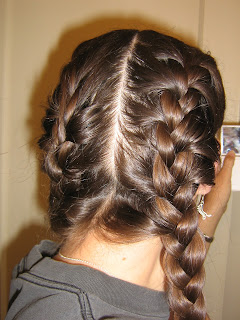 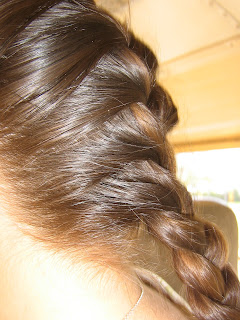 Practiced while waiting at the pool during Monday's field trip. 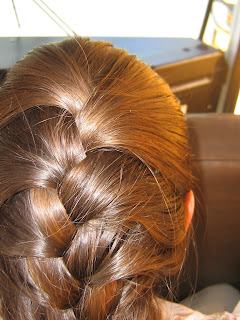 Looks almost right. I'm getting better!
French braiding requires a completely different method of holding the hair in my hands than the way I taught myself to braid regularly.

And that is my past week, in a very large, long and complicated nutshell. I did try to condense.

How hectic or calm is YOUR life right now?
Posted by Red-Eyed Tree Froggy at 10:09 PM 1 comment: