I Love My Job

How many people can really say that, hmm?

I am proud to say that I am a school bus driver. I get paid to drive around like a little old lady, being safe, and playing (sort of) with children. I get to channel my inner child and talk about silly things like doggies and video games.

I get more holidays than you could want, every weekend off, and if that weren't enough, I get an entire summer of vacation every single year- plus a vacation at Thanksgiving, Christmas, and even one in springtime to balance it all out! Yet I think I make a decent wage, and I don't even have to slave away all day in a cubicle. If I DO want extra money I can always bid on field trips. Some of those can be really fun. Some, like basketball or other sports, means I get a couple hours to do some knitting or a small beadwork project AND I GET PAID FOR IT. How awesome is that?

You don't even have to do it by yourself if you don't want to- special needs buses are not the super-scary dramatic panicroom that I always feared. A lot of those kids are able to communicate and interact with you just like any other kid. I have to admit- I suck at driving electric wheelchairs! I also think a wheelchair lift has all the necessary attributes to qualify as A Toy- whether the thing works or not- manual operation is fun too!

Anyway, I have a new route, and I promised to go into details earlier, so here you go.

I now drive a baby bus! I get to open the door to let students on and off manually, the door is not pneumatic. On my side is a regular driver's door. It's weird. I'm supposed to be way up high and look out a big giant window over a row of control switches... or not. In this bus I have a (baby) control panel above my head. I originally thought that would be a problem because I'm short, but once I scoot the seat up I'm fine. My seat gets set one notch back from knees-touching-the-steering-column (which is I think the furthest forward anyway). I don't get any emergency window exits, but I DO get a rear door and roof hatch. When I put the column shifter into reverse, I get a back-up beeper, hooray! The vehicle is yellow with black stripes and I am  mostly content.

I need to mop the floor. It is a very light color and the dirt bugs me. Also, I have seat belts.
/twitch
I hate seat belts. They bang around. They rub the dirty floor and thus also are usually filthy. The kids look at you like you've got a third eyeball when you dare suggest that they actually touch one, much less buckle it around themselves. Then they grumble or something similar when they realize the bus isn't going to move until that buckle makes the clicking sound. /sigh

My bus doesn't like the cold. Actually, I just don't think it likes waking up at all. It snoozes through the night and then snoozes in the middle of the day- and it is very slow to wake up. Its freaking annoying, is what it is. Until the engine warms up, the bus sputters and heaves and seems to choke on its diesel. In a gasoline car I'd think the spark plugs weren't firing correctly, or maybe the fuel filter were clogged. I've described it to the mechanics, but no one seems alarmed by it, just mildly surprised. I think I'm going to write it up tomorrow anyway just to have them check it out. In the morning is the worst- I can push the accelerator and nothing happens- the bus seems to want to go, but it crawls forward, it can't go fast, it can't, it can't, and then ZOOM, it catches up with itself. "Og THAT"S how fast you want me to go?"At a steady 55mph (our district says we can go speed limit which means it could be more than 55 if that's the limit- wow!) the bus will sort of spit, where it has this sort of hiccup as it goes down the road. It's aggravating. Yes. I'm writing it up- my bus could be sick and maybe even just getting some inspection attention from the mechanics will make it feel better. Or then again, my bus just may not be a morning person.


My first day, actually my first morning, I got very sick of railroad crossings. I distinctly remember joyously proclaiming something along the lines of me happily holding up traffic at every railroad crossing.... yeah right. Luckily, the road changed almost immediately so it wasn't quite so ridiculous. Also, I discovered that a couple of the crossings, being located in or near an intersection controlled by traffic lights, were exempt so I didn't have to stop for those. Now I have a much more reasonable number of tracks to cross every day. It also helps that I figured out which direction does what for the window crank- which is wedged up right against because it has to be so far forward. I've learned to hook the knob between thumb and forefinger and just rotate the crank open-handed. Kind of like a kid making the motions for a choo-choo train chugging along- you know how the wheels are hooked together by that bar? Chugga-chugga chugga-chugga CHOO CHOO!

My kids are a tiny sprinkling of each age group. I get a few high schoolers, some middle schoolers, and elementary. The only ones I don't have are the itty-bitty guys, which is awesome. I dislike star seats (basically booster seats with a 5-point safety harness instead of only a lap belt) only because most of the buses here have awkward L brackets in the frame that makes getting underneath to unlatch the seat mandatory in order to install the things. A lot of my kids speak Spanish. It makes me very seriously consider taking classes somewhere in order to learn it. Overall, I have a small group (it's only a baby bus, after all) but with a lot of variety. I think its perfect.

And lastly, I simply must share a picture I took. Yesterday, one of our buses had to be towed. I happened to  fall in behind it on our way back to the bus lot, and it was the saddest thing I have ever seen in relation to buses. The poor broken bus was on the tow truck backwards, leaning forlornly to one side, with a giant slash of a mouth which was the trailer lights. :`-/ It put me in mind of a cartoon car, all broken and dejected making a sad face or crying- you know how animations can be. We got stuck at a light, so I whipped out my camera and took a picture. It would have been better at a straight-on angle, but oh well. 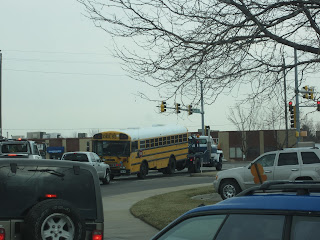 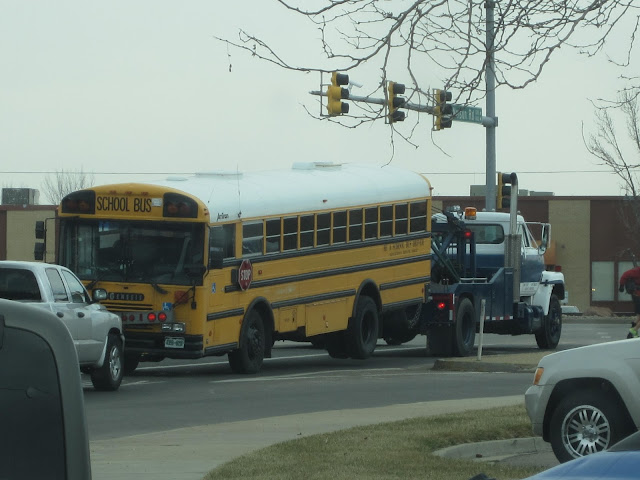 Poor bus. I felt so bad for it.
They don't deserve to have their rear ends stuck in the air going backwards down the road. How undignified.
Get well soon, bus!

Posted by Red-Eyed Tree Froggy at 7:36 PM No comments: