The rules for dark errands state that we should document the type of lighting we use, so here is that required Proof of Darkness and my lights.
I have: an LED Maglite flashlight affixed to my handlebars thusly with an inner tube, a Bell Radian tail light (my husband uses the headlight from the set), and 2 green Nite Ize spoke lights.
I recently broke my generator set, and have since attached that red light to the seat post as it was meant to be. 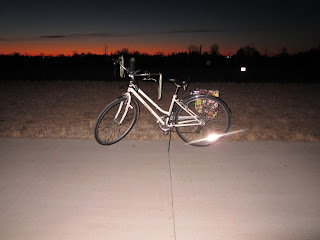 Ok, ok. These photos are from the 13th last week. I still thought they were cool, and they showed my lights. 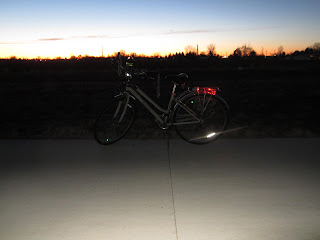 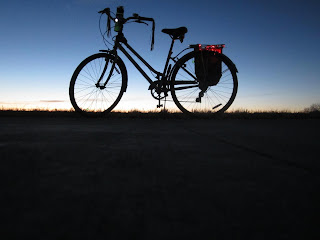 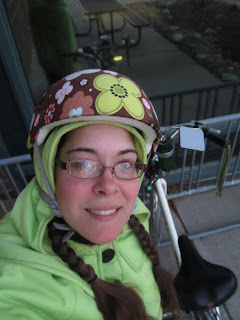 Yay for commuting to work by bike!

Here are the actual photos from the errands on the 19th: 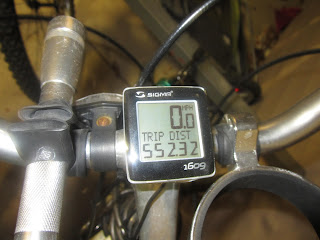 I started wishing for exact mileage, so I took photos to best document that. 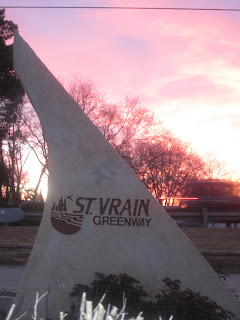 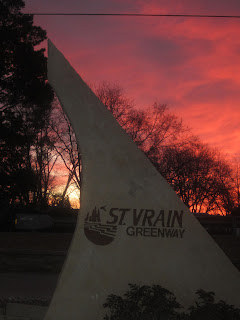 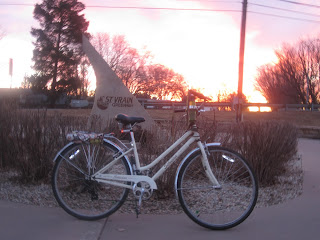 I observed a beautiful sunrise. 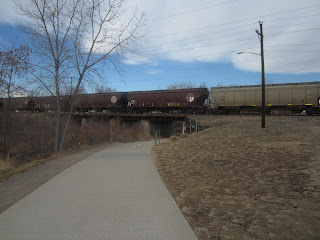 A train on the way home :) I LOVE the greenway, I get to go under the roads, so there is no traffic at all to deal with, not to mention geese, people walking dogs, the occasional wild fox, otter-looking thing, or group of raccoons to make things interesting. Last fall I got apples from the trees in the park and made a pie!
I love Longmont. 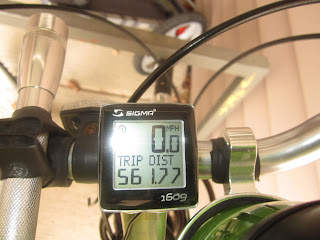 9.45 miles round trip using the greenway, or long way, to work and back.

For those who don't know my husband and I, he handles our money. He is a wizard at making things work, and when we were extremely poor, things somehow never seemed that awful, and we never fell behind on credit card payments due to his masterful juggling skills. Now that we are better off, things are still working that way because it's nice and easy for me. I am content to let him handle details like that, but when I suddenly decide to go grocery shopping for an errand, he gets mildly surprised. He let me know that with my birthday over the weekend and several bills coming due, I should not spend anything else without checking with him first.
Rather than call him to check everything, I decided to add a new spin to the Errandonnee challenge, Mustache-style! For all of the rest of my errands (7 more to do!), I will complete the challenge without spending ANY money. With most of the categories being things like Breakfast or Lunch, Dinner, and visits to various shops, I figured this would get interesting.

Luckily, I knew just how to get some free dessert. There is a fantastic bread store just around the corner from work. They sell bread, jams and jellies, and sandwiches. They also always have a lovely board on their counter with a selection of wonderful delicacies, of which you may always get a slice for FREE.
I knew they closed at 5pm, which is right around when we get back from our afternoon route, so I hustled over there half expecting my plan for this errand to fail and need be attempted another day.

Hoorah! I made it. At the end of the business day, their board was rather bereft of goodies, but this is what greeted me inside. 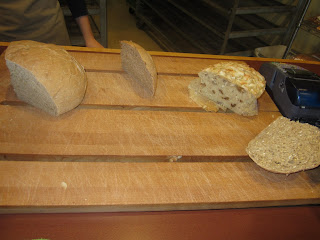 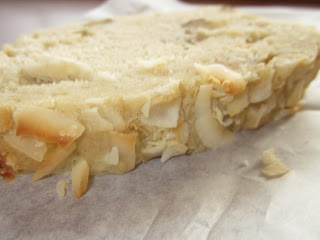 I chose the coconut walnut bread. I believe very much that it counts as a delicious dessert treat, and the perfect snack to fuel a ride home from work. 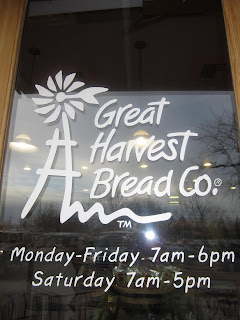 <3
Oh wait. Are they open until 6pm? I think perhaps there must be another sign with different winter hours. Or, I am just a silly goose who panicked for nothing.

As I left, I noticed a funny sound that Zoomie was making. It reminded me of a stud screw hitting the fender, only more quiet. My tires do have a bit of damage in the tread which causes bulges, but my tire should not normally rub. I discovered that my axle nut was loose. I did not properly tighten it enough to keep it snug when I re-installed the trailer hitch for Monday's errands. A quick pause with my multi-tool saw me on my way again. 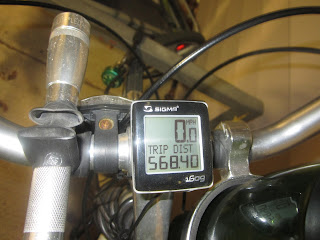 Mileage = 6.63 round trip for the direct route to work (I mean the dessert shop) using roadways.
It is about 10 minutes shorter to go that way than take the squiggly greenway trail, but I hate being next to traffic, watching for the idiot driver who isn't paying attention and tries to run me over. It annoys me that the bike lane randomly disappears before a busy intersection, to reappear just beyond it. As if cyclists will just not travel there or something (at one point the eastbound sidewalk also goes on hiatus, forcing travelers into the bike lane anyway, it is beyond the bike lane break, at least). Going home westbound along this route is downright treacherous. There is a sidewalk on only the south side of the street, and ALL times I have used the sidewalk have resulted in near-misses versus cars. One of those was a miss by only a few inches, and I am an extremely cautious cyclist!* I use the bike lane at all times when taking the short way home- its a necessity. 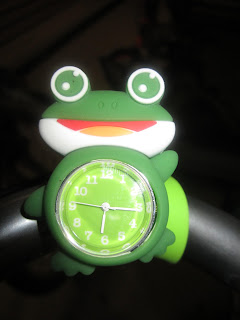 Ok, so that mileage picture was just before my commute the next morning. I also decided that I've found the perfect place to put the froggy watch I got for Christmas- on Zoomie's handlebars! Sure, my computer will tell me the time if I click through the functions, but now I have a froggy on my bike! I just looped the rubbery  wristband around twice. After explaining how I attached my flashlight, I realized the watch was rubbery just like an inner tube.
Isn't he adorable??

*In this instance, I was traveling westbound (on the sidewalk against traffic as a pedestrian would- there is no sidewalk on the proper side of the road) and a car stopped at the adjoining street well before the stop sign and side walk. There was no street lamp to allow me to see inside the vehicle. I had paused, and, seeing the car seemingly waiting for me to cross, I thought I was definitely seen and acknowledged and it was safe to proceed. Apparently not! As I resumed normal traveling speed, the car suddenly lurched forward. The driver had not seen me at all and was finally pulling up ready to look for the opening in traffic to turn right. Too late to stop (the front of the bike would have been right in the car's path) I swerved away and accelerated faster as best I could, certain that Zoomie's rear wheel would get hit and we'd be sent sprawling. To my knowledge, the car driver never even saw me until I reached the other corner of the sidewalk and stopped, adrenaline and heart racing. I chose that moment to break my customary practice of not cursing, and turned around to express my fright with a few choice words and a gesture. I never did get to see the driver through the dark glass. With all the other times I've had to hit the brakes to avoid either hitting a car that pulled in front of me or letting them hit me, that is the very last time I have traveled along that roadway using the sidewalk. I take the bike lane, imperfect as it is. At least people see me there.
Posted by Red-Eyed Tree Froggy at 2:08 PM