After a very early holiday weekend to celebrate Valentine's Day and my birthday, I was taking advantage of no school Monday for President's Day as well. I love it when the dates line up like that.

Instead of feeling inspired and creative at the free opportunity to get something crafty done, I felt mopey and down instead. Usually that only happens after days of gloomy overcast skies without a peek of sunshine or the novelty of snow. I figured the perfect cure would be a bike ride!

I remember having the thought that it would be nice if I could take the dogs somewhere, like Petsmart to sniff around, or maybe a park. But, my dogs have not been trained to ride in the bike trailer. We've only managed an introduction of sorts, which, while promising, wasn't THAT much of a success.

So, I started planning an epic errand trip, figuring I could just go out and visit a bunch of places. After I did all that, it sounded like a lot of work, and not much fun. The whole idea was to lift my spirits, not crush them and tire out my legs before the school week had even begun! I decided that if I never took the puppies anywhere in the trailer, then I could expect them to never learn to like it. I crossed out my entire agenda except for one thing very close to home: a trip to the grocery store and of course the neighboring Petsmart.

I'm calling this trip as part of the Personal Care and Health category, along with a grocery store run. If a beer run counts as ok for keeping mental health, then a simple joyride with puppies instead of beer counts as mental health!

I am proud to announce the trip a success! My beagle was officially Not Happy with a bicycle trailer as a means of conveyance.
Previously, he has announced loudly and in howling Beagle fashion his distrust of bicycles in general. He believes they are going to eat me, perhaps. I can walk next to one pushing it, but I suppose a pedal is the magic button for bicycle homicide, for he goes crazy when I actually try to ride it. If you watched the videos I linked above, you can see what I mean in the third one. And, Grunt goes nuts, he can get Jackjack to join in on a terrible chorus that makes people think I'm murdering dogs. 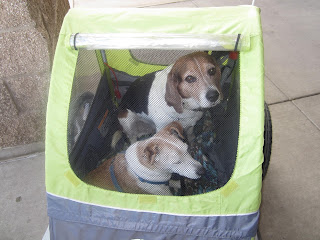 They are not thrilled with this particular mode of transportation (or maybe only Grunt thinks it is silly), but they definitely enjoyed the destination! Look how good they were in a very short video clip HERE.
What I learned: My dogs are HEAVY. The trailer was harder than I thought it would be to pull.

Grunt whined a bit, but his protests were mild. Every time he caught a scent in the wind, he would forget that he was supposed to be complaining, he sort of does that in the video. I have to say, I'm impressed it came out so well- it's sort of hard to aim a camera behind you while you are steering and keeping balance at the same time.

We enjoyed exploring Petsmart. I was worried that Grunt would be a pain following his nose, but he has gotten MUCH better at walking on a leash since the last time we tried it. He only attempted to mark the concrete pillar outside the store also. Jackjack took a bit of time to hop out. Inside the store, Grunt was the perfect gentleman, so I was thrilled.
We got a cookie at the checkout register. Grunt originally snubbed it, but Jackjack thought it was tasty and crunched his up while a lady and her two children came up behind us. Suddenly with an audience, Grunt decided eating a cookie was a cute thing to do, so he graciously accepted a second offering and ate it before his adoring fans.

Done with the fun part of the trip, I wasn't certain how the dogs would handle being left alone while I did the grocery shopping. I had a hankering for hot dogs for dinner- the perfect excuse to run an errand! The puppies loaded up into the trailer again without a fuss, and I rolled us all over to Sprouts next door and reattached the lock. I hurried inside to grab the few things we'd need: hot dogs, buns, and also a gallon of milk. At the checkout register I didn't hear a Beagle trying to impersonate a torture victim, so I was happy.
The father and brother to my roommate were taking advantage of the holiday to visit Sprouts too! They said hi to Grunt and Jackjack on their way out to the truck, it was neat to run into them.
Observation: I love Sprouts. It must be my favorite grocery store. They carry milk in nifty jugs with handles so your hands don't get cold, and you return them to get a deposit back. If you subtract that deposit from the high price, it is delicious milk, and it's even cheaper than regular milk. Win/win! Of course ther bulk bins make me drool every time I walk in- it's like being in a giant candy store except the candy is almost all stuff that is good for you! I'll stop there because I could go on and on. Just trust me- you have to visit a Sprouts if there is one in your area.
We had a lovely ride back- Grunt wasn't quite as whiny about it on the way home. I'll consider that to be a great sign for trips to come. 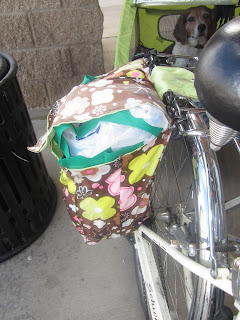 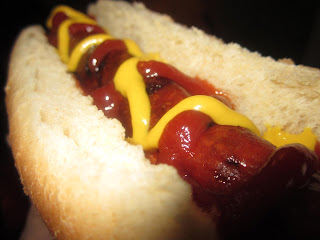 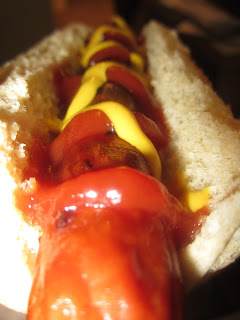 Grunt had forgotten about his toy the second after he picked it out, so I enjoyed letting Jamie "surprise" him with it when he got home from work.
I think our second errand trip was a wonderful success- and it completely worked to banish my bad mood too!