I'm saying it early, because at the actual countdown later tonight, I'm going to be watching movies with our roommate's family. While curled up on a couch or chair, I'll also be stuffing my face with buffalo chicken dip on homemade chips.

These are the best chips ever. Want to know how to make them? Alton Brown showed us how on Good Eats, which might be my favorite television show. It ranks way up there with House, Firefly, and NCIS. Anyway, here you go, with pictures!

also frying oil, a pan, and a stove

Start heating the oil in the pan. Jamie said to set it on 6 for us, which is just over medium I guess. You might need to test the oil later to see if it's hot enough.
Mix your acidic tasty juice of choice with lots of salt. This mixture makes sure your chips are tasty and not just crunchy pieces of cardboard.
Cut your tortillas into quarters- that makes nice large chips.
You'll dip the tortilla pieces in the juice and shake off the extra liquid. Lay them out to dry a little and soak up the goodness. A plate worked well because the edge was raised- extra liquid ran down a little.
After a minute, put the flavored tortillas in the oil. Flip them when the edges start to color, and remove them when a tasty golden color. Cool and enjoy! My workstation. The stove is to the left, the stack of tortillas to the right. 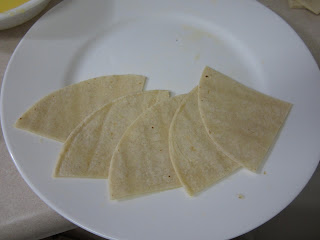 Wet tortillas laid on a plate to rest. Liquid + hot oil = BAD. This plate gets moved around, being held closer to the oil or juice as needed so that I don't tear up the tortillas with my tongs. 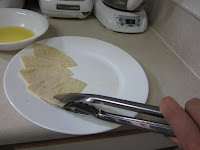 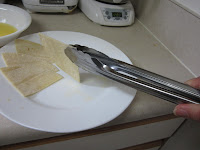 To minimize scary and sometimes painful oil splatters, I used the tongs to pick up the tortilla piece and tap the corner that was in the center of the plate (the wettest part) to get off that extra juice. Then into the frying pan! 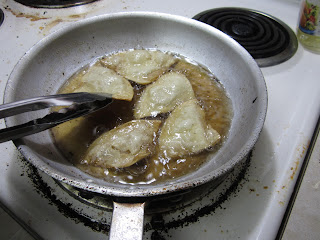 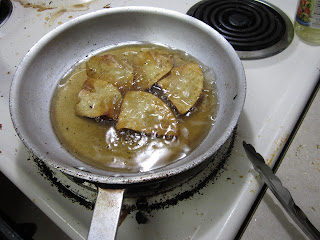 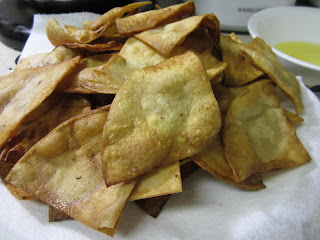 It becomes a pretty seamless continual process.
I was putting the rested tortillas into the oil, dipping new tortillas into the juice and laying them out, just as the frying chips were ready to flip. Then I was monitoring color until they were done. Remove the done chips and repeat!

These chips taste better in my opinion than the ones you can buy in a supermarket. They are crunchier and stronger for dips. Dunking them in the salty juice mixture also means that while they taste good and salty, your fingers stay much cleaner than if you were eating chips from the store crusted with salt.

Have fun and be careful tonight!