Last Day of School (and what I've been sewing!)

Today is it: the last day of school. I'm free for the summer. This should make me nothing but happy, but instead there is a mixture of excitement and sadness.

I'm excited to be closer to the date of our move to Colorado, to my dad showing up in his truck and getting here just in time for a great big Father's Day hug. I can't wait to see whatever new house we end up in (they all are awesome, even if after a short while the novelty of a new place wears off), and to meet new people who might become friends.

But then I'm sad at the same time, because I have great friends here.

I have Tig, who let us live with her for nearly an entire year, not to mention making sure our furbabies were always taken care of. She never gets tired of animal questions. She is always ready to hop on a bike with me and go to the park, even if she's already been awake and at work for 16 hours saving the critters.

Then I have the wonderful people at work, one in particular. She started my bus every winter morning to let it warm up for me, gave me rides home even when my stubbornness would have had me biking home in less-than-ideal conditions. She cared for Pascal, the little gummy lizard which showed up in my window one morning (named for the chameleon in the Disney movie Tangled). My bus-neighbor had found it while sweeping and set it there. Pascal got named, and promptly became a major character in my work life. M would start my bus, and set Pascal somewhere for me to find. Before I had really discovered this game, he leaped out at me from high up in the overhead first-aid kit while I was driving along. That was the only time he really made me jump, because then I knew to look for him.

Pascal showed up on turn signals, intercom mics, the steering wheel, the seat belt, once the student mirror and once the sun visor. His game of hide-and-seek made my mornings fun, and kept my pre-trips more diligent (hadn't actually checked the seal on that first-aid kit in a while). 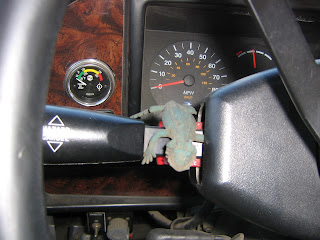 When M stopped starting my bus for me, I started hiding Pascal in her bus. Every afternoon I'd stop by on my way past and put him in a new spot. I confess that I reused some of the ones I'd found him in. Then one day I couldn't find him in her bus, so Pascal took a break.

Today, M gave me dirty, floppy, and sentimental Pascal. She extracted from me the promise to relate his future travels, including the one where he moves to Colorado with me. He also must get a bath. I shall have to wash him gingerly, as he is not a young lizard- he was treated harshly by whatever student had him before he found his way to me.

So check back for the story of Pascal And His Travels!

I will miss my friends, coworkers, and boss, but life goes on, and I hope to find other good people where I'm going. I'm sure I will.

Today on my last day of work, my students behaved (for the most part), and I felt really good in general. I wore a new skirt created from the scraps of corduroy used to make the curtain in Astral Games. The strip was several yards long, but only about a foot wide. I had to piece together fabric in order to make the pieces the pattern required. The result is a heavy brown skirt with a flounce on the bottom, and pockets that I already love. I wore the skirt with my favorite shirt of multiple colors, one of which is orange. So I put on the tights I own which happen to be an autumn orange color, and wore my boots. Here is the photo promised on Facebook: 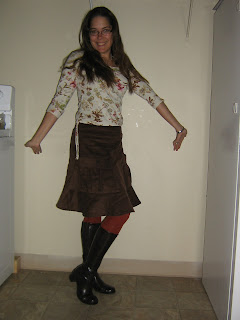 I was so excited to have the skirt nearly done, that finding out I did not actually have the zipper I thought I did didn't faze me. This is secured with a safety pin. The zipper was installed before my afternoon run.
See the pattern I used HERE. Simplicity 2655.

I also wore my newly-covered helmet, which makes me ridiculously happy. Now it isn't some weird non-matching baby blue color, but has the same colors which my streamers were made to match. The dark green seems to be very similar in shade to the crate, windbreaker, and trailer I have. I'm not sure yet if I'll add the holes, ones in the back weren't fantastic, and so far airflow isn't an issue anyway. 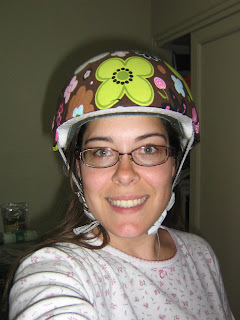 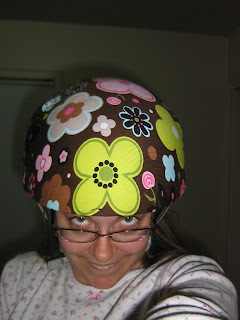 While at JoAnn Fabric for the zipper I needed, I grabbed a zipper to replace the one utterly failing in my green windbreaker, and found out that the waterproof breathable PUL fabric I was ogling earlier had gone on sale. Babyville Boutique is the brand, and it is Polyurethane-Laminated fabric for making diaper covers and other baby stuff where you really don't want that moisture touching you. I bought 3 yards, and it will become lining for panniers (bicycle bags) made from the same fabric on my helmet. I won't need the crate bungied to the rear rack anymore unless I want it there.

So the next week shall see me packing, and perhaps sewing this last project. A square shape should be ease itself after clothing- I'm sure I'll get those done one afternoon when I realize that I really have nothing better to do (except pack up the craft stuff).

Tomorrow I'm sleeping in! Have an early Happy Friday from me :)