A thought occurred to me one of the past few days:

When I was in school, one of the "required electives" was Critical Thinking. It turned out to be a very fun class actually, but only because of my teacher, Mrs. Rzepkowski (the R is silent). We learned about job interviews, check-writing, and other important skills, but laced in with all of that were all kinds of puzzles and activities. I remember picture puzzles, where a solution might be "the plot thickens" but your puzzle was simply the word "plot" with the letters written from a skinny P to a fat T. I remember being petrified when my turn came for that mock interview. Somehow, I was complimented as being one of the most cool and poised "employees" so far.

That might be one of my favorite classes of all time.

Mrs. Rzepkowski gave out awards at the end of the year, I think. Simple bright paper cards with glittered squiggly borders outlining a declaration of some kind that pertained to you. Everyone got an award, but they weren't at all stupid or bland for there being so many given. I believe now that she thought long and hard about the qualities of each person she wrote a card for. I was extremely surprised and a bit confused by my award, though, at the time. Mine was a bright neon orange card pendant hung on the yarn string necklace, with orange metallic glitter in a zigzag around the words "Marches to the Beat of a Different Drummer."

Yesterday, that memory of receiving my award came to me, and I think I finally understood, and was very proud to have gotten it.


This month, as I've mentioned previously, is National Bike Month. I did my best to promote and organize the event for the county school bus shop. I posted all sorts of material, but no one noticed it, or was confused about what it was (I thought I had labeled everything pretty obviously, but meh). I ended up putting a flier on the mailboxes, where I hate to see stuff taped, because it blocks the mailboxes of whomever the sign is taped over. That got a bit of interest last week, I spoke to some people who already commuted by bike, and a few who lived nearby. Then, I got the bright idea, belatedly, to put forms into EACH mailbox, with options to share addresses (for mapping purposes) and check boxes on whether or not that person planned to ride, morning or afternoon, and would they be interested in riding in a group? I also included newly-acquired information about bike rentals from our local shop, and again mentioned the sign-up sheets for food, and/or rescue services.

Well, the sign-up sheets remained blank, and I got back 6 of the 50ish forms, all with checks marked for not riding a bike this week. I was depressed about my efforts.

Monday, I got up early and pedaled to the bus shop, where I set up the four dingy abused cones I had asked about previously with a bright colorful paper-link chain. This barrier marked off the area right outside the office doors where bicycles could be parked, and the cars would be pushed back just a bit in their usual spots to give the bikes room along the building wall.

When I finished with that, I finally went inside, and look what I found parked in Zoomie's usual spot! 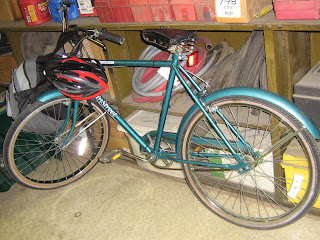 This is an area next to a counter in the mechanic storage room. The bike has 3 speeds. He wore a helmet, and carried a full backpack (what's in there, I wonder?) with a red blinking light attached to it.


An older driver with a nice soft voice rode this in, and he arrived earlier than me. I was so thrilled! All that planning and such, and I managed to get ONE extra person to ride to work! In the morning, even. Success! His way home is mostly uphill, he said. So he came back that afternoon with this bike instead. 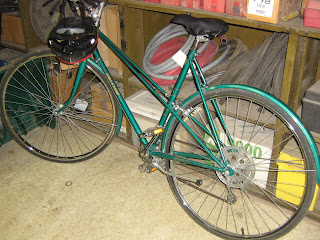 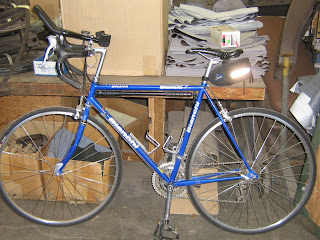 This bike belongs to one of our mechanics. He has been riding regularly since the weather got nice. Of course he also rode in like me this week.

I must not have gotten a photograph with my camera of our other regular commuter bicycle. That driver comes in very early, and offered to ride together at the beginning of the year. I was too new at the time to commuting, and thought I might embarrass myself, so I declined. I'll get a photo of her neat bicycle soon.

I had a field trip with several other drivers to take multiple school groups to see a play at the theatre. I got to take a group from my own elementary, which always makes me happy. We arrived and the kids unloaded, and after I parked I was on my way to have brunch with the other drivers when I noticed a ton of bicycles parked haphazardly in a few parking spaces for the theatre. One man was sitting on the curb with them, since none of the bikes were locked to anything.

They came from my school! The very same elementary school that I had just driven 39 people from, also had a group of students riding to the theatre. How cool is that?! There were a lot of red Giant brand bikes too, I think those might belong to the school and have been borrowed for that ride? 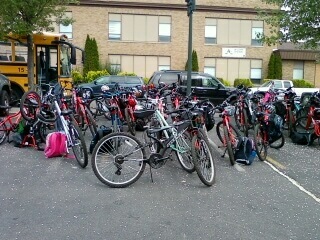 I just HAD to take a picture. Courtesy of my Samsung Reclaim.

Coming back from brunch, we passed this bike. This has to be the best bike lock ever! 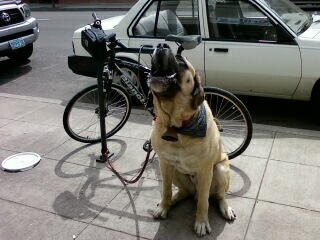 Clifford, an English Mastiff- St. Bernard cross, lets out a tiny howl as his owner asks him to pose for the picture. He got a piece of chicken from my salad and lots of pets. I want one!

Later that afternoon, I was sitting outside in the shade, eating the rest of my salad and enjoying the weather, when a bright shiny red Giant pulls up! This was a driver friend who has a heart condition where it beats higher than usual all the time, but she made it! I can't tell you how I cheered. Her bike is from the local shop and is as shiny as new (it sort of is), built specially to accommodate her knee and previous back issues. She rode 3.3 miles to work, and I'm so proud of her!

My friend came up as we were talking about her bike and told us that a third driver was just coming up the hill, and we should cheer him on. So, I ran up the driveway and did exactly that. He was pedaling ever-so-slowly but surely up the hill along the sidewalk. 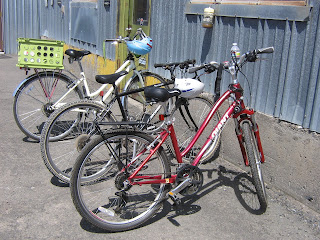 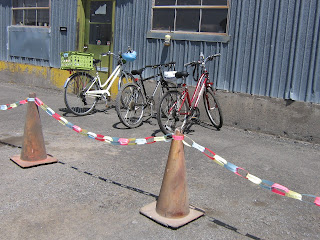 With the colorful paper chain. 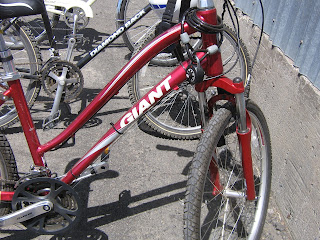 I rode home with the female driver. We weren't side by side, but at times I broke single file rank to put my front wheel right next to her rear one, to make traffic travel a little bit farther from us. I never obstructed the flow of cars, but our office lady mentioned it this morning and it sounded like she hadn't been happy with our arrangement.

We made it to her house just fine, and we spent some time talking about birds. Her back yard is full of all different kinds. The black birds I like with bright orange shoulders are called Red-Wing Blackbirds (apparently it's not orange, hehe). There is also a Tri-colored Blackbird with white under the red spot, instead of yellow. By the time I got back out to Zoomie, which was only a few minutes, her rear tire was completely flat. I attempted to repair it by just pulling out the bit with the puncture in it. The hole made a hissing noise and was pretty easy to find, but my patch didn't hold. We put Zoomie is time out strapped to my co-worker's jeep, and she drove me the rest of the way home. 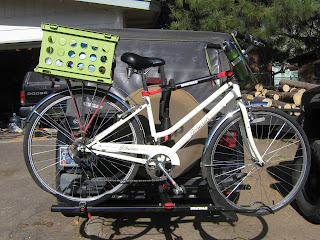 Another guy driver who services my elementary school just in front of me in the afternoon line-up rode this one in to work this morning. He had filled out and returned his bike form with the not-riding box checked. Guess he changed his mind! 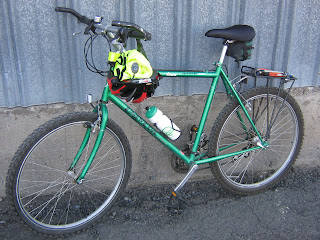 On the way home after this morning's route, I helped a cyclist who had been sitting in the shade of a tree with his bike on it's side. I said good morning as I passed, which is common, as I say hi or good morning to everyone. Something made me pause, and then finally turn back around and ask if he was just resting, or if he needed any help. He originally said resting, but then admitted to having a flat tire. I had just gotten a new patch kit, so I supplied all the things needed to fix his tire- multitool to remove the wheel, lever to unmount the tire, patch and rubber cement, and frame-size air pump. One of his previous patches, a green one, had failed. I tried to take it off, but it seemed stuck pretty good, and we ended up putting the new patch right over the side of that one, where air was seeping out. The man is one of the breakfast club I see eating nearly every morning at the yellow train car on display next to the bike path. His bike was blue. I felt really good about the whole thing, but between Zoomie yesterday and this repair today, I need a new patch kit again!


* not the chaotic and loud motorcycle event of Daytona Beach, FL.
Posted by Red-Eyed Tree Froggy at 12:20 PM