A Happy Day for more than Mothers

Today was a lovely day for me, and I'm not even one of the mothers being worshiped.

I texted my own mom several states away, expecting her to be asleep at midnight this morning. Instead she replied back, so I got the first "Happy Mother's Day" in. I arranged to have my dad get her daisies, her favorite flower, and some bubble bath so she could hopefully enjoy some time for herself. It won't be quite as wonderful as a bubble bath in that huge claw-foot tub growing up, but hopefully just as relaxing. Thank you, dad, for doing that for me.

My friend Tig is a mom, as well as several other females in her family, so we all met up at a local park to have a general celebration get-together. There was cake and ice cream, cards and flowers. Jamie and I rode our bikes with Tig from our house to the park, which was a very nice ride. Her daughter Marty loves the baby seat which has been recently attached. She doesn't object to it at all, where she used to have a very hard time being convinced that it was ok to be away from mom riding in the bike trailer behind me. 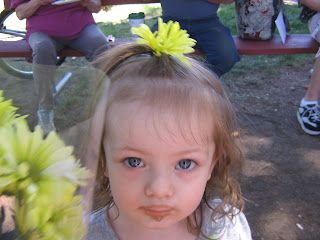 Even blurry (my camera hated me very much today) this picture was too cute not to post. 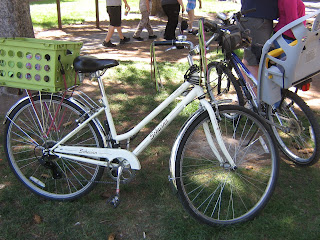 Zoomie with Tig's bike, hanging out at the park.

After cake and ice cream and a game of Go for the boys, we decided to go to a different park to play frisbee golf. All three of us continued our bikey traveling. Marty took a short nap in her little chair. We got to the park much sooner than either of the other two vehicles, so we doubled back and rode in circles at the nearby high school track. 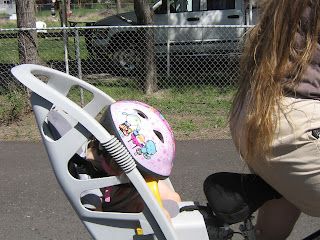 Not the most comfortable-looking way to sleep, but it sure beats the cranky baby alternative.

We had a great time playing frisbee golf and generally chit-chatting some more. One of the cars had been delayed because they decided that chips and cake do not a true meal make, and they stopped for fried chicken. I ate two legs- still my favorite pieces of the bird.

It didn't take long to decide that we'd had enough of parks, and so the family decided to go ahead with the next portion of the plan- dinner. We were still invited, but by this time Tig was ready to hang up her bike and ride in the car. Her frisbee golf game involved double movements as she kept retrieving Marty, or sometimes threw her disc with the handicap (a perfectly desirable one) of Marty perched on her hip. My water bottle got plenty of use as it was passed around for everyone, and it was refilled often from the bathroom faucets. Our water fountains have not been turned back on yet from winter shutoff.

Jamie and I rode down the bike path to downtown. We decided to explore part of the path we've never been to- west of Walmart. Past Walmart it shortly ends into what looks like a dirt and gravel service road. There is another rail car fenced off, though not meant to be very visible, as it was in poor condition with plywood over the window-holes. We followed the roadway across those unused tracks all the way to the actual train yard. Then we turned right along the edge of the yard, and found an exit after going under the bride of the main roadway.

Jamie's mountain bike with front and rear suspension really shined on this part of our ride, because he wasn't bothered at all by the rough terrain which made Zoomie really shake and rattle. However, I had no trouble keeping up, I was just vibrated more than he was.

We did a loop back around and crossed that bridge which we had just ridden under. The hill itself wasn't bad at all, but we discovered that Vandal had an improperly adjusted limit screw on his derailleur- his chain popped off a few times until we found out why. Going uphill isn't a particularly good time for the pedals to jerk and stop with weight behind them, and Jamie wasn't happy at all to have his newly-recovered ankle stressed like that. But finally we got back on our way, and downhill was really fast and fun without traffic to worry us. We got to the restaurant after everyone else, this time, but just barely.

Thai Orchid is the name of the place we ate. Blue, Jamie's mom's boyfriend and our roommate, has declared that Thai tea is now his favorite drink, replacing chai latte, which we shared as favorite previously. I still prefer chai. I think Thai tea is simply tea with sweetened coconut milk added to it, but it is a very close rival to chai in deliciousness. We had several people drinking it and asking for refills, so we eventually earned the right to a whole carafe of it!

Everyone ordered something different, and we passed around plates full of all kinds of delicious foods. There was Pad Thai, of course, plus a noodley stir fry, a green curry dish, a clay pot with rice and meats, a creamy delicious soup, something with eggplant, another dish with ginger (don't eat the ginger stalks, they will "punch you in the face"), beef and brocoli, and some others I'm sure I'm forgetting. Everyone had something they liked. After we were pretty well stuffed, the waiter brought out fresh watermelon, which was the perfect ending in my opinion. All the food felt really healthy to eat, being all meat and vegetables. I'm not sure if it truly was, and drinking that tea wasn't a healthy choice, but I wasn't concerned about that at all. I felt really really good. 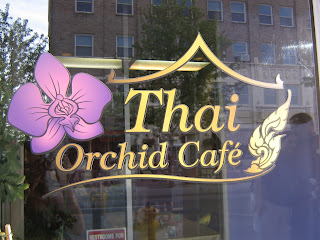 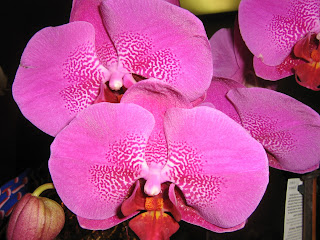 (I had to get pictures of the flowers for you, Rayv.) 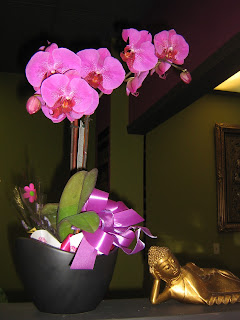 While Tig and her family departed to continue their festivities with her mom's favorite movie watched back at home, Jamie and I coasted over to the game store near the restaurant. Jamie got some more Magic cards, and then we pedaled back home. Our puppies were very happy to see us.
Posted by Red-Eyed Tree Froggy at 9:39 PM