The end of this week was pretty cool.

Friday, I was asked to do a field trip to take a football team to another school nearby for an away game. I got there on time, but the coach had me go around the back of the school so the players could load their gear easier. It took forever. People apparently do not know how to pack into spaces. I helped load some things like Gatorade buckets. The players said I was awesome at that point. As they started to get sort of blank stared about how to fit things, I directed smaller items under seats, had bags of pads stacked higher, and asked a couple players to hold their smaller bags of pads in their laps in order to set the Gatorade in their seats next to them. I have undercarriage storage, but for some reason the coaches declined those. Finally we left the school, and I knew I would be late for my afternoon run.

The coaches were impressed with the way I swung through the parking lot. Really I was not taking any undue risks near the parked cars, but I'm sure it looks more impressive from a passenger position when the mirrors aren't showing them exactly what I can see from the driver's seat. I squeezed through the corner with no issues and the gate which was not all the way open without a problem. I don't think many drivers here actually do the field trip emergency script, because while I was using the PA system to go through emergency exits and such, the players were still making the occasional positive comment and at one point a coach acted the game show model or steward, pointing to the exits for me as I called them out. After that, however, the coaches demanded silence from the players. I get the impression that they can frequently get out of hand and test the patience of the adults. I hope I helped keep the mood light by ending the little speech with a comment along the lines of, " now the coaches have asked for silence, so save your energy for the butt-kicking you're about to do on the field."

Anyway, we got there fine, and I got to see a new part of town called the Foothills. I did end up calling over the radio to say I would be late, but as they took more time to unload, I asked if any other buses could get my students. I believe bossman hopped in a bus to get them. Frankly, I'm not sorry I didn't take them home, with their bad attitudes. I'd rather take enthusiastic and appreciative football teams to games every day.


Jamie fixed my kick stand for me. We don't have an allen key or hex-thingy big enough, so he used a flat-headed screw driver to tighten the bolt for it. He also tightened my handlebars. They decided to scare me while I was launching from a stop sign by falling down to a lower angle. I was turning left in front of a car, and while I had plenty of room, the surprise caused me to suddenly fear that the car would be on me sooner than I thought and I had the fear for a split second when that bar moved that whatever had just happened would make me wreck in front of it. I didn't, of course, and figured out which piece had moved pretty quickly. I yanked it back up once I was straightened out.

The wind! It is awful when I leave the house for my afternoon runs lately. I think I need to add 10 minutes, although it may only be five that I need, so that I don't feel like I have to fight so hard against it. I very nearly got off the bike and walked on Friday. The reason I didn't was due mostly to pride. I was able to ride up the hill to the bus shop to my surprise the first day of my commute, and I know I can do it. I also had a woman getting in her car at the base of the hill who smiled at me when I waved at her like I wave at everyone I see. I didn't want her to see me get off the bike. So I didn't.

The seasons are definitely changing here. I don't really see any bright oranges or scarlets on any trees, but there are lots of yellow leaves starting to fill the curbsides.

It was a clear pretty morning. 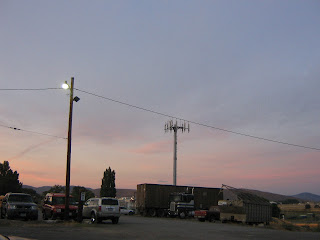 And I saw geese abandoning us for the south! 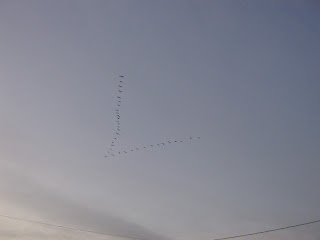 I love Halloween, and the residents here decided not to wait until October first to display their holiday spirit. First Halloween house! I especially like the orange skeleton crawling from the grave and the angelic one sitting  under the window. 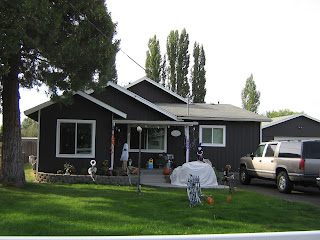 The day ended really great as well. Still windy, but not quite such a opposing force as earlier. I made it home slightly early for not having my afternoon route, to find that the car wasn't there. I texted Jamie and asked where he was, and he replied Aftershock, with the guys from work. Today was their last day on the cabling contract for the air base. I found out that Aftershock was the restaurant and bar at the bowling alley, so I asked if he would like me to ride over and drive him home. He said yes, and I said yay!

So I rode over to the bowling alley, which is very close to work, but on a different road. Reading about railroad tracks on several different forums and blogs, I was very careful to cross them directly perpendicular, and the car right behind me didn't seem to mind at all when I had to zig across the lane. Perhaps because I checked behind and signaled pretty early to let her know what was going on. Drivers here are generally very polite to me. Maybe it's the streamers.

I got a free rootbeer from Jamie's coworker, listened to some cool music while we talked, and then Jamie and I went to dinner at a mexican place after some goodbyes. A quick stop back tot he house, and they we promptly turned back around to get Jamie some video games, since he was seriously missing some Playstation action and all his games were old. He traded them in and got Infamous and UFC. UFC is a fighting game based on the actual Ultimate Fighting Champion televised sport, and Infamous is about a guy that has electric powers and uses them for all sorts of cool things. That one is fun to watch. Once we got home I ate some icecream while watching some UFC and then we went to bed. It was a great day for me.