Of Ladybugs and Tires...

Monday was rainy and dreary ( I drove), but Tuesday morning was a great morning. 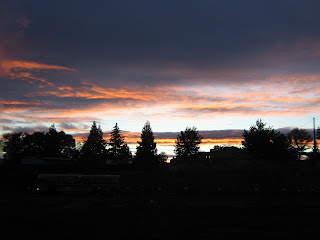 This was actually Oct 3, but yesterday was just like this picture.

It was cool but not cold, with a gorgeous sky and neat orange light. I got to wake up an hour later than usual due to a scheduled late start for schools. In addition to all that, I had company on my commute! 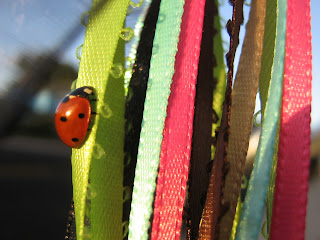 This little guy on my streamers made me think of my twin, of course. I was hoping the whole time that he wouldn't fall off and be lost miles from home. I was very happy when I got to work and there he was, still hanging on for dear life.
I drove my route, then came back to find him still there, probably scared stiff. He made it all the way back home too, where I lifted him off and onto a leaf. Now he has a crazy adventure story to tell all his ladybug pals. 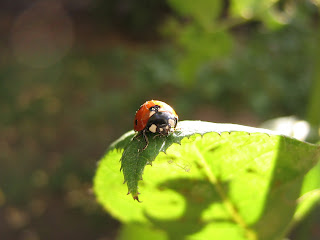 Today was cold at 31 degrees. I overdressed, but I was pretty comfortable anyway. I wore my thin girl's jeans, with those new soft flowered pajama pants underneath. I wore my ribbed green turtleneck shirt over my Danskin tank top. I love the way the fabric of the tank top hugs my middle and seems to keep it warm or cool. I wore my green striped knee socks and boots. I also had my windbreaker and the white hat under my helmet. The hat was really just to keep my ears warm, and I think if my head was more uncovered, I'd have been perfect. As it was, I unzipped my windbreaker right after starting, and tugged my turtleneck down looser. I started off with just my striped gloves, then due to chill I added the pink over them. My fingers felt colder somehow that way, so I rolled those back off. It was weird.

After driving the bus (twice- I got to hang around for quite a while wasting time and then take one really cute 3-year-old home), I got back to the shop to find my front tire flat! Actually, the mechanic saw it as I was rolling the bike out and having trouble with my kickstand again. It had come loose and was trying to dump my bike sideways when I was trying to shut the door behind me.

Instead, we rolled the bike back inside, and my bus-turned-bike mechanic fiddled with that annoying bolt. It took a minute to find the correct size allen wrench (8mm) because there is a tiny burr inside the hex. A hammer fixed that promptly. Kickstand tight, he then proceeded to add air to my tires after I checked and did not find anything sharp. I rode home in a great mood even though I was hungry.

The bus aide and I discussed restaurants on our drive, and he recommended a Wubba's brownie after I said that Casey's has awesome pie. So then of course I was not only hungry but craving brownies. Jamie completely indulged my request for lunch and we went to Wubba's with the puppies. Grunt and Jack waited patiently in the cool car while we ate. The waiter brought me this HUGE brownie that I would share with two other people. Instead, I had a take-home box with puppy treats (half a cheeseburger patty plus corn fritter and fries) and one for a brownie.

My front tire was flat when we got back home, so I drove to work. After my route, I drove to Walmart and got a $5 tube. Yay for cheap fixes! I did my first actual flat tire fix, which was easy being the front wheel with a quick release skewer. I was fumble-fingered, so it took longer than needed, plus I was in no particular rush. I needed a sensitive cheek to actually locate the air leaking out from an invisible hole. I still couldn't actually find it, even knowing where it was, so I dunked the tube section in the doggie pool. Bubbles!

I didn't find the cause, but there is a puncture hole on the tire tread opposite the tube stem. It doesn't show on the inside at all. Maybe it was one of those goathead thorns I was warned about at the bike shop? Could also have been a tiny glass piece, there are enough places that I called the county to ask for street sweepers. They haven't come yet.

In any case, new tube in, old tube patched with rubber cement stuck on my fingers, and voila! Good as new. Bike servicing is much easier than for a car! And cheaper. Next time I won't even have to buy a new tube, hopefully, if I did the patch right.

I received a call from a school today too. I go in for an interview 8am Friday (haha, no school that day for grades). I had asked about a paraprofessional position that I might be able to do in between morning and afternoon routes. Its actually at the same school I service, which is nice, and right down the road from the bus shop. If I get the job it will mean a larger steady check, rather than the uncertainty of substituting on random routes with the odd trip thrown in. Trips pay much better, but with them coming in sporadic bursts, I feel its more beneficial to me and Jamie to have a predictable income. My regular route is very short, which is not acceptable by itself as a career to pay bills with. I still feel slightly guilty that if I accept the job, I won't be able to help out at a moment's notice. Oh well.

What a great week so far.
Posted by Red-Eyed Tree Froggy at 7:14 PM