No, not an accident on my bicycle!

This weekend was mostly good, with a teeny bad part of this morning.

We decided to give the car its first Oregon bath before packing things up to go play D&D. Before now, the car would sometimes decide not to start. Usually, we were in a hurry to get home or in otherwise bad moods or something, and would get home and fail to look for a cause as to why the poor car had misbehaved.

Well, the heroic Caprice needed a jump from the Camaro that morning. 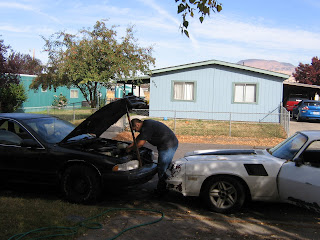 Then, it got some further tender loving care as we used our brand new sponges bought just for car-loving worked up some suds all on it. It got a nice scrub-down. Tire cleaner too!
Then we realized that the gauge was reading a low charge. Jamie found not only the wire connecting to the battery loose this time, but also the connection to the alternator itself. Now the car is all the way happy, yay! 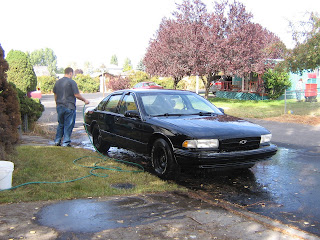 I am not particularly thrilled with the way the globe is shaping up. The two sections are taped together now, and it is decisively not sphere-shaped. Jamie assures me it will turn out just fine, but for now I skipped it to work on a more fun project. Suffice to say that one is complete in one evening. I have pictures, but it's a surprise! Soon, you shall see my handiwork, until then, sit in suspenseful suspense.

I created an Etsy account. I have nothing to sell yet, but Jamie thinks I should list my crafty things for sale on there. All hail FrogBeads, soon to be Etsy millionaire.

We tried Alton Brown's method of making beef jerky, where he uses furnace filters and a box fan instead of a  store-bought dehydrator. That way there is no heat to partially cook the jerky as its drying out. We ran into some trouble with this method. We had 4 filters, so three with meat and a fourth to cover the top layer. I personally think the meats were laid out too thick, contributing to lower airflow. There were some larger pieces instead of Alton's thin strips. Also, our jerky STUCK to the filters. Badly. I spent at least half an hour de-fuzzing the jerky. Because of the lower air flow than we expected, the jerky furthest out wasn't completely dried, and was sort of springy. Closer to the fan there was almost great jerky. Now we know for next time. I want to try again, Jamie is all for buying another dehydrator- it does seem to do the job faster, and Jamie loves jerky a lot.

And lastly, this morning's ickiness. I named this post car attack not only for the black car insisting on some attention, but I'm pretty sure a car is the ultimate reason to blame for my second flat bicycle tire. I swear, I checked the inside and outside of the tire thoroughly when I got the first one, however, I did not use the cotton ball trick mentioned on bikeforums.net. This is where you would use a cotton ball, notorious for getting caught on even the tiniest snags to make sure that the offending sharp was indeed gone from the tire. This way you wouldn't put a new tube in only to have it also punctured.

Well.... I put a new tube in only to have it also punctured. This time when I was searching, there was a plainly stabby teensy tiny wire sticking out. I had to get my tweezers to pull it out. It's 2/16 of an inch, if you're interested to know how small something has to be to put me in a bad mood for a Monday morning. (I also learned yet ANOTHER discrepancy between states- Oregon wants you to throw on your warning lights and open your door to mirror any bus you meet going the other way. In Florida this was a very bad no-no. I personally don't like having to open my door and getting cold, not to mention it feels unsafe to do it. I was not happy to learn that this morning.) Anyway, I think the wire came from a blown up car tire. Now the original tube is back on the bike and the replacement tube is patched and waiting in the wings.

OH! And my bus (ok so its not a car) hates me too. This morning I'm driving along, waiting for the heaters to wake up and do their job, when I get to around the 4th bus stop, and my gauge suddenly switches to the Voltmeter at just above 9. Not only did I get a heart attack because that was supposed to be reading fuel, but  I'm quickly loosing power. I call it in and the bus shop asks me to see if I can make the school. So I turn everything except outside lights off. Apparently the transmission is very much electric, because in a minute or so it shows a big fat filled-in digital zero instead of a happy 5, and lights up the ecomonic red button and big red Check Trans indicator. I am then driving along with even slower acceleration. I'm closing the door practically on student's heels to shut off the flashing lights and only pulling the parking brake- there is no shifting to neutral, because I'm afraid it wouldn't come out again even if it went in. We do make it to school, but it was a quieter ride than usual, with only a couple calls to "turn on the heat!" I also putter into the bus shop and find out that the transmission will do nothing but putter forward, so instead of parking I pull around front again and a mechanic takes over.

However, the day is not lost forever to the deepest depths of Monday hatred! Sunday was Boss' Day. One of our office ladies brought donuts. I had 3 chocolate frosted chocolate cake ones with Halloween sprinkles.

Then I felt better.
Posted by Red-Eyed Tree Froggy at 2:07 PM