Yesterday was a blast! I wanted to write and post pictures as soon as we got home, but I also wanted to play Warcraft, and I tend to make less sense when writing tired...

We celebrated Valath's birthday with a cookout at Malone. We and a ground of friends converged on the empty lake at 11 o'clock and stayed until the sun went down behind the mountain, around 6 or 7:30 I think. We had five or six coolers, a whole bunch of food, a $16 fail-propane-grill newly purchased from somewhere, and the ancient camping stove which replaced it. There were hotdogs, hamburger, brats, sausage. S'mores. Fruit, soda, tea, chips, cheese puffs.
We had a group of Jamie and I, Val and Tig, Tig's parents and two brothers plus a brothers-significant-other. We had Tig Aunt and Tig cousins, and a uniquely helpful Tig-friend that ended up being called a boyscout. This man supplied tools when Tig's dad forgot them for the dock- he had a demolition hammer, ratchets and sockets, all kinds of stuff. He had a blanket I wrapped in when it got cold. He had duct tape to repair Jamie's shoes when the dumb things started fantastically falling apart. One edge broke, then the other edge, then the other shoe copied it... it was like a revolt of the shoes or something. I made a sit-upon out of a snapple case and spent most of my time just hanging out without the camera. When the sun went down we went back to Tig's parent's house and had cake and more berries. 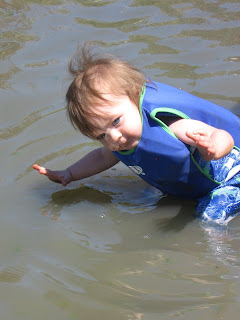 Marty. This is right before she fell forward into the water. She tends to want to dunk her face anyway, but apparently it is extra-scary when it happens unintentionally. Washed the berry juice off pretty well, though :) We decided she's still too small for the floaty jacket- she doesn't have enough bottom end to be a keel and keep it from floating her face-down. A little bit of cuddles and some daddy-gator fixed her right up for more splashing though. 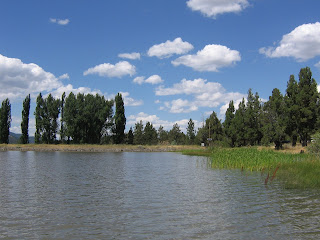 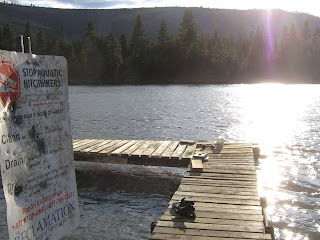 Dock! The sun was pretty... 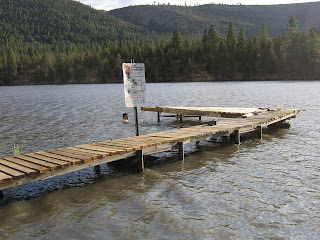 Almost finished dock! We've rebuilt the half by the shore, and the left L section. Tig's dad has a lumber mill, which is like a huge complicated upside-down table saw that takes a tree trunk and gives you boards- it's awesome. He supplied rough wood for us, and screws. (The drill died so the L isn't actually planked yet, have to finish up another trip.) 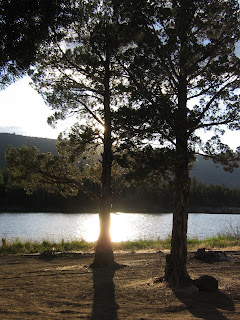 Two trees which gave us shade most of the day. Pretty sun. Don't leave me sun! It's cold without you and the skeeters came out to hunt... 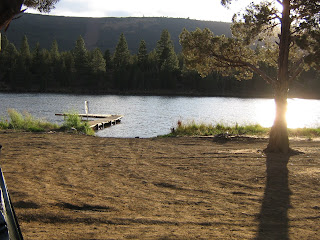 Tree with fixed dock. The other boat slope was taken so we had 2 groups come and put their boats in during the day, and one had to pull their boat out twice because it was really crooked. People like to ski out here and pull floaty-tubes and flip their girlfriends off in turns. It's funny. 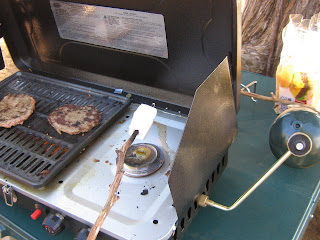 Cooking a marshmallow! Slowly.... Catch on fire already. (I did make sure to eat a hamburger before I had 2 s'mores.) 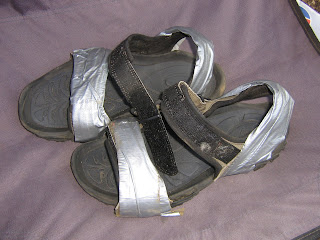 Shoe repair! Poor Jamie-feet. The strap broke and he took it off and set the shoe ont he dock, just in time to put his bare foot down and find a broken bottle with it. There is some broken glass down there, and sharp wires. People are smart to wear water shoes or flip-flops until we find them all.
One good thing: we noticed when we came out this time that there was no trash! As compared to previous visits. The sign had been muddied and executed by firing squad since our last visit, but the new dock boards also had shallow carvings saying "Malin boys love it" and some weird names, maybe. Most weren't recognizable due to weird unidentifiable letters, but one name was normal. I forget what it was. But several other tire-fire pits might have been cleaned up, plus some glass. We have helpers! One legless top-of-tree-trunk (like a half log) bench was missing, and the bench with legs had been moved from our previous fire circle to another location, next to a small pile of twigs and branches for fires. We added the board ends cut off from the dock to it.
I took pictures all around the lake, I had the thought to stitch them together into a panoramic like my mom did once with the farmhouse. Not sure how to accomplish that digitally, though. She just taped the prints together. I'll ask Jamie later.
Point of note: I made sure not to take Jamie's picture today because he doesn't like it. Then when I was going through them quickly last night, he asked if there were any of him. So from now on even though I have to chase people and sneak in shots, i'm getting them! Because I like pictures of people too, and sometimes I even get lucky and snap some good ones.
Our anniversary was a great day too! No pictures there, but Jamie took me out to breakfast at a neat castle-y diner called Elmer's. Inside was like a fancy Bob Evans. Biscuits and gravy weren't up to par, but I had hazelnut pancakes with marionberry (pretty sure its just blackberries?) syrup and chicken apple sausage and eggs. The sausage was really yummy too. Then after breakfast we drove around and explored a little by car, and then went to downtown. We visited the library and found out what it was like, we went to the bead store here and got some things. We walked all the shops and just generally window-shopped. We were going to have hotdogs for lunch but when we walked to it, it was closed. Our game store guy said they might still be at the little fair, and he pointed us instead to an awesome barbecue shack. It's a tiny building with a smoker out front. There's three guys in it and they make everything from scratch, pretty much. I had a luau sandwich, which is shredded pork, a jelly-like barbecue sauce that's delicious, and pineapple rings on a roll-thing that's better than a bun. It doesn't look that big, but you eat it and are full. After lunch we went to the movies. Their matinees are at noon! We missed those, but we saw captain America. No popcorn, since we were stuffed from Smokey Joe's.
Also, that you for the card! Of course Jamie thought the turtles on it were cute (ok I did, but he liked the card in guy-fashion) and it got here just in time! <3
Oh, and also Jamie is no longer kennelmaster. Somebody made up stuff about him and now he's job-hunting again. He filled out a huge questionnaire online to find a job with a restaurant. He was absolutely tickled (my words of course) that he could check off all the boxes of kitchen/restaurant skills except for baking and cake decorating.

Happy Monday.
Posted by Red-Eyed Tree Froggy at 10:22 AM