With two trips to work already logged, I can't count that as an errand anymore. Instead, we start off the bonus snow day of errand-running with more stops on the way in before afternoon route, just like yesterday. It worked so well, right?

Firstly, a trip to the bank- an actual real-life errand! I normally don't have any true errands to do on a bike- my miles are covered just going to and from work lately without any need to stop other places. I don't really spend money, and the weather is JUST starting to get nice. I'm out of the habit of riding just for enjoyment. But, a payment has to be made this month for my Beetle, and my husband knows I'm trying to run errands for this challenge. He is unwilling to leave the choice of toilet paper brand for the household up to my sole discretion, but this I can handle!

In the spirit of challenge with which rule #7 is written:

7. The Wild Card errand is for any trip you make that does not fall into any of the categories listed on the control card and you somehow cannot figure out how to fit into the Personal Care category.

I'm counting the bank errand under Personal Care! Here's why:

The car for which I am going to make a payment for is a 2007 gecko green New Beetle, named Sagra, purchased as a present for me last year during Spring Break (it's almost been a whole year!). Sagra is round. Sagra is green. Sagra has a sunroof. Sagra is a Beetle car, and most importantly of all, Sagra is MINE. Haircuts, massages, and manicure examples of the personal care category are all pampering activities which increase general happiness and feelings of well-being. Making the monthly car payment keeps Sagra in my possession, which is something that makes me very happy. Therefore, a trip to the bank is an errand in the Personal Care category.

Proof I was there: 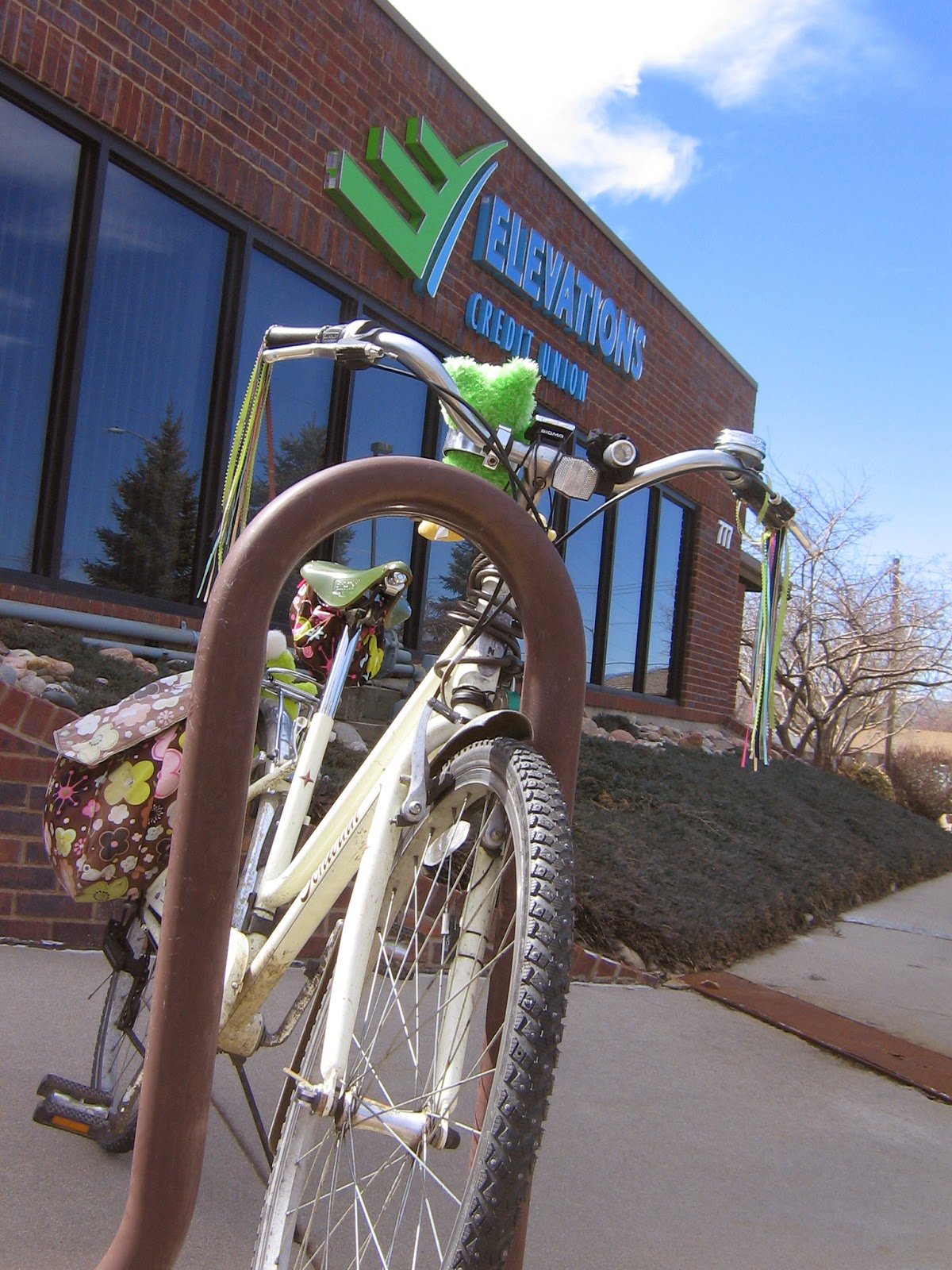 My observation for this errand occurred while pedaling the 2 miles to Elevations: the shorts that I so gleefully removed leggings out from underneath this morning (yay bare skin!!) are NOT, in fact, comfortable to bike in. At all. This leads me to my next errand- I decided I absolutely HAD to stop at Goodwill and buy a skirt to replace the awful shorts with.

Turns out, I got distracted before reaching Goodwill. Ace is someplace I hardly ever go, but I love it. They allow dogs inside. They carry all kinds of nifty things, from cooking gadgets, to gardening things, to hardware and car supplies. What's not to love? Did I mention they allow dogs? Anyway, Ace was on the side of the road I happened to be on, while Goodwill was on the opposite side. I decided to stop here before crossing the road. My idea was to look for green ratchet straps. There is a free table right by work, but I would need to strap it securely in order to transport it home. No getting by with an optimistic tie-job of borrowed twine. My goal therefore was to find ratchet straps. The likelihood of finding green ones is very remote- most are blue- and so a purchase, while I absolutely would have made one, was likely not going to happen here. 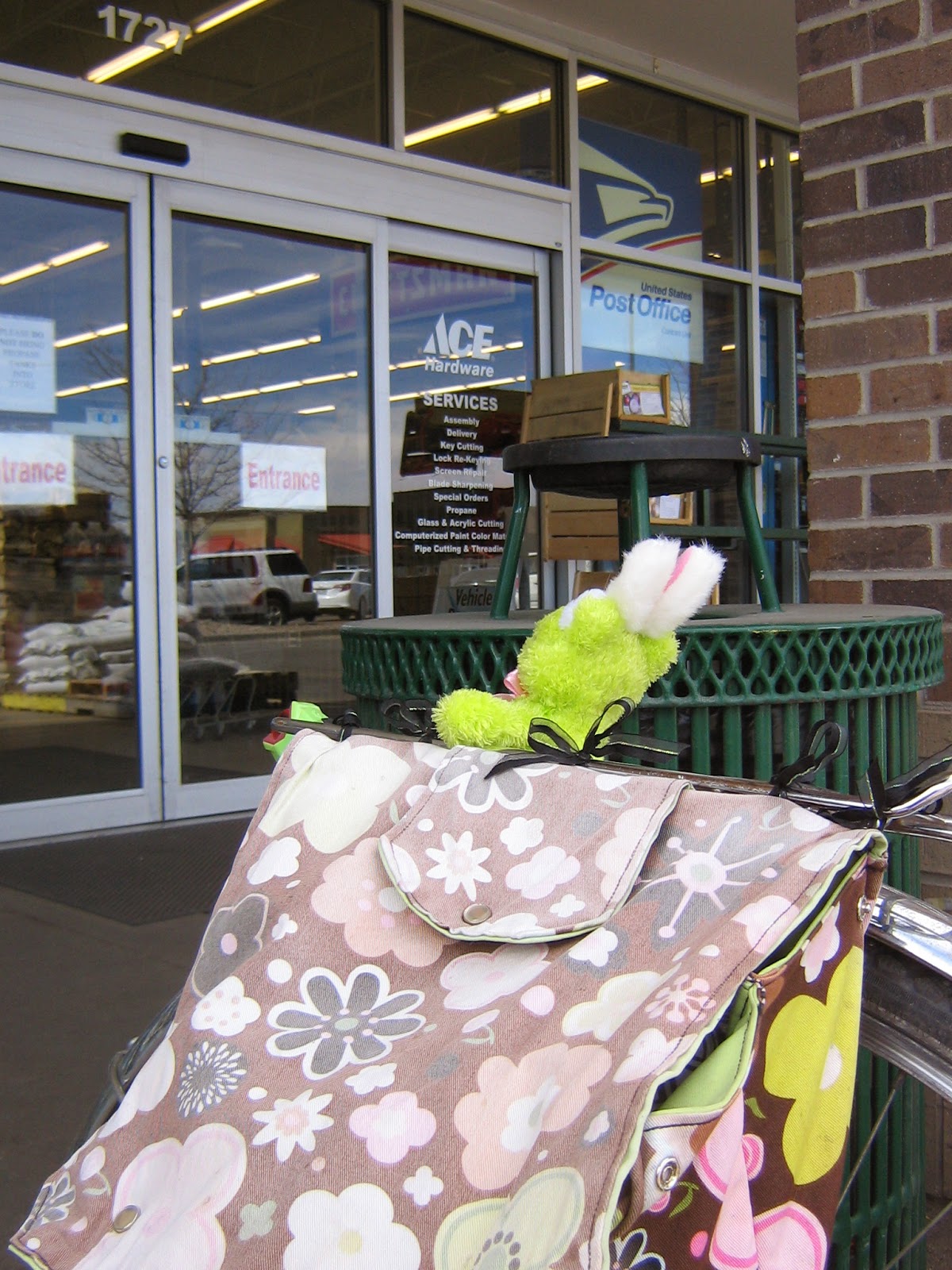 Now on to Goodwill!

Would you believe they had NO skirts? Yeah, neither would I. Instead, I did find skirts, but only one side of a small rack full, where most of the sizes hung were far too large for me. The ones I found in my size were all not suitable, being too short, too raggedy (like jean skirts), too slim to be worn immediately on a bike without modification, or just plain ugly. Observation: Goodwill has NO skirts for me to buy! I was very disappointed. 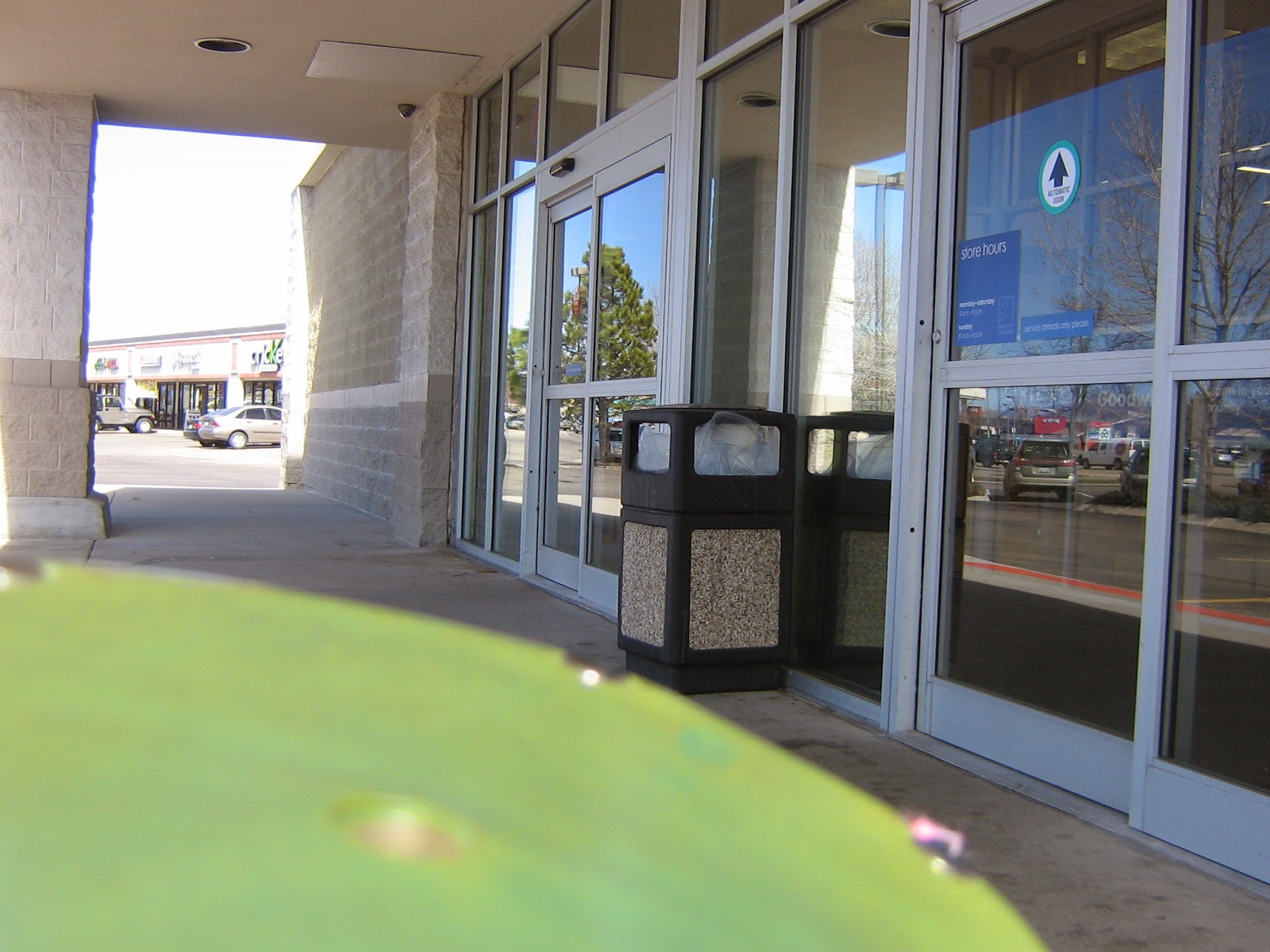 A very bad photo proving I was at Goodwill. My old camera has a very tiny screen that makes aiming difficult.
I'm counting the errand to Goodwill as Personal Care also. It would have been a MUCH more pleasant and comfortable day of biking if I had been able to find a skirt. As it was, I suffered somewhat through the rest of my pedally day. It was the opposite of a generally happy and feel-good day. I TRIED to care for myself personally, I just failed at it. If riding nude was not frowned upon in public, I might seriously have done so.  I was very much not comfortable on the bike.

A trip to Bike n Hike was on my agenda, an errand that I'd been looking forward to since I found out about the challenge. I love Bike n Hike, which is a good thing because it's the only really convenient bike shop around. Acme is nearby, but its small and seems to be aimed at a specific crowd. I just find Bike n Hike nicer overall. My goal in visiting this time was very specific: return some tubes that I'd purchased a long time ago, if they'd let me, in exchange for the amazing thorn-proof tubes that have been on Zoomie since... September 2012. I'm fairly certain there have been ZERO flat tires since I put those things on. Obviously, I wanted more magic tubies!

It turns out, I had quite a collection of tubes once I gathered them all together. I was able to do the exact trade I was hoping for and the spare money I've been carrying in my purse since... birthday? I think it was, made up the difference- just under $10.

One pair will go on the tandem. Jamie got upset enough when I got flat tires a couple years ago and had to call him to tell him I'd be late, I don't want to see how irritated he'd be if he's the one experiencing the flat. :P

I even managed to swap out for a thinner tubes in the thorn-proof version, which will go onto my new Free Spirit! 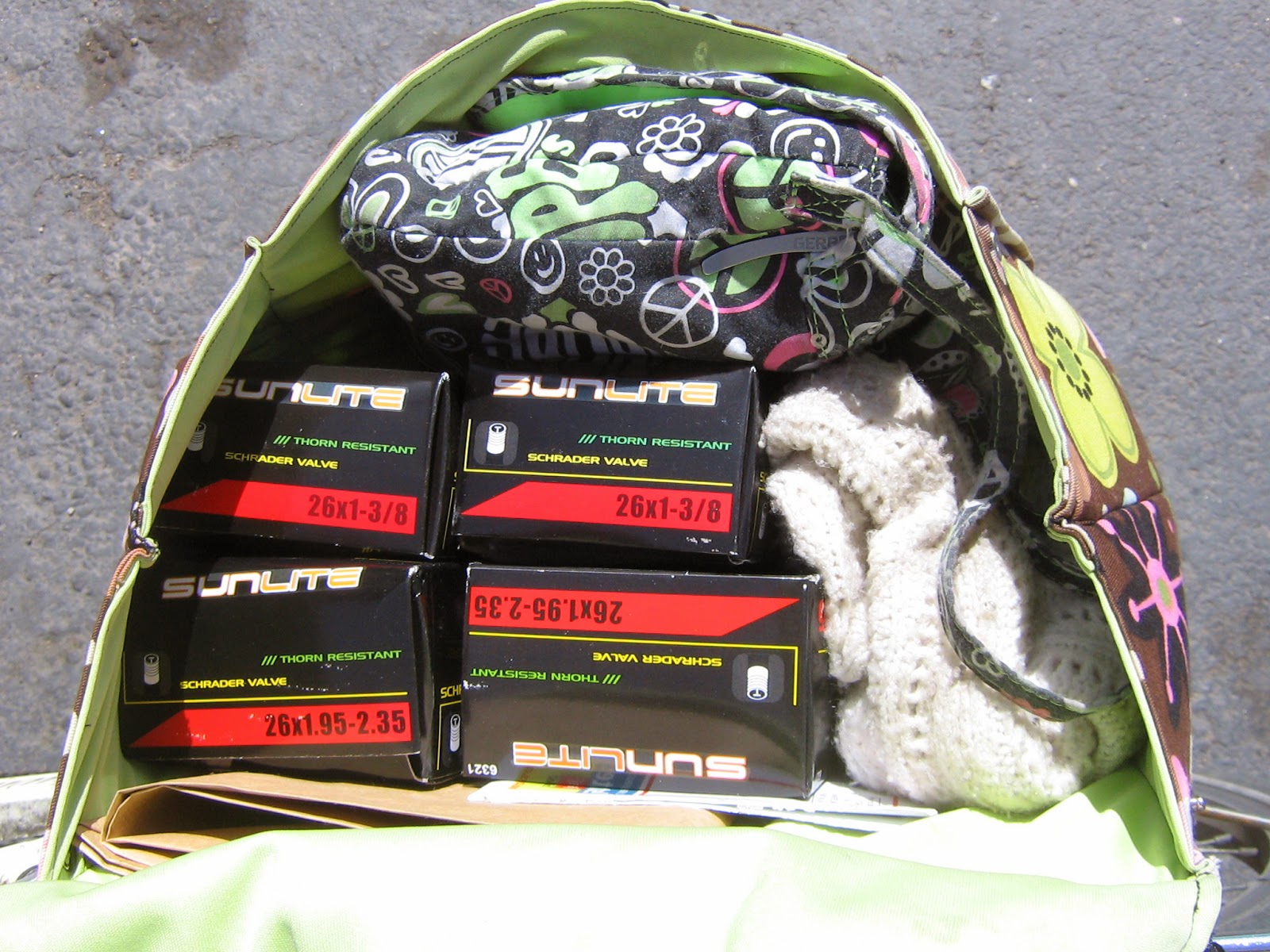 My saddle bag full of goodies. I love this thing! I made it and yet I still get amazed sometimes by the amount of stuff I can get crammed in there. My observation for the bike shop errand is a reminder of the giant amount of cargo space I have- the rear rack is still completely unused!

Lastly, my plan had been to stop by the library, but I realized that I simply did not have any time left before I needed to be at work. My plan changed into either having more tea at the office (lame cop-out, I know) or reading a few pages of a book there. I've been working my way through a book on the shelf VERY slowly during late start days when going home would mean pretty much turning right back around for the trip back to work.

The universe had a better idea for me.

I was quickly pedaling along Main Street on the wrong side. I didn't feel like waiting for a light to cross when it was likely that I'd hit a red light to do that eventually anyway. I zoomed past the Pumphouse restaurant. As I was rolling along, I went through the next intersection and promptly hit the brakes. A few moments later (I really need to fix those brakes) I came to a stop, dismounted and left Zoomie waiting for me on the corner to go and get a better look at the thing I'd just seen lying in the crosswalk. It was someone's purse.

I picked it up and looked around to see if anyone looked like they'd dropped anything, but there weren't very many people on that block. I opened up the little handbag to see if there was stuff inside. Yep! There was a fat little phone I could see and a bunch of papers, and definitely some cards. I was about to look for a driver's license when it occurred to me that it was a useless thing to do. Sure, I could find out who the purse belonged to- but then what? I didn't have the time to contact the purse's owner and meet them somewhere to give it to them, and I didn't want to just hang onto some stranger's belonging for a few hours while I went to drive a bus.

Then I remembered the police should be right around here somewhere. Sure enough, I got to 3rd Street and saw the familiar signs pointing to the library (which is why I remembered that I'd seen such signs before) and the police. I zoomed right up their cutely-painted bike rack and stepped inside without even taking off my helmet, I think.

There was a man at a window speaking with a lady behind glass. The other window had no customer, but also no person behind the counter either. I waited in line. After a moment, it was clear that the man was doing something which was going to take absolutely forever. I had to go to work!

I stepped to the side and waved an arm to catch the lady's attention and said "Excuse me" as politely as I could. She saw me and I pointed at the purse, at which point she interrupted the man who was going on about something so she could ask me what I needed. I'm pretty sure the guy had been being ornery, but I guess a nice "excuse me" works miracles because she smiled right back at me like I was the nicest person in the world and sent a second lady out the side door to see what I needed. I explained how and where I'd found the purse and this new lady told me I was a very nice person and they'd get it back to it's owner right away. I got to step right back outside and hop on Zoomie and I wasn't even late to work! 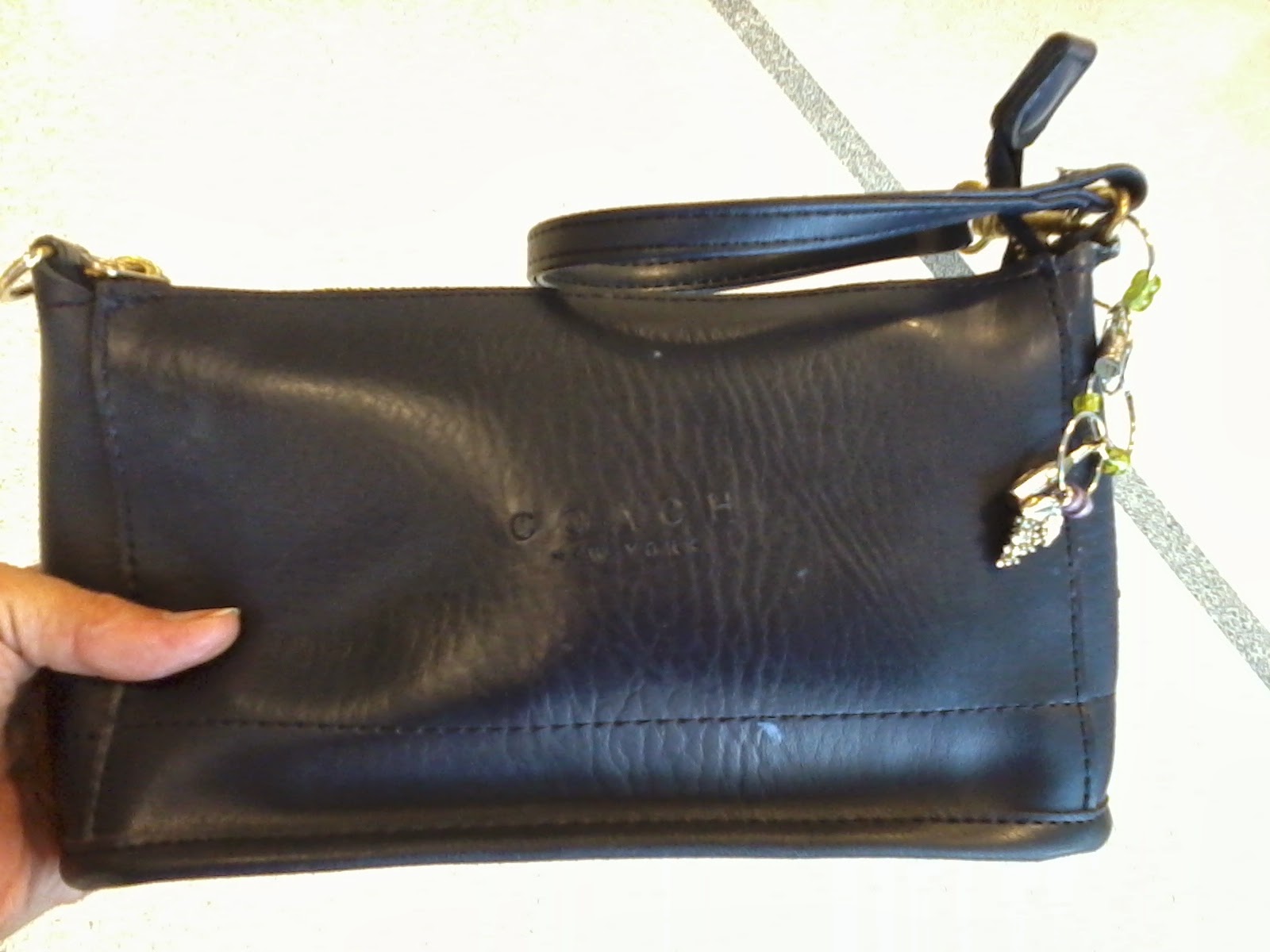 So my observation for this unplanned errand is that niceness goes a long way. It could help that I'm a tiny female wearing a happy flowered helmet too, but I like to think it was all in the smile and polite phrase.

This errand is going to count for a Wild Card, because I already used up 2 Personal Care errands. I WAS caring for someone's personal effects, though. So there :P I think that was a much better errand than pedaling to work and pretending like I went there just to read a book.

MISSION ACCOMPLISHED!
That was 12 errands. I used 8 categories and covered 35.2 miles total. I win the Errandonnee!
Posted by Red-Eyed Tree Froggy at 5:53 PM