Welcome Back To School

Last Friday, we had the welcome back gathering for our school district. I blame laziness to go and grab the phone cord for not posting about it earlier. Today happens to be the first day of school, so I shall combine events. They are related, anyhow.

Just like last year, I caught a bus ride to the school where the welcome back was being held. It was definitely interesting to bike to the terminal from this direction instead of from our old apartment. I don't know how google knows about it, but there an itty-bitty barbed-wire lined pass-through from a cul-de-sac to the train tracks, which you cross to get the the ponds and the Greeenway proper. On the way home afterwards I also discovered the hill which caused Jamie to curse very much through text messages to me the day he went to do drug testing. It IS quite difficult, because it is so long and pretty steep as well. I felt the lack of summertime pedaling, for sure.

But, it was entirely worth going to the event. Just like last year, I came home with a goodie bag full of stuff. It's like trick-or-treating, but with office knickknacks. 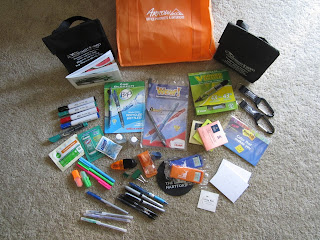 Look!
There are small handy bags, key clips with important phone numbers on patches sewn right on them for quick reference, sticky notes, pens galore, dry erase markers that are fantastic, hand sanitizer and wipes, and eyeglass kit and little bandaid containers, another little sticky dart man like last year's, another jar opener that is doomed to a life of serving as my drink coaster, tons of highlighters, and some clips. No magnets this year.

I'd like to submit my suggestion to the universe- please don't shove the most popular booth at the very end of a tight U-turn in the hallway! I'm not entirely sure who thought that would be a good idea, rather than just lining the hallway, but it created an intense hot human traffic jam. I always go counter-clockwise- as if I'm driving. You pass people on their right. But most other people were going left... and then of course they would stop dead in their tracks and gather up all the goodies from the booth. Then, they are stuck there by all the other people wanting to get to the booth, and they have to figure out a way to es-cah-pay!
Anyway- BAD IDEA.

The bandaids and hand sanitizer are already in little pouches behind my driver seat, and one of the black satchels is now hooked onto the swivel seat arm- it fits there perfectly and will collect lost and found items for me- such as the small tupperware I discovered today.

And now speaking of my bus!
It's an International, flat-nosed (transit type?), with the engine tucked up in it's face. I crawl over the engine cover hump to get into my seat, but its actually a wide low hump. It does not make me into a contortionist just to achieve a seated position.
If it follows me home can I keep it? 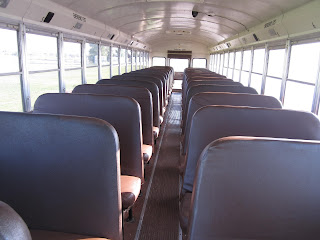 Brown seats.
Aren't they so warm and inviting compared to the dull depressing navy blue ones?
And I love the floor too, though it needs a good scrubbing to remove oldness dirt from nooks and crannies. 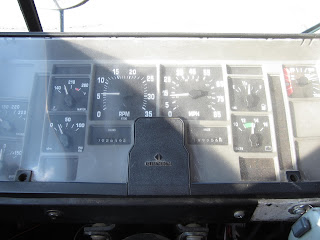 The dash cluster. I had to give it a good smack this afternoon- the speedometer thought it would be funny to snooze on the job.

This bus was NOT happy to get up so early in the morning. Took quite a bit of cranking and starting and sputter-dying before it would start and stay running. It seriously looked as though I'd have to get another bus, not for that issue. I didn't think I could reach the pedals! The seat does not seem to move forward very far at all, and I was very much concerned. But, after desperately wrenching on the lever and rocking violently, only to be rewarded with the barest smidge of dashward movement, I settled into the seat to check, and was surprised. My feet did touch the pedals. I experimented with the gas pedal. That might be doable, if I don't have to mash it down to attain highway speeds. I punched in the parking brake and set the bus to reverse. Hmm, I could stop the bus ok, it seemed (oh and good, the beeper works). So off I went, with no issues. The pedals have a nice ledge on them to keep my foot from slipping, maybe, which I like. 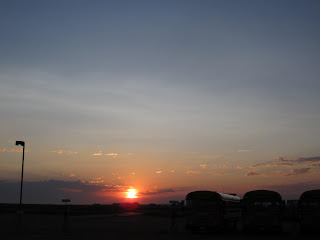 This morning as I walked out to do my pre-trip.

I managed to win one of 8 available routes up for bid between the welcome back and today, which meant I was doing brand new stuff, and in an area I was only vaguely familiar with. That is to say- I knew one road going north-south, which the terminal was on, and the two east-west roads that you needed to take to get to it from town.

I did my first school, a middle school, perfectly. I didn't miss a stop, I was on time to all of them, and no wrong turns. Then, there is an hour layover (OOH! built in paid time to scrub at the oldness dirt!) before I start picking up for my next school. Today I threw out all the broken pens, old meaningless papers, and accumulated dust in the bottom of the pouches in a slipcover behind the driver seat. I am now the proud owner of a packet of metallic star stickers, an envelope of bandaids, and a diabetic kit including a VERY rumpled diagram explaining symptoms, gloves, and a tube of cake gel. I need to verify whether or not it is still safe to keep, and turn in the slip with the student's name on it. The kit was from the 2009-2010 school year.

Oh, I was greeted at my first school with a doughnut, too. I thought that was awesome, and I chose one with chocolate frosting over a plain glazed one.

During my leisurely cleaning and organizing bout after I ate my doughnut, I managed to waste the whole hour. My next route looked simple enough, but I knew better. One road had a list of addresses down it, and I know from experience that those are generally royal pains in the behind to locate accurately the first time you're trying. Well, that part was hard, but what really got me were the road names. The county I was driving in is still growing. It used to be nothing but farmland, and then they had a numbered grid system, and then people started living there and didn't like nice easy numbers. So now you get roads like Birch/Silver Birch/County Road 11, and yet the directions say 11, and you drive past the Birch sign. Then you hit 13 and go "wait a SECOND!", and have to turn around and figure out what went wrong.

By this time (after you already missed one turn and are behind schedule) kids are out waiting for their bus (which you suspect is you) and you have to pass them, because you aren't supposed to pick them up yet. The parents pretty much confirm your suspicions by honking angrily when it's obvious that you are not intending to stop, and also yelling as you pass, while you can only hold up a hand in a gesture that you hope conveys both apology and a signal to wait patiently.

By the time I did get back to that road lined with angry parents, it was desolate. They'd driven their kids to school. I was fully expecting to get yelled at. But, in the grand scheme of things- kids got to school safely, if a bit late, and there were no collisions. It's a successful morning, though not in a great way.

This afternoon, I learned that the kids I have are most likely completely awesome (afternoons are always a better indicator than mornings). We started using the Zonar passes with mostly success. I'm sure for the first few days it will think that I'm abducting children- scanning on goes fine, but I'm almost positive a few students exited without scanning off before I remembered to run a litany of "remember to swipe your card as you step down" interspersed with happier goodbyes and such. Only one boy neglected to recognize his stop, and so a quick round-the-block got him to his driveway again only a couple minutes later than the rest.

I've hooked a really nifty rubbery tie thingy around the side visor so that the intercom is within reach. I've learned that I REALLY need to turn those fans around to aim them at me and not the windshield, because the cockpit of that bus is stifling. I'm really surprised, too, because it looks similar in design to most other buses I've driven, but somehow the air flow ignores the driver seat. So, I'll make my own airflow, with buzzing along with.

When I got back to the terminal, I got a mechanic to put new batteries in a dying flashlight, and I grabbed one of the few giant zucchini squash things that one of our drivers brought in. All the cucumbers disappeared. I jammed to a homemade CD entitled "Beetle Tunes" all the way home in rush hour traffic.

The first day of school is over, and I didn't ride my bike. That feels a little bit wrong (though driving my Beetle feels very right). Grunt and I shall go for a trip around the lake, I think.