I have been under a self-imposed laptop exile. My computer is a major distraction and time-sink. I could spend hours browsing useless and uninformative threads on forums, reading blog posts, and other equally unproductive things, if given half a chance.

So I put the computer away. I brought it out recently only for blog posting, then put it away again. One of these times of opening the lid on my computer made me believe that it was broken forever- the thing refused to go online. I took it as a blessing in disguise and put the thing away again.

However, I do use a computer more than I realized. I'm glad my laptop was only feeling ill that day, because I opened it up yesterday to find an email from the St Vrain School District, where I will be moving over the summer. After some back-and-forth, I have an interview set up for June 25th! Our actual move has been scheduled to occur the weekend of Friday June 15th. My dad will be driving to us with his truck to tow the black car back. The transmission is well and truly broken-it wasn't just a clogged filter as we'd hoped.

I also discovered the powerful motivating factor of background music. Because I was checking email regularly, I just set my computer on the floor on top of my sewing box, with the mouse being the only thing left on my plywood desktop. I listened to Pandora and would regularly like or dislike songs as they came on. I listen to Breaking Benjamin, Aaron Tippin ("Kiss This"), Skillet ("Hero"), Blue October, Creed, and Disturbed. I had Tool mixed in, but then the shuffle puts in entirely too much of the same type of slow music. Adding Aaron Tippin introduced a wonderful upbeat country vibe bit to mix things up a bit. 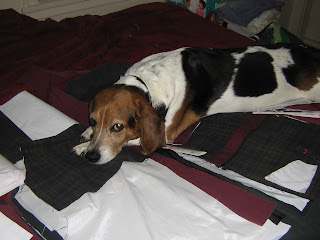 The good news is that staying away from the computer is working: I'm nearly done with the Jamiejacket! I need to add a collar (which may involve alterations, as it seems larger than needed), sew the rear sides together with invisible zippers for the jersey pockets, add the front zipper, and both sleeves. It may sound like a lot still, but most of the hardest work is already done (I hope).

In the picture above, my beagle Grunt is "helping". You can see that the entire left interior is unsewn. In the last few days, that side is now complete. Then I had this random puzzle of flaps that could be draped over the shoulders like an ugly shawl- the interior and exterior were two separate parts because the lining had to be fully separated for the large handwarmer pockets. I've now completed sewing the front sides, where the handwarmer pockets zip closed, and now the puzzle is beginning to actually resemble an article of clothing!

I am convinced that a pin's goal in life is not to secure layer of fabric so that they can be sewn together, but rather to hide in any location imaginable with the intent of causing as much harm as possible to unsuspecting (and sore!) fingertips. It looks as if I have been warring with sharp things ( I sort of have been), the way my fingerprints are currently mangled. I never did figure out how to use thimbles, if you haven't guessed.

Again, though, this project is nearly finished, and that makes me excited. I was trying to catch up on blogs a few minutes ago, and I got impatient with the number of unread posts. I'll catch up later. I believe with a little bit of coffee or an energy drink, I can have this thing finished...tonight! I'm going to try, anyway. We shall see. 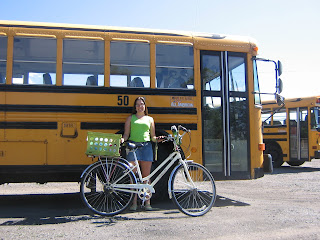 Also due to my own impatience, I will talk about the end of the school year in a later post (perhaps). There are a lot of emotions tied up in moving to a new place and leaving the old one behind, but I must get to sewing. This photo is the third one so far. I've taken a picture of myself with my bus each year I have driven so far. I hope there won't be any more buses with differing districts on the side- I think I'm ready to find my forever-home.

I hope Colorado is it.

And Happy Friday!!
Posted by Red-Eyed Tree Froggy at 7:05 PM