Have Trailer, will Haul

After yesterday's awesome day, I thought today being a workday would turn out comparatively boring. Not so!

I decided to wear a dress, firstly. I was too chicken to attempt the chill morning air with bare legs, so I wore my sweatery tights underneath. I don't have any dressy shoes which are not strappy sandals, so I was presented with another obstacle. A bus driver is usually required to wear shoes with covered toes and heels- no sandals, flip-flops, clogs or the like. I'm assuming the rule is to prevent shoes coming loose and interfering with the pedals, or perhaps to not impede movement during an emergency- when it would really not be a good idea to have to worry about your shoes coming off. So, I decided to wear my boots. They are brown and don't match, but I guess in the photo it doesn't look so odd as it seems when I'm looking down at my feet. 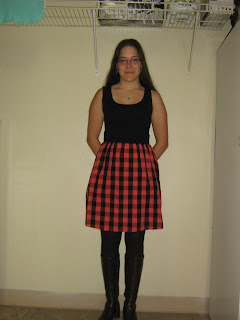 Good morning!
On the way home, I decided it was too warm for the tights. I swapped them for bike shorts, which I had planned to do. I wasn't thrilled with the way the skirt caught on them, so I decided that I didn't need anything to protect my modesty if I was wearing black underwear. It turns out that with only my skin to touch, the skirt behaved very well and didn't ride up embarrassingly at all. Yay!
For cooler shoes, I decided that water shoes were fine, even if they did have pink on them instead of red. Oh well.
Our car decided not to move at all this morning. I got back after an easy field trip as Jamie was trying to leave. He had decided to go to class early in case the car acted up- remember I mentioned the transmission being flaky? Well, the car was not in the mood to back out of the driveway at all, much less go to school. I ran to get my old backpack out of the closet while he got his folders out of the car, then while he was changing clothes I stuffed a water bottle in a pocket, rushed out to the garage, hooked up the air compressor and aired both the tires on Chainless. Then I watched somewhat nervously as he pedaled off. He did not have his brace on, and remember he just sprained his ankle a week ago.
He made it to school just fine, or so said his text message. He also asked me to stop by our friend's house to pick up the lawn mower after work.
So, I finished organizing the closet (no one told us that the Beagle is a nesting creature! he ruins any nice pile of folded clothing if he can get to it). I squeezed the trailer through the gap between car and wall, loaded up the bag of Goodwill items, then all the recycling on top of that. I pedaled to the Thunderbird grocery store and did all the recycling for $6.25. Three bags were unacceptable because they are a funky energy drink that came from Grocery Outlet. The stores with recycling centers only give deposits back for the brands they sell. Oh well.
Trailer now empty, I folded it and continued on to work to take the field trip kids back to school and drive my regular kids home. They behaved very well today too. The it was off to Tig's house to collect the mower. 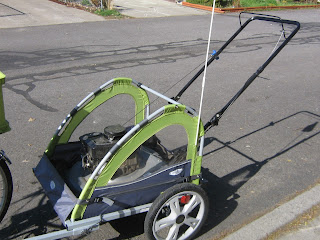 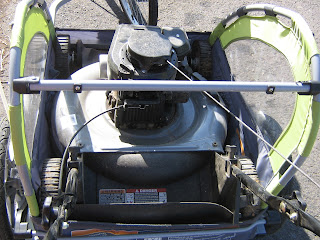 Had to twist it a teensy bit to get the bulbous blade housing past the bars, but it settled in just perfectly. 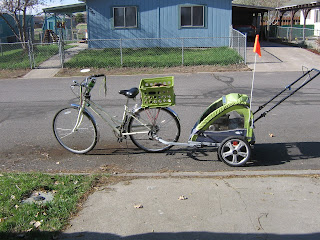 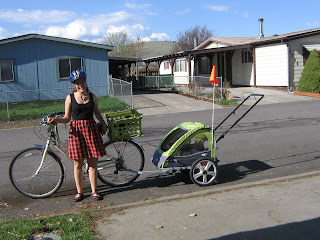 Whee!
Off we go.
I have determined that I absolutely must get a more stable kickstand if I want to keep doing fun wacky stuff like this (I do). The Pletscher Double Leg Kickstand is what I think I want. It folds up just like a regular kickstand! My bike fell over several times even with the trailer brake on.
Also, Jamie reported that his ankle hurt going to the school, but coming back home it was fine. Mostly the seat is what bothered him. I believe we have a leisurely stroll to Fred Meyer planned, perhaps we will pick up a cushier seat like he used to own.
Yay for a day of accomplishments!
Congratulations baby on your first commute!
Yay Mike for commuting by bike!
Yay Blue for walking (he rode his bike to work before any of us, and over an inter-coastal waterway bridge, even!)!
And RAWR for my hauling laundry, a dog, a child, recycling, clothing donations, and a lawn mower in two days!!
I win.
Posted by Red-Eyed Tree Froggy at 7:14 PM