This morning I stepped out to perhaps the deepest snow we've had so far this winter. It began falling, or being blown sideways at least, last night around ten o'clock or so. We had gone home at six to find the house completely dark because power was out. So, we promptly headed back out to Abby's, a pizza place where Tig and her parents were having dinner. Jamie played Magic by phone while I watched the outside world turn white. 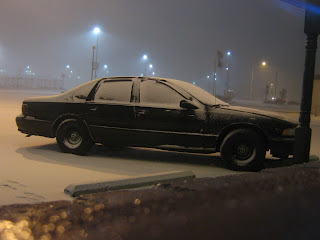 Snow starting to stick.
We went to bed by candle light all snuggled up with our puppies. I have new cozy pajamas from a really nice lady at work that were the perfect thing, too. At 1 am I woke up to all the lights coming back on and we had to turn them off again.
In the morning, I wasn't sure I'd be able to ride my bike. It was surprising to find everything under the porch covered in snow because of the fierce winds. 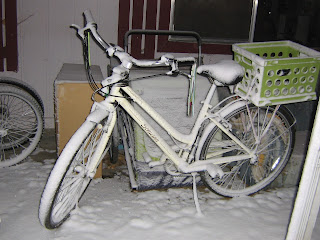 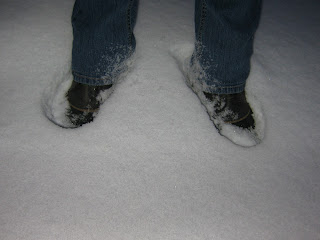 Some parts were as high as the snow on my jeans, and that's just outside the porch.
The ride to work went just fine, if slower than usual. I was worried about falling, but it didn't happen. The roads were covered in a layer of ice with snow packed over it, all packed down fairly smoothly. I only had trouble trying to accelerate after stopping at a stop sign because my rear wheel I think was spinning. My starts were more of a hop-along-and-go type rather than a stand-on-a-pedal-and-go thing. 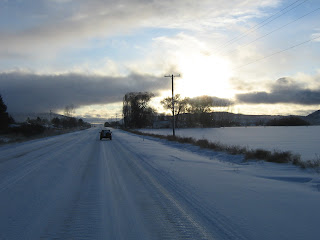 As I passed my best friend and co-worker, instead of saying good morning on the loudspeaker, I'm pretty sure she was yelling at me. She refused to let me bike home. Instead, we went to WalMart together. She got some things for a party later this year, and I got a bike chain for Chainless. Now he can really be like his namesake Toothless from How to Train Your Dragon (who wasn't toothless at all!).
I paid for the chain with money from taking all the recycling to the local Thunderbird grocery store yesterday morning before it got so windy. I found out how to lay the seat completely flat so I can use all the space in my little bike trailer. 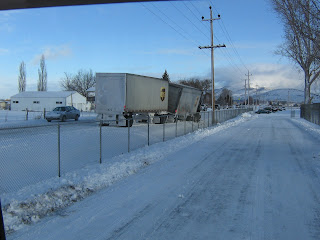 I can understand why she might have been worried for my safety, I suppose.
I am creating deck boxes with beaded decorations for the local game store. I'm nearly out of beads, though, and bad planning had me leave some of them at home when we went to the store today. I ended up watching Aladdin and The Little Mermaid with the owner's daughter instead.
All in all, I had a good day. How was yours?
Posted by Red-Eyed Tree Froggy at 10:24 PM