I found out this morning from another driver that tonight was the winter parade for Klamath Falls. Having meant to attend the winter choir concert (it was free) but not feeling up to it due to my cold, I was glad to find out I hadn't missed this fun opportunity. So I sent a text message at 6:23am to my roommate best friend Tig who I knew would be getting up soon. She left the car seat at home so I could take her daughter Marty and meet her downtown where she works. After some initial bummed feeling on my part due to both our boys not wanting to attend, we made a fun night out of it by ourselves anyway.

I attempted to document the parade, but I have no idea how to work my camera anymore, so pardon the bad photos. 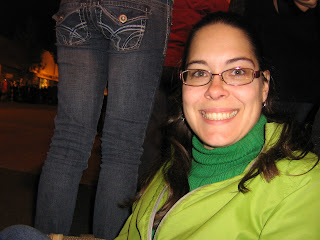 This is me. You can't see them like I hoped, but I have on really cute green sparkly Christmas tree earrings. The people behind me made it difficult to see very far down the road.
I was mostly interested in two things- buses and bikes. The pictures of everything else are so bad they aren't worth sharing. Bikes first: 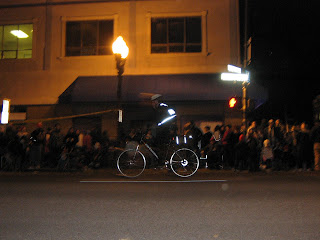 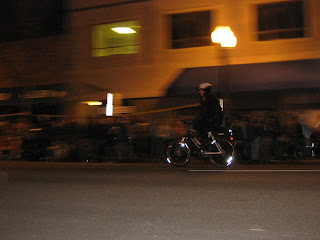 I tried valiantly to get pictures of the bicycle officers. They gave me plenty of opportunity, but I lack the skill. 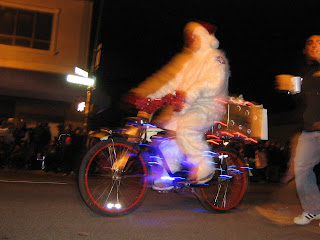 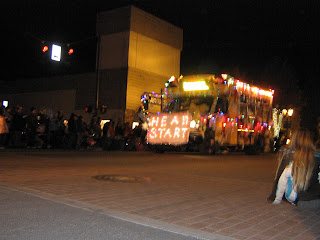 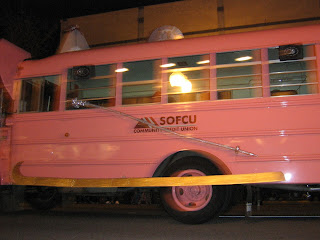 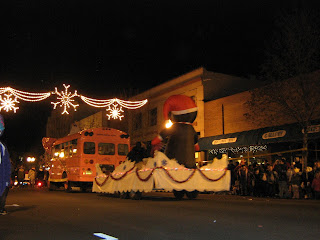 I wish MY bus was pink! I vote that be the new county color.
Maybe next year I will ask that we get a "float" to represent the student transportation department. I'll put people on the roof, though. Always wanted to stick my head out of a roof hatch!
And a couple other cool pictures. 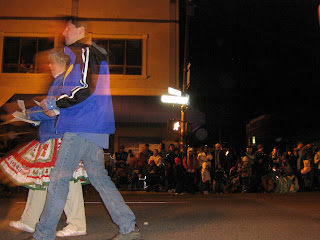 These dresses were so gorgeous.
The parade ended rather suddenly at 96 floats. There were two police cars and then lots of traffic behind them, so it wasn't hard to tell. We walked back to our cars, finding a garbage can along the way. My feet were cold the entire time and by that point them and my fingers were numb. I need better shoes.
Traffic was of course slow. I drove 10 miles per hour nearly the whole way home- I could have beaten me on a bike! But I had a great time and I'll go again next year. Marty has a few lollipops and candy canes.
Posted by Red-Eyed Tree Froggy at 9:45 PM